“Those who neglect to establish the integrity of an artifact’s provenance implicitly condone the looting and pillaging of historic sites around the world,” said District Attorney Vance. “Art galleries, auction houses, academic institutions, and collectors must be vigilant about recognizing and identifying signs of theft and trafficking. Today, my Office is returning yet another collection of stolen antiquities to their rightful owner. I encourage individuals to report items of questionable origin to my Office and our partners in law enforcement.”

Min. Plen. Francesco Genuardi, Consul General of Italy in New York, said: “On behalf of the Italian Republic, I wish to express my heartfelt thank you to the District Attorney of Manhattan, Cyrus R. Vance, Jr., the Manhattan DA’s Office, and Homeland Security Investigations (HSI) New York for achieving another important result in the fight against international smuggling of antique artefacts.

“The investigation activity carried out by the U.S. authorities in collaboration with the Italian Carabinieri led to the rescue of seven marvelous and valuable objects, among the others a Sardinian bronze ox dating back to the 8th century B.C.; a Sardinian bronze warrior dating to the 8th century B.C., and a Greek bronze Herakles dating to the 3rd or 4th century B.C. These items, stolen and illegally sold on the international market, will finally return to Italy and they will be permanently exhibited to the public in the museums of the regions where the objects belong.

“The artistic expression of every country is part of the global human heritage. Art, culture, and tradition should be protected and preserved from every possible threat through international cooperation. Cooperation between American and Italian forces has always been very effective and fruitful and this result is just another important example of it. I am therefore very thankful to the District Attorney’s Office and to the Homeland Security Investigations Office for the repatriation of these important objects and for their strong commitment towards law enforcement and international cooperation.”

Angel M. Melendez, Special Agent-in-Charge of Homeland Security Investigations (“HSI”) New York said: “I applaud the tremendous investigative efforts by the Manhattan District Attorney’s Office, the Consul General of Italy in New York, and our HSI Cultural Property, Art and Antiquities unit for working together to recover multiple high value Italian antiquities and returning them to the rightful nation. This is another example of what can be accomplished when law enforcement authorities in the U.S. and abroad partner to identify and recover historic, stolen works of art.”

In April, the Manhattan District Attorney’s Office seized six items from a gallery in Midtown Manhattan pursuant to a search warrant and as part of an ongoing joint investigation into international antiquities trafficking. The stolen artifacts recovered through the latest seizure, which are collectively valued at more than $90,000, include:

This month, the Manhattan District Attorney’s Office also seized an additional item pursuant to a search warrant from a different gallery in Midtown Manhattan. The recently recovered artifact is also being returned to the Italian Republic as part of the repatriation ceremony. 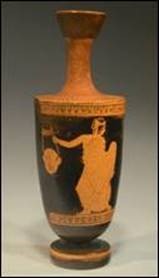 As part of the same investigation earlier this year, an ancient Etruscan vessel was returned to the Italian Republic and an ancient marble sarcophagus fragment was returned to the Hellenic Republic during repatriation ceremonies attended by respective representatives from Italy and Greece. Both items were recovered from the same gallery in Midtown Manhattan.

To date, the Manhattan District Attorney’s Office has recovered and repatriated numerous other historic items forfeited as part of criminal investigations and case resolutions:

Assistant District Attorney Matthew Bogdanos, Senior Trial Counsel, and Assistant District Attorney Christopher Hirsch handled the recovery of the artifacts. These recoveries were made possible through a joint investigation with the Italian Carabinieri Tutela Patrimonio Culturale and with the assistance of the following individuals: Angelo Ragusa, of the Rome Office of the Archaeological Section of the Carabinieri; Ms. Leila A. Amineddoleh, professor at Fordham University School of Law, St. John’s University School of Law, and New York University; and Dr. Christos Tsirogiannis, Affiliate Researcher at the Scottish Centre of Crime and Justice Research, University of Glasgow, and lecturer for the Association for Research into Crimes Against Art (“ARCA”) in Italy.

District Attorney Vance also thanked the Consulate General of Italy in New York, HSI New York, and in particular, Special Agent John Paul Labbat, for their assistance with the matter.