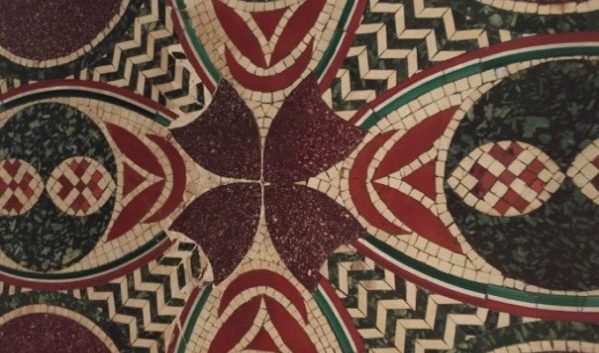 A Section of Mosaic Floor, Circa 35 A.D., Excavated from the Ships of Nemi

“Returning long lost relics to their rightful owners is at the core of my Office’s mission to end the looting of rare cultural treasures and trafficking of stolen antiquities,” said District Attorney Vance. “These items may be beautiful, storied, and immensely valuable to collectors, but willfully disregarding the provenance of an item is effectively offering tacit approval of a harmful practice that is, fundamentally, criminal.”

Ambassador of Italy to the U.S. Armando Varricchio said: “Protecting cultural heritage is a top priority for Italy, as well as a hallmark of Italian foreign policy. Italy is committed to encouraging the international community to be increasingly aware—and engaged—on this, and to taking concrete steps to protect that which belongs to us all. Italy and the U.S. are united in many fields, including the need to fight trafficking of archaeological material.”

In September, the Manhattan District Attorney’s Office seized a section of ancient mosaic flooring pursuant to a search warrant and an ongoing joint investigation into the trafficking of stolen antiquities. The marble flooring section, which dates back to 35 A.D., was originally part of an ornate ship commissioned by the Roman emperor Caligula at Lake Nemi. Following the emperor’s assassination, the ship sank and remained underwater for nearly 2,000 years, until it was excavated in the 1920s. In 1936, the Ships of Nemi Museum was completed to display the ships and the items excavated from them, including the sections of the inlaid mosaic marble floor. The Museum was later used as a bomb shelter during World War II and many of the original tiles were subsequently destroyed or damaged by fire, rendering the mosaic floor piece one of the only known, intact artifacts of its kind from the Ships of Nemi.

Earlier this year and as part of the same investigation, the Manhattan District Attorney’s Office seized a Paestan red-figure bell-krater, a wide, round wine vessel circa 360-350 B.C., from the Metropolitan Museum of Art, as well as a Campanian red-figure fish-plate, circa 340-320 B.C., from a Christie’s auction.

All the items were seized pursuant to judicially authorized warrants, but were thereafter forfeited willingly once the owners were presented with the evidence that each had been stolen from Italy.

Within the last year, the Manhattan District Attorney’s Office has also seized and returned several other stolen artifacts to the Italian Republic, including:

Assistant District Attorney Matthew Bogdanos, Senior Trial Counsel, and Assistant District Attorney Christopher Hirsch handled the recovery of the artifacts. These recoveries were made possible through a joint investigation with the Italian Carabinieri Tutela Patrimonio Culturale and with the assistance of Christos Tsirogiannis, Affiliated Researcher at the Scottish Centre for Crime and Justice Research, Department of Criminology, University of Glasgow.

District Attorney Vance also thanked the Consulate General of Italy in New York and HSI New York, in particular, Special Agent John Paul Labbat, for their assistance with the matter.