District Attorney Vance said: “158,000 New Yorkers now make up our city’s construction workforce. It’s these workers who build and grow our city, and it’s these workers who pay the price when construction supervisors cut corners in order to build faster. In doing so, they not only endanger the lives of their workers, but the lives of the pedestrians and cyclists that live and work around these sites every day. As alleged in this case, these defendants knowingly skirted DOB safety protocols to speed up their project, resulting in devastating, life-changing injuries for two workers when a mini crane fell from the fourth floor, catapulting one as it hurtled to the ground. As the use of these remotely operated, lightweight cranes continues to grow, contractors must ensure their workers are trained and their plans are DOB-approved, and always make sure these dangerous pieces of equipment are securely tethered. Those who fail to follow building regulations and recklessly kill or maim their workers will be criminally prosecuted.”

DOB Commissioner Rick D. Chandler, PE, said: “This was one of the most appalling safety lapses in recent memory: the supervisors of this site were supposed to be responsible for safety, but instead they set in motion a reckless and potentially lethal chain of events. Their callous disregard for safety rules, combined with a wildly overtaxed mini-crane, nearly cost several workers their lives. I thank District Attorney Vance and our partners at the Department of Investigation, with whom we worked closely on this investigation. This multi-agency effort reflects the city’s commitment to use all the tools at our disposal to protect construction workers and the public.”

DOI Commissioner Mark G. Peters said: “This investigation underscores a critical message: Contractors who disavow City construction rules will be held to account. Shortcutting the rules costs lives, endangers workers and construction, and is a no-win situation when it comes to the safety of New Yorkers. DOI will continue to partner with the Manhattan District Attorney’s Office to expose construction fraud and protect the safety of this City.”

Port Authority Inspector General Michael Nestor said: “The Port Authority Inspector General’s Office is honored to be a member of the DA’s Construction Fraud Task Force and working with its other distinguished members on helping to maintain the integrity of the construction industry in New York City. The Port Authority has a huge capital construction program that includes construction projects at many of our facilities, including major redevelopment programs at each of our three largest airports. In addition to investigating and prosecuting those that would compromise the integrity and safety of construction projects and the public, the Task Force works to implement reforms and new compliance standards that would benefit everyone involved in the construction industry, and most importantly, the public. I want to thank DA Vance for his strong leadership in this area and thanks to his superb staff for their dedication and hard work.”

MTA Inspector General Barry Kluger said: “The Construction Fraud Task Force under the leadership of District Attorney Vance has achieved impressive results in its aggressive pursuit of wrongdoing in the construction industry, including indictments, convictions, grand jury reports, forfeitures, and restitution. As demonstrated by today’s indictments, construction-related crimes extend beyond fraud and often implicate serious safety consequences for both workers and the public. The Task Force has expanded its focus to encompass the safety risks presented by hazardous construction practices. My office will continue its active membership and devote the necessary resources to this vitally important Task Force.”

Occupational Safety and Health Administration (“OSHA”) Area Director Kay Gee said: “OSHA will continue to work with our federal, state, and local law enforcement colleagues to achieve safe and healthful workplaces by ensuring that employers comply with our agencies’ applicable laws and regulations, and by holding employers accountable if they disregard their safety and health responsibilities.”

The defendants’ employer, WESTERN WATERPROOFING COMPANY INC., d/b/a WESTERN SPECIALTY CONTRACTORS (“WESTERN”), a union contractor based in Saint Louis, Missouri, cooperated in the investigation and subsequently entered into a Deferred Prosecution Agreement (“DPA”). In the DPA, the company agreed to retain an independent monitor, enhance safety training for its workers, and fund public service announcements in English and Spanish to educate workers around New York about their right to a safe workplace. 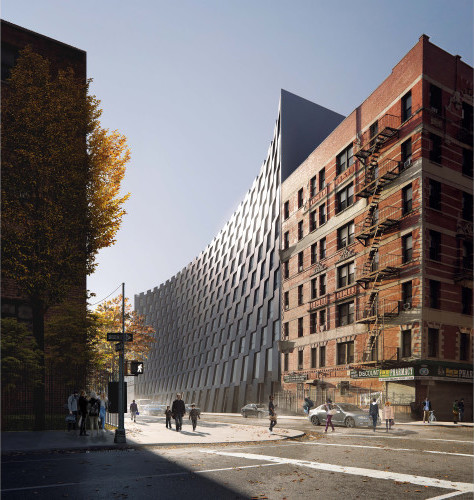 In 2016, Blumenfeld Development Group, the owner of the Gotham Residential Project – located between Lexington and Third Avenues from East 125th to East 126th Streets – hired ZDG, LLC, as the construction manager to build an eleven-story mixed used building. ZDG hired subcontractor WESTERN to install the building’s façade, including a checkerboard curtain wall with alternating blackened stainless steel panels and glazed window panels on the building’s north side.

In July 2017, in response to the increased use of “mini cranes” in New York City, DOB announced stricter regulations requiring crane operators to be trained for the specific make and model of the crane they operate, in addition to the existing requirement that contractors submit engineer’s plans demonstrating how the mini crane will be used – including where it will be tethered – before work may commence.

On June 15, 2018, BRAICO, the senior branch manager of WESTERN’s Ridgefield, New Jersey, branch, ordered a mini crane to be delivered to the Harlem worksite – even though none of the workers were trained to operate it – without obtaining the requisite DOB-approved engineer’s plans to ensure its safe use.

EDWARDS directed ironworkers Christopher Jackson and Jorge Delgado, members of the Ironworkers Local 580, to work from the floor below the crane, guiding the panels into place as the crane operator hoisted them up. As the crane lifted a heavy glass panel, it lurched forward and capsized before falling to the ground. As it fell, the crane’s boom reached into the third floor, where it knocked into Mr. Jackson, broke his harness, and catapulted him to the ground. Mr. Jackson suffered severe trauma to his head, resulting in a traumatic brain injury which has affected his ability to speak and to walk. Mr. Delgado was struck in the back, and suffered severe spinal injuries impairing his ability to walk and move.

In 2015, the Manhattan District Attorney’s Office formed the Construction Fraud Task Force with partners in law enforcement, including the Port Authority, the MTA, and DOI, to investigate and pursue criminal cases against individuals and companies who endanger the safety of others and undermine the integrity of the construction industry.

Following a series of successful trial convictions related to the death of worker Carlos Moncayo, District Attorney Vance created the Construction Safety Community Project to train workers to recognize workplace safety hazards and signs of fraud, and proactively report them to law enforcement. To date, the Construction Fraud Task Force has conducted more than 60 presentations across the city for more than 2,500 construction workers.

How to Report Worksite Safety Violations

Workers are encouraged to send tips related to wage theft and dangerous work sites directly and anonymously to the Manhattan District Attorney’s Office through WhatsApp at (646) 712-0298. These reports may be investigated by members of the Construction Fraud Task Force, which has secured a number of notable convictions and has previously returned approximately $1.4 million in stolen wages to workers.

[1] The charges contained in the indictment are merely allegations, and the defendants are presumed innocent unless and until proven guilty. All factual recitations are derived from documents filed in court and statements made on the record in court.