“Luis Acevedo contributed to the proliferation of illegal guns and drug trade by having these dangerous weapons and controlled substances,” said District Attorney Bragg. “Today, we are ensuring accountability and will continue to work with our law enforcement partners to identify and root out this activity.”

As admitted in the defendant’s guilty plea, ACEVEDO possessed seven loaded firearms, two loaded assault weapons and more than an eighth of cocaine with the intent to sell it.

A search warrant uncovered the loaded firearms in his East Harlem apartment, as well as the cocaine, digital scales and other drug paraphernalia including small baggies. 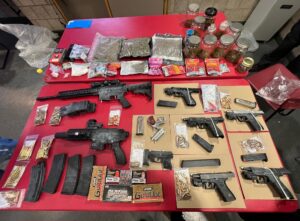 District Attorney Bragg thanked members of the NYPD, particularly from the Housing Bureau Police Service Area 5 Field Intelligence Office, for their extraordinary efforts in this case.