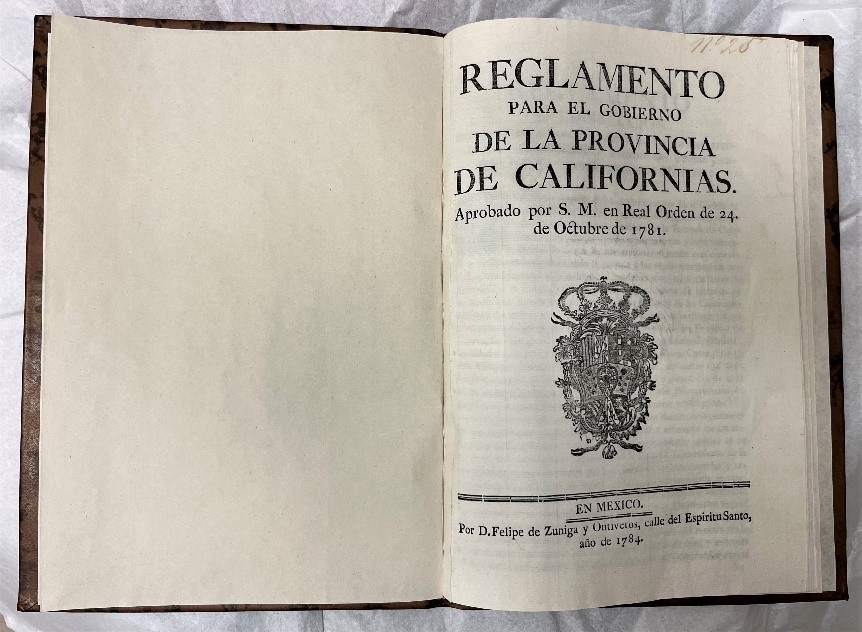 “This book was literally ripped from its original binding and sold for profit, and we are pleased to return it to where it rightfully belongs,” said District Attorney Bragg. “The Reglamento provides a unique look into the legal and political history of the continent and is an important tool for studying and learning from the past. Importantly, the Reglamento will now sit in Mexico’s national library with its full volume.”

Jorge Islas, Consul General of Mexico in New York said, “On behalf of the government of Mexico, I extend my deepest gratitude to the District Attorney’s Office, its whole team at the Antiquities Trafficking Unit, and the Department of Homeland Security, for their hard work in the recovery of the first edition of the 1781 Reglamento para el Gobierno de la Provincia de Californias. This piece holds a priceless historical and cultural value for the people of Mexico and will be repatriated immediately to its homeland. Please receive my most sincere thanks to everyone involved in the process of combating the illegal trafficking of antiquities who made this possible.”

Homeland Security Investigations (HSI) New York Acting Special Agent-in-Charge Ricky J. Patel said: “The pages of this artifact are centuries old, telling a story of a time before the Mexican-American War, when California was a part of Mexico.  These excerpts, published during the Spanish Colonial period, state the regulations for the government of the Province of California and are an integral part of the rich history of Mexico.  HSI is proud to stand with the Manhattan District Attorney’s office today to preserve cultural history and return these pages to their rightful home country of Mexico.”

The Reglamento is from a first edition book of the penal code from then Spanish-controlled California. The book is property of the United Mexican States and was housed for decades in Mexico’s national library, Archivo General de la Nación, in Mexico City. The investigation determined that the book was stolen from Archivo General de la Nación, where a thief used a knife to cut the book out of a larger volume. The Reglamento was then re-bound and smuggled from Mexico into the United States. In 2021, the piece arrived in New York for sale at a New York-based auction house before it was seized by this Office on March 10, 2022. The investigation found that there were numerous attempts at providing false provenance in order to facilitate the sale of the book in the United States. The Reglamento was seized as part of an ongoing investigation into Stolen Central and South American Art.

District Attorney Bragg thanks the Consulate of Mexico in New York for their assistance.