Read the Full Report on the 55,000 Kits Tested Through D.A.’s Investment, with Recommendations for Legislative Action 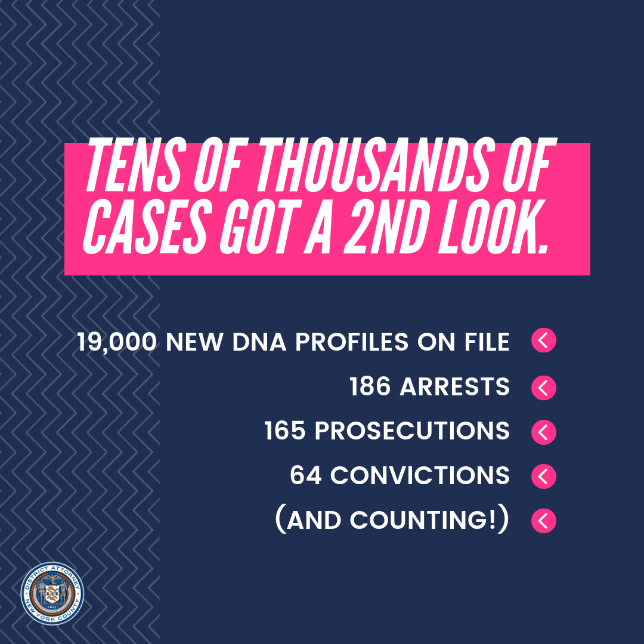 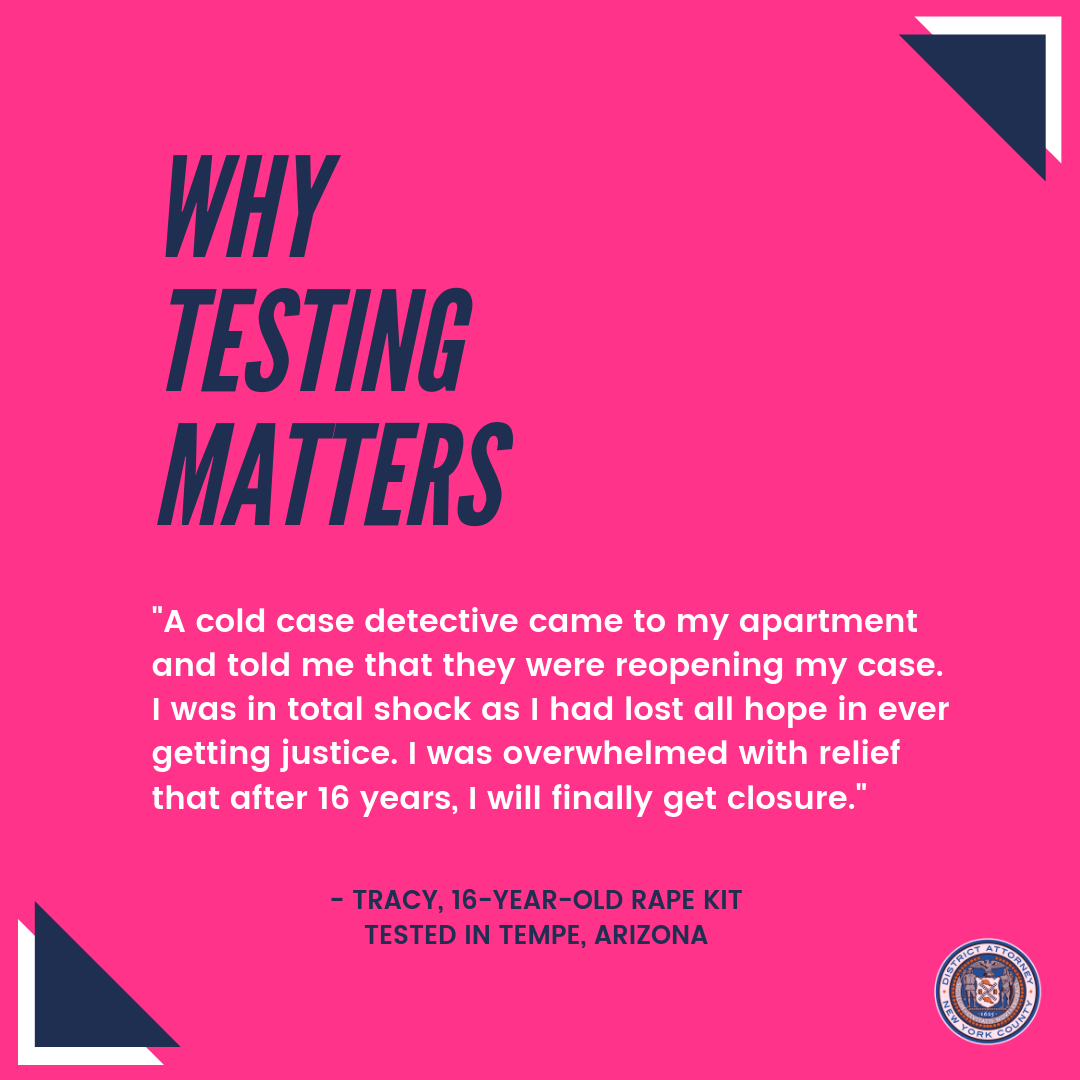 “Testing every rape kit is our best practice and our moral imperative – both to ensure survivors receive the support and action they deserve, and to ensure that these backlogs never happen again,” said District Attorney Vance. “With our $38 million investment, we have begun to rectify what has been a tragic failure of government and law enforcement at all levels – a decades-long, systematic denial of equal rights for women in the justice system. As we know from our experience clearing New York City’s backlog, the testing of these 55,000 kits will continue to produce new investigations, arrests, and prosecutions in cities and states across the country for years to come. Dedicated funding streams are necessary to end the backlog, but they are not sufficient – states must also rewrite their laws. Today we’re calling on states across the country to mandate the timely testing of rape kits, and to eliminate statutes of limitation for felony sexual assault.”

Sexual assault survivors from Tempe, Arizona; Tucson, Arizona; Calhoun County, Michigan; and Flint, Michigan, whose rape kits were tested through the D.A.’s investment, spoke about their experiences, and lent their voices to the D.A.’s call for legislative reform to prevent future backlogs. The Office also released a report detailing the program’s results and lessons learned, which can be viewed here.

Rep. Scott Holcomb, Georgia House of Representatives, said: “It’s not every day that a project, or a grant, leads to a national movement for change. But that’s exactly what happened with the grants provided by the Manhattan District Attorney’s Office to address the backlog of untested sexual assault kits. This grant was the catalyst for lasting change across the nation and in my home state of Georgia, and I am extremely grateful to be here to thank District Attorney Vance and his team for their leadership on addressing the sexual assault kit backlog. This effort to pursue justice for survivors has led to new policies, the testing of thousands of kits, the identification of serial rapists, and leads that will help to solve cold cases.”

Ilse Knecht, Policy & Advocacy Director for the Joyful Heart Foundation, said: “When we were given the opportunity to work with the Manhattan District Attorney’s Office to think through what an impactful investment in rape kit reform could be in 2014, we had no idea what was ahead of us. It was D.A. Vance and his team that kick-started so much of what we are seeing play out nationwide. We are so proud to celebrate today’s accomplishments, but know that we still have work to do to fully realize the opportunity that the Manhattan D.A.’s Office created. Even now, years after resources and attention have been invested to bring this issue into the light, there is still a refusal by some states to address their backlogs of untested rape kits. We will continue to work with partners nationwide to pass comprehensive reform.”

Karol V. Mason, President John Jay College of Criminal Justice, said: “The work of the Manhattan DA’s office and its many partners nationwide has revolutionized our approach to how we respond to sexual assault crimes and support survivors. At John Jay College of Criminal Justice, we are proud to educate future forensic scientists and law enforcement officers who will continue this very important work, bringing justice to many survivors who thought they would never see it.” 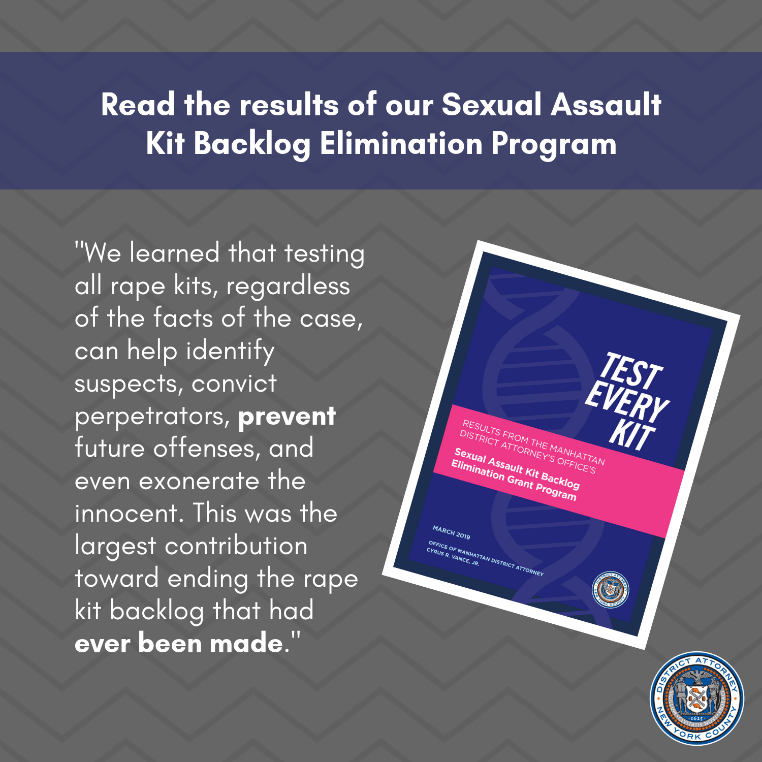 As described in the Test Every Kit report released today, “between September 2015 and September 2018, 32 jurisdictions in 20 states received funding from the Manhattan District Attorney’s Office to test roughly 55,000 backlogged kits, generating DNA evidence that will help solve crimes for decades to come. By testing their backlogged kits, these jurisdictions have bolstered a national DNA databank, identified suspects, convicted perpetrators, prevented future offenses, and brought long-awaited justice to survivors.”

The report includes case examples from jurisdictions that made new arrests, as well as breakdowns of each jurisdiction’s results thus far. The report concludes by urging states to “(1) enact legislation that mandates and funds rape kit testing; and (2) further integrate victim-centered and trauma-informed approaches into their practice,” in order to prevent future backlogs and ensure that survivors of sexual assault receive the support they need.

Case Study – Tucson Police Department (Arizona): In 2005, a Tucson Police Department detective entered Nathan Loebe’s DNA profile into the local CODIS databank. Loebe was a suspected sex offender, though a prosecution against him did not proceed at that time. A decade later, the Tucson Police Department sent roughly 1,400 previously untested sexual assault kits for testing through this grant program. Of those kits, three hit to Loebe’s DNA profile. The DNA from these kits also connected Loebe to cold cases in Massachusetts and Colorado. Tucson Police initiated a full-scale investigation into these assaults and discovered that, for years, Nathan Loebe had impersonated Brian Bonsall, an actor on the popular sitcom Family Ties, to assault women he met on online dating sites. Law enforcement arrested and charged Loebe for a separate assault in Kentucky. He was then extradited back to Arizona where he was found guilty of twelve counts of sexual assault, five counts of kidnapping, three counts of stalking, and one count of attempted sexual assault.

In November 2014, District Attorney Vance announced an unprecedented investment to fund the testing of tens of thousands of rape kits sitting in storage facilities across the country – representing what was then the single largest contribution toward ending the national rape kit backlog that had ever been made. D.A. Vance called upon Congress to match this investment, and the next month, the Department of Justice’s Bureau of Justice Assistance (“BJA”) announced a separate, but complementary, $41 million Sexual Assault Kit Initiative Grant Program. In total, since 2015, BJA has committed $154 million to 54 jurisdictions across 35 states.