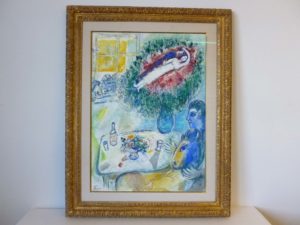 Manhattan District Attorney Cyrus R. Vance, Jr., today announced the sentencing of TIMOTHY SAMMONS, 63, a former art sales agent operating in New York and London, to 4-to-12 years in prison for stealing at least $10 million dollars through a criminal scheme involving the sale of valuable artwork. On July 2, 2019, the defendant pleaded guilty to all fifteen counts in the New York Supreme Court indictment against him, including Grand Larceny in the First and Second Degrees and Scheme to Defraud in the First Degree.

“When brokering the sales of high-priced, one-of-a-kind paintings, Timothy Sammons had lying, scamming, and stealing down to a fine art,” said District Attorney Vance. “For years, the defendant peddled a deceitful, money-spinning scheme, garnering the trust of prospective buyers and sellers only to defraud them of millions and use the ill-gotten gains to fund his lavish lifestyle. But now, thanks to my office’s Major Economic Crimes Bureau and our partners overseas, his fraudulent conduct has come to an end and he’ll face a significant jail sentence for his larcenous crimes.”

According to the documents filed in Court and the defendant’s guilty plea, SAMMONS, a former art sales agent who previously worked for Sotheby’s in New York City, owned and operated his own fine art business – Timothy Sammons Fine Art Agents – with offices in London, Zurich, and in New York. In his role as an art agent, SAMMONS represented sellers of art works either through private sales or by sending the works for auction.  When a work was to be sold privately, the seller gave the work to SAMMONS with the understanding that SAMMONS would seek a potential buyer, collect a commission, and then remit the remaining proceeds of the sale back to the seller.

Between 2010 and 2015, SAMMONS brokered the sale of multiple pieces of art on behalf of his clients at auctions and private sales, but failed to turn over the corresponding proceeds of those sales to the owners. In many cases, SAMMONS misled his victims about the timing of the sales or failed entirely to inform them that their artwork had been purchased. When victims inquired about the status of their artwork, the defendant responded by asking them to be patient or ignored them entirely. In some instances, SAMMONS used the proceeds from the sale of artwork owned by one victim to pay debts owed to other victims. The defendant also used victims’ artwork as collateral to obtain personal loans from a financing company based in New York, and when SAMMONS failed to repay these debts, many of the works were sold at discounted prices. SAMMONS also used the proceeds of the sales of the art personal expenses, including first-class travel, hundreds of thousands of dollars in payments to his American Express Centurion Card, and expensive private club memberships.

In total, SAMMONS stole between $10 million and $30 million from more than four victims in the U.S., U.K., and New Zealand through the scheme, which involved multiple pieces of famous art including “Buste de Femme” by Pablo Picasso, “Reverie” by Marc Chagall, and “Calanque de Canoubiers (Pointe de Bamer)” by Paul Signac, as well as works by Luciano Fontana, Rene Magritte and Giorgio Morandi, among many others.

District Attorney Vance also thanked the City of London Police, and in particular, Detective Sergeant Ian Kellaway, for their assistance with the investigation.