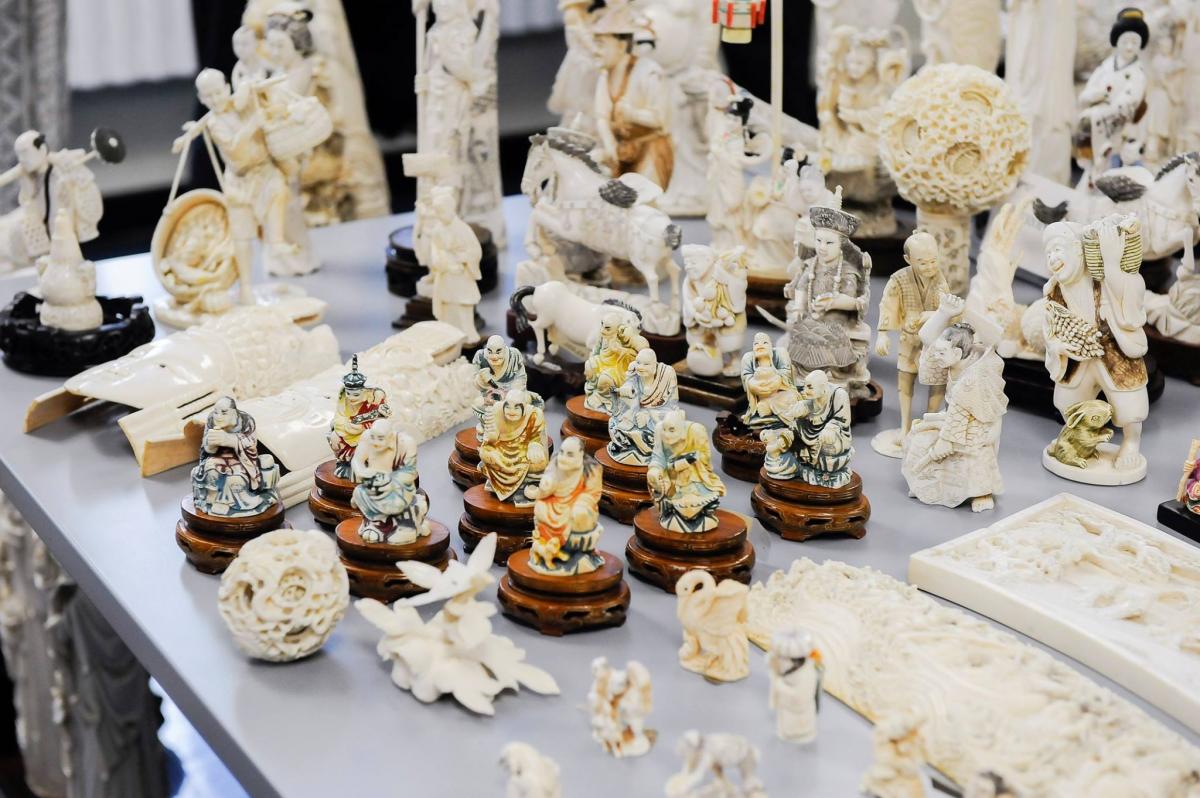 Manhattan District Attorney Cyrus R. Vance, Jr., today announced the guilty pleas of an antiques store and its owners for selling and offering for sale illegal elephant ivory at a total price of more than $4.5 million. IRVING MORANO, 47, SAMUEL MORANO, 49, and METROPOLITAN FINE ARTS & ANTIQUES INC. pleaded guilty in New York State Supreme Court to varying degrees of Illegal Commercialization of Wildlife. As part of their sentence, the defendants forfeited all of the ivory articles that were seized during the investigation, as well as an additional 1,657 ivory carvings, and were collectively ordered to forfeit $2,000 to the New York State Department of Environmental Conservation and make a $200,000 contribution to two wildlife conservation organizations – $100,000 to Wild Tomorrow Fund and $100,000 to World Wildlife Fund – for use in their endangered species protection projects.

“When a search warrant was executed at Metropolitan Fine Arts & Antiques, more than $4.5 million of ivory from more than a dozen slaughtered elephants was recovered – making this the largest seizure of illegal elephant ivory in New York State’s history,” said District Attorney Vance. “Even with tougher laws enacted in 2014, New York remains one of the largest markets for illegal ivory in the country. My Office and our partners at the New York State Department of Environmental Conservation and the Wildlife Conservation Society remain committed to doing our part to protect these endangered animals from wildlife crime and end the sale of illegal ivory in New York.”

Basil Seggos, Commissioner of the New York State Department of Environmental Conservation, said: “When Governor Cuomo signed a new law in 2014 that strengthened the criminal and civil penalties for buyers and sellers of illegal ivory, it gave DEC the power to take aggressive action on eradicating this immoral trade in New York State. With the closure of this case, we are sending a strong message to poachers, traffickers, and dealers that we are committed to stopping this heinous activity. I commend our Environmental Conservation Officers, District Attorney Vance and his staff, and the Wildlife Conservation Society for working to bring these lawbreakers to justice.”

John Calvelli, Executive Vice President for Public Affairs at the Wildlife Conservation Society, and Director of the 96 Elephants Campaign, said: “At the Wildlife Conservation Society, we commend the teams of District Attorney Cyrus R. Vance, Jr., and the New York State Department of Environmental Conservation Commissioner Basil Seggos for working together to show that New York State has zero tolerance for illegal elephant ivory sales. The prosecution of these cases sends a strong signal that New York is a leader in stopping illegal wildlife trade. New York State was one of the first states to ban ivory sales and it is clear our officials are serious about enforcing this law which is designed to ensure Africa’s elephants do not go extinct.”

According to court documents and statements made on the record in court, METROPOLITAN FINE ARTS & ANTIQUES (“MFAA”) is an art and antiques gallery located at 10 West 57th Street in Midtown Manhattan. Owned by brothers IRVING and SAMUEL MORANO, it has sold elephant ivory articles and carvings since at least 2007.

Under the New York State Environmental Conservation Law, it is illegal to sell, or offer for sale, elephant ivory unless the seller has been granted a license from the DEC. In 2014, with the support of District Attorney Vance, DEC, WCS, and others, Governor Cuomo enacted new restrictions which effectively banned the sale of ivory articles except in very limited circumstances, and strengthened penalties for sellers. [1]  Although the defendants had previously held licenses to sell elephant ivory, these statutory changes made it effectively impossible for the defendants to renew their license, and the defendants did not attempt to renew it. Instead, the defendants continued to sell elephant ivory without a license.

A search warrant executed at MFAA uncovered approximately 126 elephant ivory articles, including two pairs of uncarved elephant tusks – standing approximately seven- and five-feet tall. DEC determined that the smaller pair of tusks were from an African savannah elephant, and that the elephant was a young adult when it died. The retail prices listed for the tusks were $200,000 and $150,000.

The tusks will be among the illegal elephant ivory items totaling one-ton that will be destroyed in New York on August 3, 2017. The event, taking place on World Elephant Day at 10:30 a.m. in Central Park, is being organized by WCS and DEC, with support from Tiffany & Co., a member of the U.S. Wildlife Trafficking Alliance, and will feature District Attorney Vance as a guest speaker.

[1] Under these stricter rules, a license to sell ivory would only be granted when: the ivory is part of an antique that is at least 100 years old and the ivory is less than 20% by volume of that antique; will be used for scientific or educational purposes; is sold as part of a trust or an estate; or is part of a musical instrument manufactured before 1975. Like elephant ivory, the sale of mammoth ivory is illegal under New York law. However, the ban on mammoth ivory was not enforced until June 2016.

Convicted:
• Illegal Commercialization of Wildlife, a class A misdemeanor, one count