“Domestic violence is pervasive and deeply entrenched in our culture – it cannot be defeated by prosecutors alone,” said District Attorney Vance. “This crisis demands – and survivors deserve – a comprehensive, cross-sector battle plan that brings together City agencies, law enforcement, victim service providers, and the advocacy community. That is why my Office partnered with dozens of stakeholders for our Domestic Violence Initiative, seeking their input and critical thinking over the course of two years. Together with our partners, we are already implementing many of the group’s recommendations, and dedicating millions in funding towards initiatives to empower survivors. But as this report makes clear, our work has only just begun.”

NYPD Commissioner James O’Neill said: “The NYPD welcomes the opportunity to work with our criminal justice and nonprofit partners in taking our efforts to combat domestic violence to the next level. I applaud Cyrus Vance for his commitment and leadership in this important issue.”

Mayor’s Office to Combat Domestic Violence Commissioner Cecile Noel said: “Thank you to District Attorney Cyrus Vance and Executive ADA and Chief of the Special Victims Bureau Audrey Moore for convening this collaboration and creating recommendations to enhance responses to domestic violence. We are grateful for the innovative and groundbreaking initiatives, including implementing alternative light source technology that will allow law enforcement to strengthen criminal prosecutions with enhanced evidence collection tools.  The Office to Combat Domestic Violence looks forward to a continued partnership with the Manhattan District Attorney’s Office around the issue of domestic violence.”

Ariel Zwang, CEO of Safe Horizon, said: “Safe Horizon applauds District Attorney Cy Vance for his continued leadership in responding to domestic violence and child abuse. We know how crucial collecting evidence is to holding abusers accountable, and as such, we welcome this opportunity to access new technology which can help us to keep New York City’s children safer.”

District Attorney Vance created the Domestic Violence Initiative (“DVI”) in Fall 2014 to bring together experts and practitioners from multiple disciplines, recognizing that domestic violence is too complex, multi-faceted, and ingrained to be addressed by any one sector. In consultation with more than 50 stakeholders, DVI established working groups to make recommendations in areas including community- and hospital-based interventions; prosecutors, criminal court, and family court proceedings; abuser accountability and engagement; proposed legislation, and more. 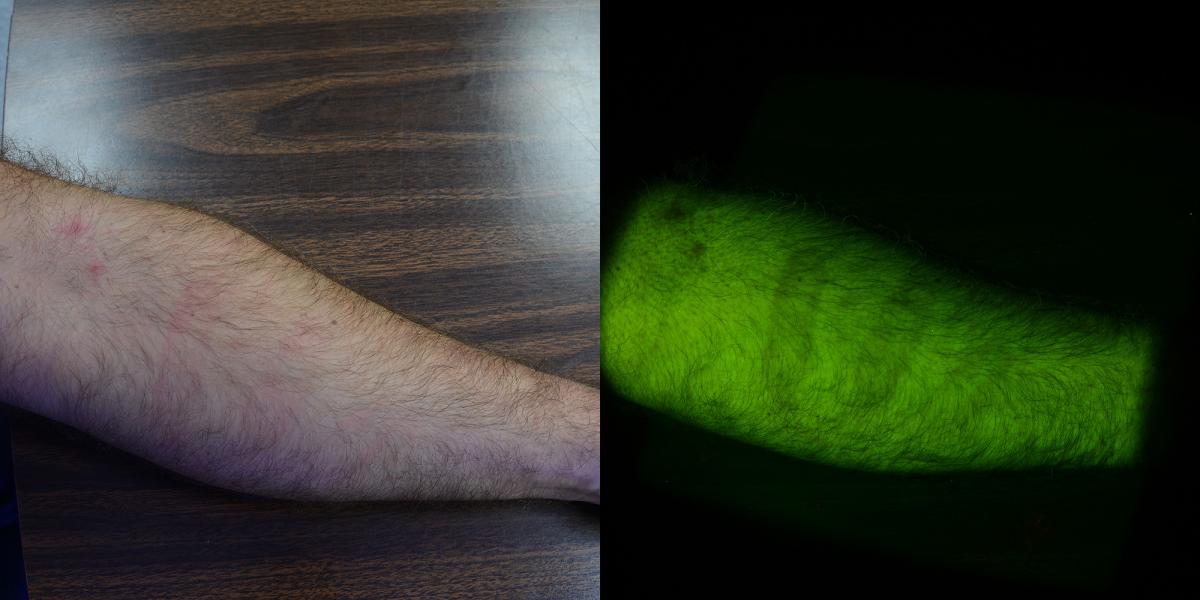 Pictured (Above and Below): Images of Finger-Shaped Bruising Seen With and Without Use of Alternative Light Source Technology. Credit: SPEX Forensics of Edison, NJ.

Law enforcement officers are frequently the first point of interaction between a domestic violence victim and the criminal justice system. Victims are often traumatized, and frequently unwilling to take the stand against their abusers. In these cases, absent the testimony of the victim, physical evidence is critical to hold perpetrators accountable. The DVI report recommended significant improvements to evidence collection, including the use of Alternative Light Source (“ALS”) technology.

The handheld ALS equipment features a lamp that filters light into individual wavelengths in order to capture below-the-skin bruising normally invisible to the naked eye. ALS technology will help corroborate victims’ accounts, particularly in strangulation cases where bruising is rarely visible on the skin’s surface, as well as cases with victims who have darker skin tones. ALS technology has also been shown to detect bruising from injuries that are weeks old, which may enhance cases where victims report an assault several days after the incident, or in child abuse cases.

In the pilot program announced today, the Manhattan District Attorney’s Office will equip prosecutors in the Manhattan Family Justice Center and Manhattan Child Advocacy Center with handheld ALS devices. Additionally, the Manhattan District Attorney’s Office will be equipped with a dedicated camera capable of taking infrared photographs to better memorialize these injuries. While domestic violence and child abuse cases are the focus of this pilot program, the use of this technology may be expanded to strengthen prosecutions of other crimes as well.

The DVI report also recommends holding domestic violence offenders accountable for their actions through programs that seek to change the attitudes and behaviors that contribute to abuse, while incorporating the perspectives of survivors. The Manhattan District Attorney’s Office will seek proposals in the coming weeks through its Criminal Justice Investment Initiative (“CJII”) for an Abusive Partner Intervention Program that incorporates a trauma-informed approach, as well as information from experts about the potential to incorporate restorative justice concepts into law enforcement’s work with abusive partners and survivors.

An effective intervention program employing a trauma-informed approach will incorporate best practices for working with abusive partners and with survivors of trauma. Research suggests a link between the experience of childhood trauma and adversity, and perpetration of future domestic violence. Incorporating these best practices may increase the likelihood that the abusive partner will be receptive to and engage in meaningful and sustained behavior change, maximizing the effectiveness of the intervention.

In addition, the District Attorney’s Office is also seeking information from experts and practitioners about ways in which domestic violence survivors could play an active role in these programs, with a focus on concepts of restorative justice.[1] Restorative justice models involving the presence of a victim may be suitable in instances where survivors of domestic violence remain in contact or in a relationship with an abusive partner. Recognizing that this is true in many domestic violence cases, the Office is committed to learning more about ways to improve the safety, wellbeing, financial stability, and medical and mental health of those in abusive relationships. The District Attorney’s Office will explore whether and how these approaches might be used in New York City.

Applicants will be invited to propose new programs, or to expand on existing programs. The District Attorney’s Office will provide total funding of up to $1.4 million over three years.

Expanding Access to Services: In June, the Manhattan District Attorney’s Office issued a Request for Proposals for initiatives that would better enable victims of crime to access services tailored to their needs. Domestic violence and other types of abuse increase the likelihood of mental health issues, negatively affect occupational functioning, and adversely affect social relationships. Although supportive services have the potential to mitigate these risks, victims access and use these services at low rates. This is especially true among groups such as immigrants; LGBTQ individuals; individuals who are deaf or hard of hearing; individuals with disabilities; and men of color. Victims may face roadblocks such as stigmas; a lack of culturally-appropriate services, or a lack of awareness about them; or fear of retaliation, harassment, or deportation. Funded programs will help victims navigate existing services, raise awareness of the resources available to different populations, or promote engagement with these communities. Applications are currently being reviewed, and grants will be announced in early 2017.

Child Trauma Response Team: The DVI recommended new programming to address the negative impact of children’s exposure to domestic violence. The District Attorney’s Office invested $1.05 million in the creation of the Child Trauma Response Team, a project that brings NYPD officers and mental health professionals together in the aftermath of severe domestic violence incidents to coordinate an immediate, trauma-focused response to support these children, immediately connect them with critical services, and prevent the onset of post-traumatic stress disorder. The initial pilot program, which focuses on Harlem communities, coordinates members of the NYPD’s 23rd Precinct, the Manhattan District Attorney’s Office, and services provider Safe Horizon to provide immediate intervention to these children. 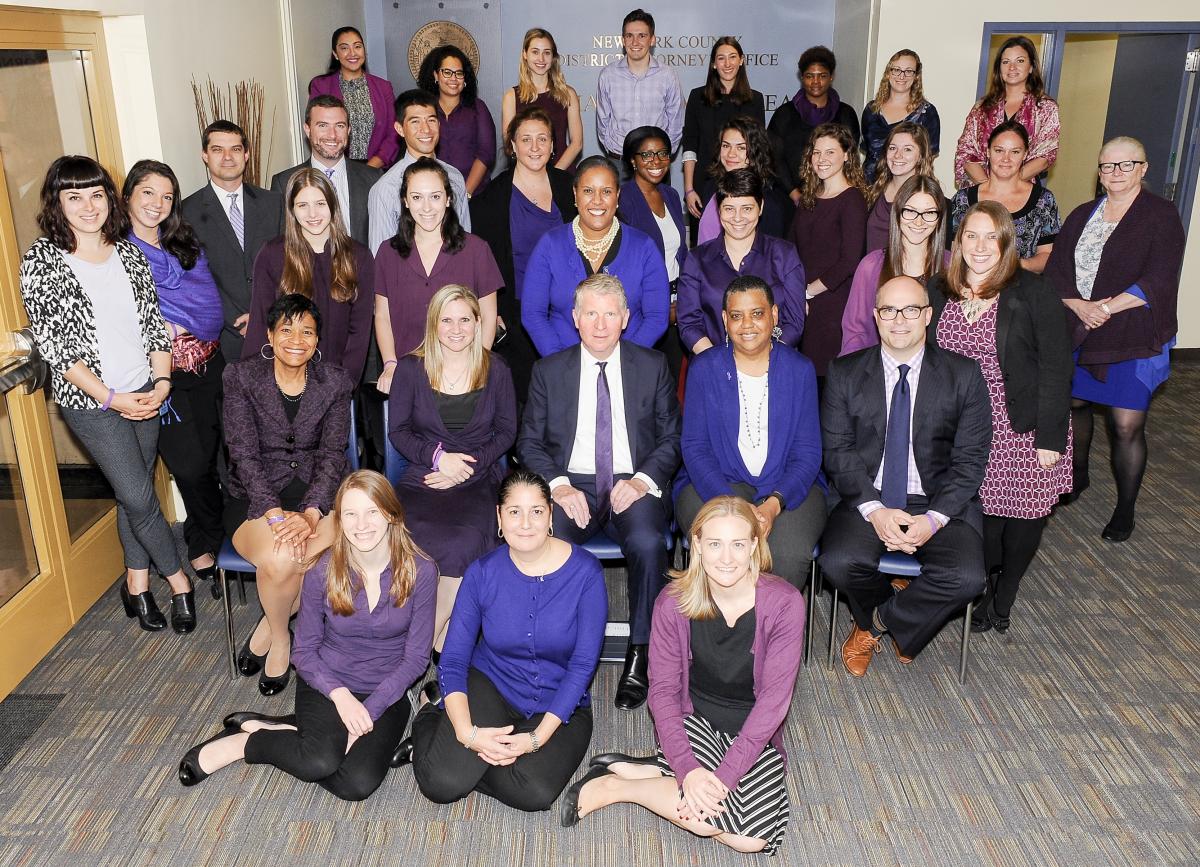 Each October, the Manhattan District Attorney’s Office participates in Domestic Violence Awareness Month by conducting dozens of educational presentations and participating in community-based awareness events across the borough. This October, the District Attorney’s Office’s Domestic Violence Unit, in conjunction with its Community Partnership Unit, conducted 46 presentations at high schools, colleges, senior citizens’ centers, and community board and precinct meetings.

The District Attorney’s Office also joined victim services providers and advocates for numerous marches and events. Each year, the Manhattan District Attorney’s Office and its partners in the Upper Manhattan Domestic Violence Services Collaborative organize a processional and peace vigil called “Shine the Light” in Harlem. This year, the Office also organized the first-annual “Shine the Light” event in Washington Heights with other members of the Washington Heights/Inwood Coalition Against Domestic Violence. Other events included the “Brides’ March,” the sixteenth-annual march in honor of Gladys Ricart and other victims of domestic violence, and “Purple Thursday” on October 20th, when advocates across New York State wore purple in honor of Domestic Violence Awareness Month.

The Manhattan District Attorney’s Office is funding these initiatives through its Criminal Justice Investment Initiative (“CJII”), which it created using criminal forfeiture funds – separate from the Office’s annual budget or taxpayer dollars – obtained through settlements with international banks for violating U.S. sanctions. A strategic plan outlining the fund’s vision, goals, and specific funding priorities for innovative and effective community projects can be found here.