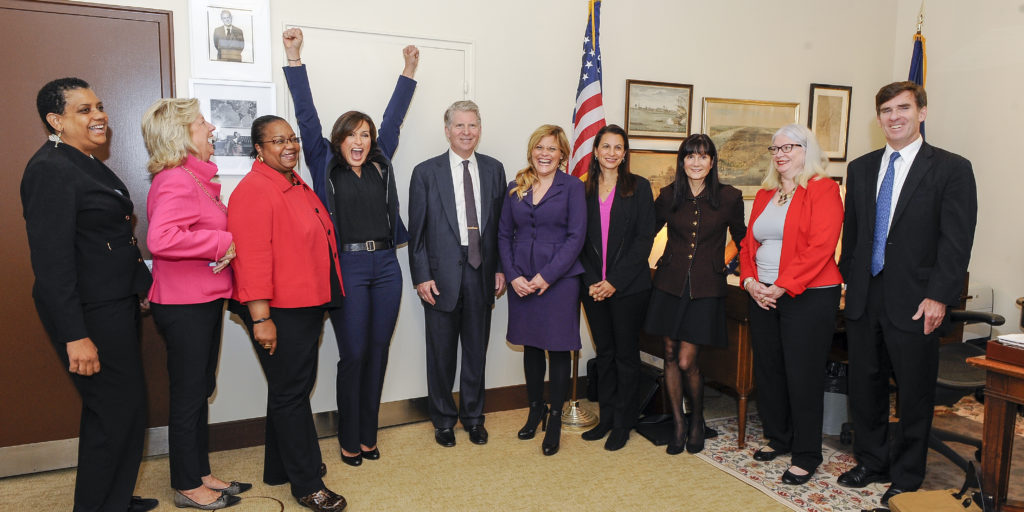 Good afternoon everybody. This is an extraordinary day and we are delighted that you are all here.

Before we begin, I’d just like to acknowledge some folks who have been so important to what we have been working on: Preet Bharara, my colleague in the Southern District of New York, and June, his second in command. Bill Bratton — Bill is a phenomenal partner to all of us. Commissioner Bassett, the New York City Heath Commissioner –Mary, thank you for all that you are doing. The Department of Criminal Justice Services’ Commissioner Mike Green – a former elected DA who is now helping lead the way in criminal justice in New York State. And City Councilman Corey Johnson, again a real friend to survivors of crime.

More than a decade ago, New York became the first major city to eliminate its rape kit backlog, and to make a commitment to ensuring that we would never have one again. Now, today, we are going to help cities, counties, and states – across the country, from coast to coast – do exactly the same.

Dr. Sampson, thank you so much for being our host today. Thank you and your entire staff of the Office of the Chief Medical Examiner for having us here in what is the premier public forensics lab in the United States, if not the world. Thank you for all that you’re doing.

We’ve all heard that bleak statistic: one out of six American women is sexually assaulted in her lifetime. A large and courageous subset of those women report the crime, and undergo a medical forensic examination.

That is because, in the aftermath of a rape, a woman’s body is a crime scene. To preserve this evidence, she can’t take the hot shower she so desperately wants to take. She can’t even change her clothes.

The evidence collected from that crime scene forms what is called a sexual assault evidence kit, or “rape kit.” And I have a rape kit here containing a number of envelopes, where they would store the biological material that is taken from, typically, a woman’s body after a crime. Now, going through this process is to endure a process of poking, prodding, swabbing, scraping, photographing, and drawing of blood and urine – all in the same areas of the body that were just brutally violated, while the victim is still experiencing the trauma of a sexual assault. There are many women in this room today who know exactly what I’m talking about.

So, imagine the shock those victims must feel when they later learn that instead of testing the rape kit, and recovering the DNA of their attacker that could be compared to a nationwide database of convicted offenders, their kit, instead, remains on a shelf, untested for months, years, even decades.

Right now, it’s estimated that there are hundreds of thousands of untested rape kits sitting in police storage facilities nationwide. What stands in the way of testing them is money, and the will to get the job done. I am happy to be here today with Vice President Biden and Attorney General Lynch in this joint effort to end the national backlog once and for all.

Today, the Manhattan DA’s office, my Office, is announcing $38 million in grants going to 32 jurisdictions in 20 states.

At the same time, the federal government is awarding $41 million to empower local jurisdictions to achieve comprehensive rape kit reform in their cities – by counting and testing their kits and funding their investigations and prosecutions.

Altogether, my Office and our federal partners are awarding nearly $80 million for this vitally important justice issue. We estimate that our investment will enable the testing of more than 70,000 rape kits nationwide, many of them key pieces of evidence in unsolved crimes.

Together, these grants represent the single largest contribution toward ending the rape kit backlog that has ever been made.

Together, they secure the civil rights and human dignity of tens of thousands of women –
sometimes men – who have summoned the courage to report a rape, only to have the results of their invasive examinations sit ignored on a shelf, and their rapes unsolved.

And together, these grants represent the best opportunity in a generation to take rapists out of our communities.

The national rape kit backlog represents a tragic and longstanding failure of government at all levels, the impact of which has been borne disproportionately by women.

That the rape kit backlog has existed for so long requires us to ask ourselves whether, despite the best efforts of so many, there are other ways in which we are still failing to protect adequately women who are victims of crimes.

From our experience in New York, we know what happens when you test backlogged rape kits.

I can’t tell you the number of times prosecutors in my Office have called a victim to say, “I hope you are sitting down, because we have some news: we identified the man who raped you five years ago.” Or ten years ago.

Now, the emotional responses run the gamut from survivor to survivor: relief, shock, confusion, and even anger. For some, there is a desire to leave this case alone, and in the past. Many others would like us to move forward. But overwhelmingly, all survivors respond: I can’t believe someone is working on my case. I thought I was the only one who remembered.

Today we are empowering our partners across the country to be able to make those phone calls. To be able to tell survivors of sexual assault that their ordeal was not forgotten, that they were not forgotten, and that we are going to pursue justice. I am saying today, to all the women awaiting justice, you are not forgotten.

With this $80 million commitment, hundreds of women – from Miami to Memphis, and from Pittsburgh to Portland – will be receiving that call.

Not every case will be solved. But every kit will be tested. And every hit will be investigated.

When a city or state tackles its backlog, they see almost instantaneous results. Houston, Texas had more than 6,000 untested rape kits as recently as 2013. Houston’s mayor and City Council said enough is enough. They allocated two million dollars in city funds, got two million dollars in federal grants, and tested their entire backlog in just five months. That five-month process alone yielded 850 matches to the national DNA databank and 29 prosecutions, resulting in prison sentences, in some cases, up to 45 years.

The Houston experience mirrors our own here in New York. Between 2000 and 2003, with the help of OCME, New York City tested 17,000 rape kits, creating a model for other large cities to tackle their own backlogs. From those kits, the Manhattan District Attorney’s Office filed 49 indictments based on DNA hits, obtaining convictions against all of those individuals identified by name.

We’re fortunate to have some of the women responsible for ending New York’s backlog here today: Melissa Mourges – the Chief of our Forensic Sciences/Cold Case Unit, thank you so much, and Martha Bashford – the Chief of our Sex Crimes Unit, which ¬was the first of its kind in the country. They, working with Karen Friedman Agnifilo, our Chief Assistant District Attorney, and Linda Fairstein – author, advocate, and longtime Chief of our Sex Crimes Unit – have made today possible.

Today, I am asking governors of states across the country to examine their laws, and determine whether their rape statutes are protecting victims, or protecting criminals.

There are still too many places in America where rapists get a free pass if they elude law enforcement long enough to beat the statute of limitations clock.

Simply put, we want for these grants to prevent thousands of rapes from ever occurring in the first place. We know a man who rapes, will rape again. So we prevent future rapes by taking these rapists off the streets.

But these grants will do more than just test kits. They will provide something so important, known so well to prosecutors who deal with cold cases: they will provide closure. Closure for the victims, their families. And at the same time, these grants will stop serial rapists, and exonerate the innocent, in cities across the country. It is also my hope that they will restore faith in justice for those who have not received it. In 2010, only 35 percent of rapes or sexual assaults were reported to the police. Two-thirds of men and women who have been raped or sexually assaulted still do not come forward.

The 43 awardees today acknowledge this reality.

We stand beside them today with great optimism. Our justice system can change. Our justice institutions can change. We can refuse to accept that some criminal justice problems are just too big – too ingrained, too controversial, too expensive – to solve.

Thank you very much for letting me address you. Now it’s my great pleasure to introduce Mariska Hargitay, Founder and President of the Joyful Heart Foundation. Now, many of you may know Mariska from her role as an actress, as a heroine detective dealing with sex crimes. But I know Mariska as a case of art imitating life. In her personal life, she is a hero. Through her work at the Joyful Heart Foundation, she has done as much as anybody to put this issue front and center, for all who are responsible for solving it. It is with great thanks and affection, Mariska, that we ask you up here.

Loretta Lynch, our next speaker – the former United States Attorney in the Eastern District and now the Attorney General of the United States – is, I believe, truly leading our nation forward, toward a better, fairer justice system.

She is one of the most remarkable lawyers that I have ever met. She is forceful, she is a strong leader, she gets done what she promises to get done, and I’ve never heard her raise her voice once, or lose her composure.

She has been an invaluable partner to the Manhattan DA’s Office on complex cases ranging from international money laundering to sex trafficking. Just as the Southern District U.S. Attorney, Phreet Baharra, has been to our office. But you don’t have to work alongside Loretta to know that she is one the finest prosecutors in the country, and that she recognizes the unique opportunity prosecutors have at this moment in time – with so much controversy –to shape criminal justice going forward.

So thank you, Loretta, and to our great friend Denise O’Donnell at the Bureau of Justice Assistance. It’s been a pleasure working with you and it’s been an honor to have you back in New York City.