On the first day of Domestic Violence Awareness Month, Manhattan District Attorney Cyrus R. Vance, Jr., announced the expansion of the Office’s Human Trafficking Program into the Human Trafficking Response Unit (HTRU). Housed within the Office’s Special Victims Bureau in the Manhattan Family Justice Center, HTRU investigates and prosecutes sex and labor trafficking cases, and provides support for victims and their families in partnership with advocacy groups. The Unit also works to identify victims in cases that may involve elements of trafficking from hundreds of street arrests that are screened and prosecuted by other areas of the Office, such as the Domestic Violence Unit.

“Sex trafficking operations must be investigated and prosecuted as both a sex crime and a business crime,” said District Attorney Vance. “My newly-expanded Human Trafficking Response Unit not only has the staff and resources necessary to analyze the business side of trafficking organizations – including financial transactions, phone records, online advertisements, and more – but to support our victim-centered approach with a dedicated full-time social worker. Housed in the Manhattan Family Justice Center, we will be able to address the intricacies of these cases, which often come through our doors as domestic violence charges.”

HTRU is among the most robust anti-trafficking units of any prosecutors’ office nationwide with an in-house social worker and financial analyst joining two full-time Assistant District Attorneys (ADAs), 15 cross-designated ADAs, and multiple support staff. HTRU will build upon long-term investigative techniques – including wiretaps and forensic analytics – that make up the backbone of the evidence-based approach used to build these complex cases.

Additionally, HTRU will expand upon the work of the Human Trafficking Program in training prosecutors throughout the District Attorney’s Office to identify signs of human trafficking. That includes screening cases for signs of human trafficking, including charges that often indicate trafficking such as prostitution, unlicensed massage, or domestic violence assaults. Victims rarely self-identify, and are often reluctant to speak with law enforcement. For instance, a victim may refer to the person who assaulted her as her “boyfriend,” when, in reality, that person may be a trafficker. The Manhattan Family Justice Center co-locates the Domestic Violence Unit and Human Trafficking Response Unit to better address these complexities and provide comprehensive services. 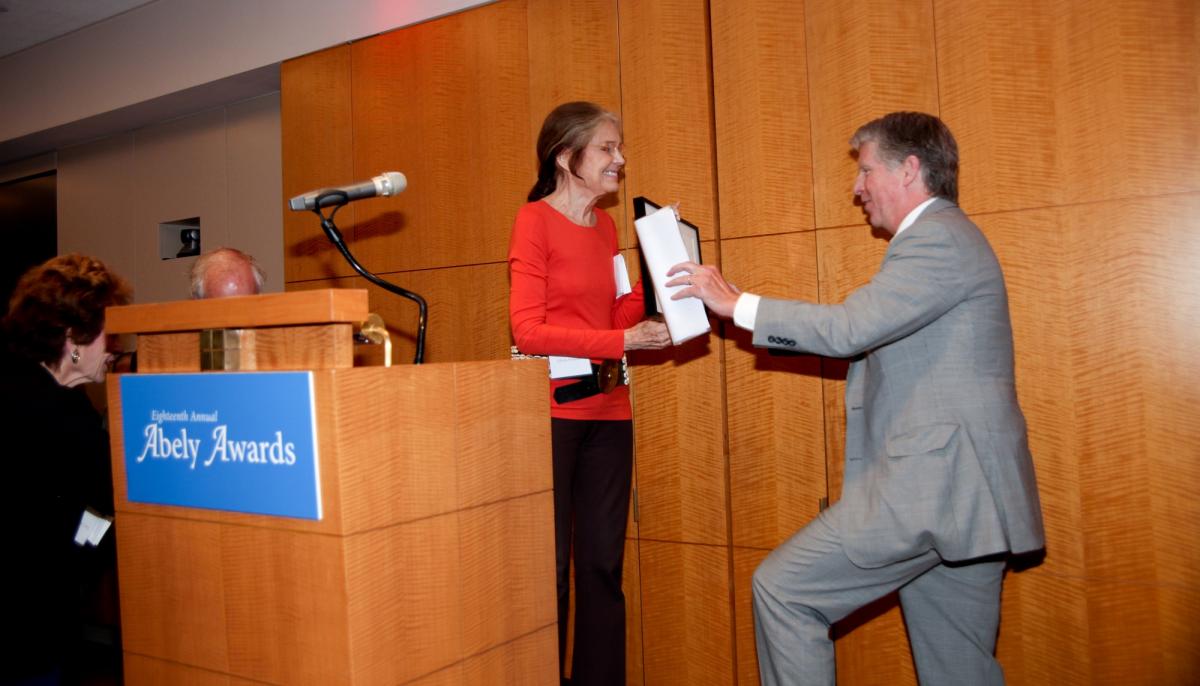 District Attorney Vance accepts the Abely Award for Leading Women and Children to Safety from Gloria Steinem for the Office’s work combatting domestic violence and human trafficking. [Photo courtesy of Sanctuary for Families]

The Manhattan District Attorney’s Office has received a number of recent recognitions for its role in combatting human trafficking. On Monday, District Attorney Vance joined other leaders in the field, including U.S. Senator Amy Klobuchar, U.S. Representative Debbie Wasserman Schultz, Director of Global Diversity for Delta Airlines Letty Ashworth, and Co-Chair of the Arizona Task Force on Human Trafficking Cindy McCain for a panel discussion at the 2014 Concordia Summit.