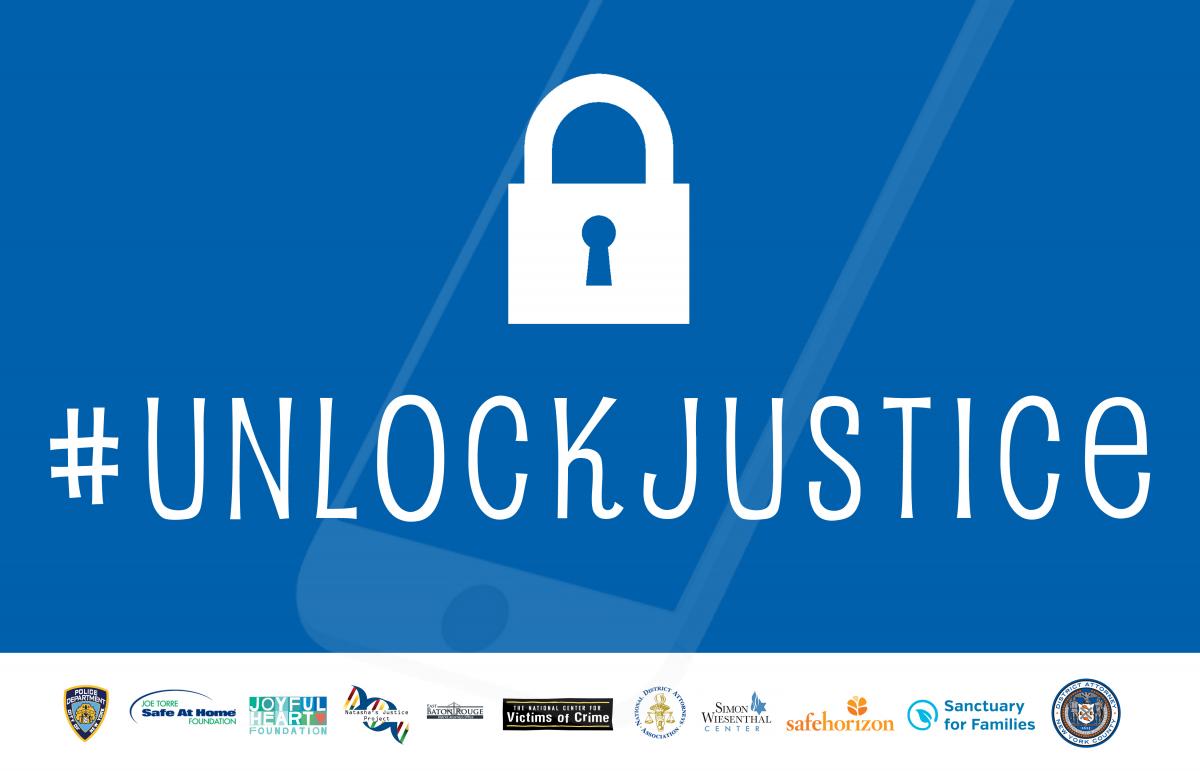 “The debate over encryption is often referred to in terms of privacy and security, with little regard for the impact on crime victims,” said District Attorney Vance. “That limited view ignores the effect of encryption on the investigation and prosecution of crimes ranging from homicide to identity theft to sexual assault. Americans have a right to privacy, but crime victims and surviving family members have rights, too – namely, the right to have cases solved with the strongest evidence available. Juries don’t just expect that – they demand it, and evidence that used to reside in file cabinets, closets, and safes, is today stored on smartphones.

“No consumer product should be warrant-proof, and yet that is the situation Apple and Google have created. Congress should not permit companies to manufacture devices that are impenetrable to judicial search warrants. It should not permit companies to provide criminals with unprecedented, evidence-free zones. Crime victims are entitled to stronger protections than criminals.”

Police Commissioner William J. Bratton said: “The creation of a device impervious to a court-ordered warrant undermines our justice system. This is a crisis in the making and it goes well beyond a singular terrorism case. To establish a safe haven for pedophiles, rapists, and murderers through their mobile device is impacting untold crime victims today – right now. This type of unilateral exclusion from the justice system is not tenable. It must be rectified, immediately.”

East Baton Rouge District Attorney Hillar C. Moore, III, said: “It is absolutely imperative for public safety and protection, that law enforcement retain the ability, through a valid court order, to access communications, photographs and data maintained and operated by criminals and criminal organizations as well as the same information that may be in the custody of witnesses and deceased victims.”

Barbara Mills, mother of homicide victim Brittney Mills and grandmother of 8-day-old homicide victim Brenton Mills, said: “We won’t have any peace or closure until Brittney and Brenton’s killers have been caught. Apple should think about all of the consumers who have their product – including crime victims and survivors. When Apple talks about all of the people it is trying to protect with this encryption, it must not forget about the ones who are suffering.”

Dr. Tia T. Mills, sister of homicide victim Brittney Mills and aunt of Brenton Mills, said: “It hurts us every day to know that the identity of my sister’s killer remains sitting inside a phone in an evidence room. As a family, we call on our elected leaders to pass comprehensive legislation to allow law enforcement access to valuable information. We ask this for victims’ families like ours, who live in pain every day. We owe this fight to my sister and nephew, and for all of our nation’s victims and their family members, as well.”

Natasha’s Justice Project Founder Natasha Alexenko said: “It took many years to find the man that raped and robbed me at gunpoint. My perpetrator was a public safety hazard that was free to roam the country, harming others. Criminals like the man who raped me exploit the system in order to continue their crime sprees. It breaks my heart to know we are handing people who lack a conscience another method to avoid being brought to justice. Criminals are the only individuals we are serving here.”

Ernie Allen, Founding Chairman, former President and CEO of the National Center for Missing & Exploited Children, said: “Children are being harmed by those who hide behind Internet anonymity.  I believe there is a difference between privacy and anonymity, and that absolute Internet anonymity is a prescription for disaster.  We need to find the right balance.”

NDAA Director of Policy and Government Affairs Nelson Bunn said: “Whether it be a homicide, a child exploitation case, or one of human trafficking, there is always a victim involved. Unfortunately, default encryption on smartphones prevents prosecutors from accessing the digital evidence necessary to identify the perpetrator, clear the innocent, and ultimately seek justice for those who have been harmed. Today, we are truly shedding light on why we are all fighting to address this issue: to ensure that victims and their families receive the justice they deserve.”

Joyful Heart Foundation Managing Director Sarah Haacke Byrd said: “Leaders, including policymakers, law enforcement, victim advocates, and survivors, must come together to work with technology companies to ensure that law enforcement has the necessary tools at its disposal to fully investigate crimes and to hold violent offenders accountable. Jointly we must examine how current encryption policies, while attempting to preserve privacy, may be diminishing the ability of law enforcement from doing all that they can to seek justice for victims of sexual assault, domestic violence and child abuse, and provide some level of closure for their families. Together, we can foster a society that does not tolerate these crimes, and does everything possible to ensure public safety and to bring justice and healing to survivors.”

The Simon Wiesenthal Center & the Museum of Tolerance Associate Dean Rabbi Abraham Cooper said: “Like Manhattan DA Vance, the Simon Wiesenthal Center is not opposed to encryption and of course wants to protect the privacy of every law abiding person. But blocking access to critical information related to terrorism, murder, and other serious crimes is unacceptable. The Simon Wiesenthal Center recently released its 2016 Digital Terrorism and Hate Report with Congresswoman Carolyn Maloney (D-NY), which highlighted the use of encryption by terrorists and their supporters. We reiterate our call to all social media companies, including those who offer encryption apps to ensure they can retain the potential to get access to encrypted messages and turn them over to authorities after they have obtained a warrant from a judge for such information. The cooperation of all companies—starting from Apple and Google— is critical to ensuring terrorists aren’t able to cloak their online training, recruitment and command and control of terrorist operations. Further we all have a moral obligation to ensure perpetrators of severe felonies aren’t able to avoid the bar of justice because of encryption technologies.” Joe Torre Safe at Home Foundation Executive Director Yolanda Jimenez said: “We support the District Attorney’s continued effort to bring justice for crime victims. Child abuse, domestic violence, and sex crimes are gravely serious problems in our city and country and the DA’s office has taken the lead on this recent issue, as well as others, which can help victims of these terrible crimes.”

Hon. Judy Harris Kluger, Executive Director of Sanctuary for Families, said: “Every year, thousands of survivors of domestic violence and sex trafficking come to Sanctuary for Families for help. Many have physical scars, the results of beatings, torture and abuse.  Increasingly, abusers are using technology as a weapon to inflict a different kind of harm.  In the process, they leave a trail of evidence that law enforcement must be able to access in order to hold perpetrators accountable for their crimes. I am proud to stand with District Attorney Vance to call on technology companies to comply with legally obtained and judicially sanctioned search warrants. Justice demands it.”

Safe Horizon Vice President of Government Affairs Michael Polenberg, who co-authored a recent op-ed in the New York Daily News about encryption, said: “Today, one in five girls and one in 20 boys are victims of child sexual abuse and last year alone Safe Horizon provided services to more than 5,000 child abuse survivors through our Child Advocacy Centers. We shouldn’t give their abusers the ability to dispose of evidence with impunity. Safe Horizon recognizes and deeply respects the right to privacy, and opposes unwarranted intrusion. However, when police have a valid search warrant and need to get at evidence that’s locked away, they also have a right and duty to protect the public.”

Previously, when law enforcement seized a criminal suspect’s smartphone pursuant to court-authorized warrant, Apple and Google would comply with the judge’s orders by extracting evidence from the device, and sending the evidence to prosecutors. In September 2014, the companies announced that they had reengineered their operating systems with default device encryption, and could no longer access their own products as a result.

Testifying before the U.S. House of Representatives Judiciary Committee on behalf of the National District Attorneys’ Association on March 1st, District Attorney Vance stated: “In the absence of laws that keep pace with technology, we have enabled Apple and other technology companies to upset the balance between privacy and public safety established by centuries of jurisprudence. Technology companies should not be able to dictate who can access key evidence in criminal investigations. No device or company, no matter how popular, should be able to exempt itself from court obligations unilaterally. And they should not be able to write their own laws. I do not believe Americans would want to cede this vast authority to private enterprise. That authority should rest with the people’s elected officials. I urge Congress to enact a national solution.”

To date, there are 230 inaccessible Apple devices that have come into the Manhattan District Attorney’s Office’s in-house Cyber Lab pursuant to judicial search warrants. These devices, running on iOS 8 or higher, cannot be unlocked by Apple, and therefore prosecutors cannot retrieve evidence believed to be critical stored on the devices.

Speaking with MIT Technology Review for its recent feature entitled “What If Apple Is Wrong?,” District Attorney Vance said: “Some people have made the determination that not being able to do the kinds of work we do is an acceptable collateral damage. I’m not sure how the individual would respond if someone close to him or her were the victim of a crime and the case might depend on the ability to access a phone. Easy to say, unless it’s you. We deal with a lot of victims. We talk to the people it’s actually happened to.”

State and local jurisdictions throughout the country are increasingly encountering the same problem:

For more information about encryption’s impact on victims of crime, read the Manhattan District Attorney’s Office Report on Smartphone Encryption and Public Safety.