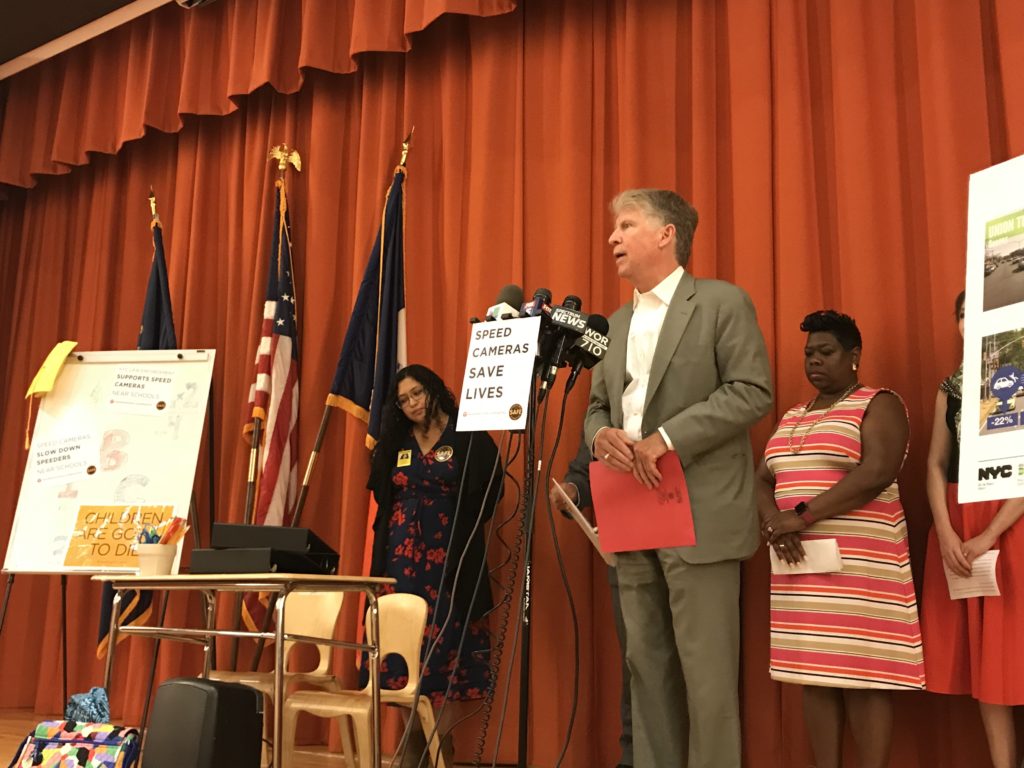 “Speed cameras must be activated before the first school bell rings next month,” said District Attorney Vance. “Speed cameras reduce traffic fatalities through consistent, certain, and fair enforcement of speed limits. They are proven to reduce speeding, which is the main factor in 31 percent of traffic fatalities across the U.S. The Senate must reconvene and renew this program – our children’s lives depend on it.”

Bronx District Attorney Darcel D. Clark said: “Children are our most precious resource, and anything we can do to protect them should be done. We have seen how speed cameras have saved lives, and we hope the legislators will do the right thing and restore this technology near schools across our boroughs to ensure safer streets for students heading back to class.”

Brooklyn District Attorney Eric Gonzalez said, “Speed cameras in school zones should never have been turned off and must be up and running again when the school year begins next month. There is no good argument against this common sense and life-saving program that has a proven record of reducing speeding. It’s time for the Senate to do what’s right for our children and for every New Yorker.”

Queens District Attorney Richard A. Brown said: “Our criminal justice system relies heavily on deterrents and speed cameras would be a substantial step to deter speeding in school zones. We should do everything possible to protect our children.”

NYPD Commissioner James P. O’Neill said: “The NYPD has long worked closely with all of our partners to further the city’s Vision Zero goals. Speed cameras certainly help us save lives. And as we make our way forward, together, we must continue to be creative, innovative, and put into place lifesaving methods that precisely target problem areas, like high-pedestrian traffic areas around schools.”

Marco Conner, Legislative and Legal Director of Transportation Alternatives, said: “Today, New York City’s top law enforcement officers stand united in recognizing the overwhelming benefit of speed safety cameras to our city. Speed safety cameras are the most effective and fair speed enforcement tool available – they save lives and are fair to drivers. Cameras are also a safety benefit for the NYPD and its officers by limiting high-speed vehicle pursuits when issuing speeding-tickets, allowing resources to be spent on other enforcement, and by avoiding police officer exposure to dangerous traffic as they stand next to speeding drivers while issuing tickets. Against these overwhelming benefits to our city stands the New York State Senate Majority which deliberately allowed the few cameras we have to be turned off. Before school starts September 5th, the New York Senate must return to session and allow a vote to renew and expand our life-saving speed camera program.”

Amy Cohen, Founding Member of Families for Safe Streets, said: “We know that speed safety cameras work, and we know they save lives. They’ve reduced speeding violations by 63% on average near schools where they’ve been implemented, and there has been a 55% decrease in fatalities. It is unconscionable that the state senate has let this life-saving program lapse. It needs to be back on before the regular session of school starts on September 5th, when 1.1 million kids will be back walking to and from school. It is too late for my son, Sammy, but it’s not too late for others. If the senate fails to reconvene and pass the bill to extend and expand speed safety cameras, blood will be on their hands.”

New York’s City’s 140-camera pilot program has proven to save lives. The presence of the cameras has reduced speeding by 63 percent and pedestrian injuries by 23 percent in school zones where speed cameras were deployed. The safety camera program also coincided with a major reduction in pedestrian fatalities citywide, at a time when pedestrian deaths have increased nationally.

A recent poll found that speed safety cameras have the support of 88 percent of New Yorkers. Over 300 organizations and institutions from across the five boroughs back the bill to renew and expand the speed camera program, which has 35 co-sponsors in the Senate.