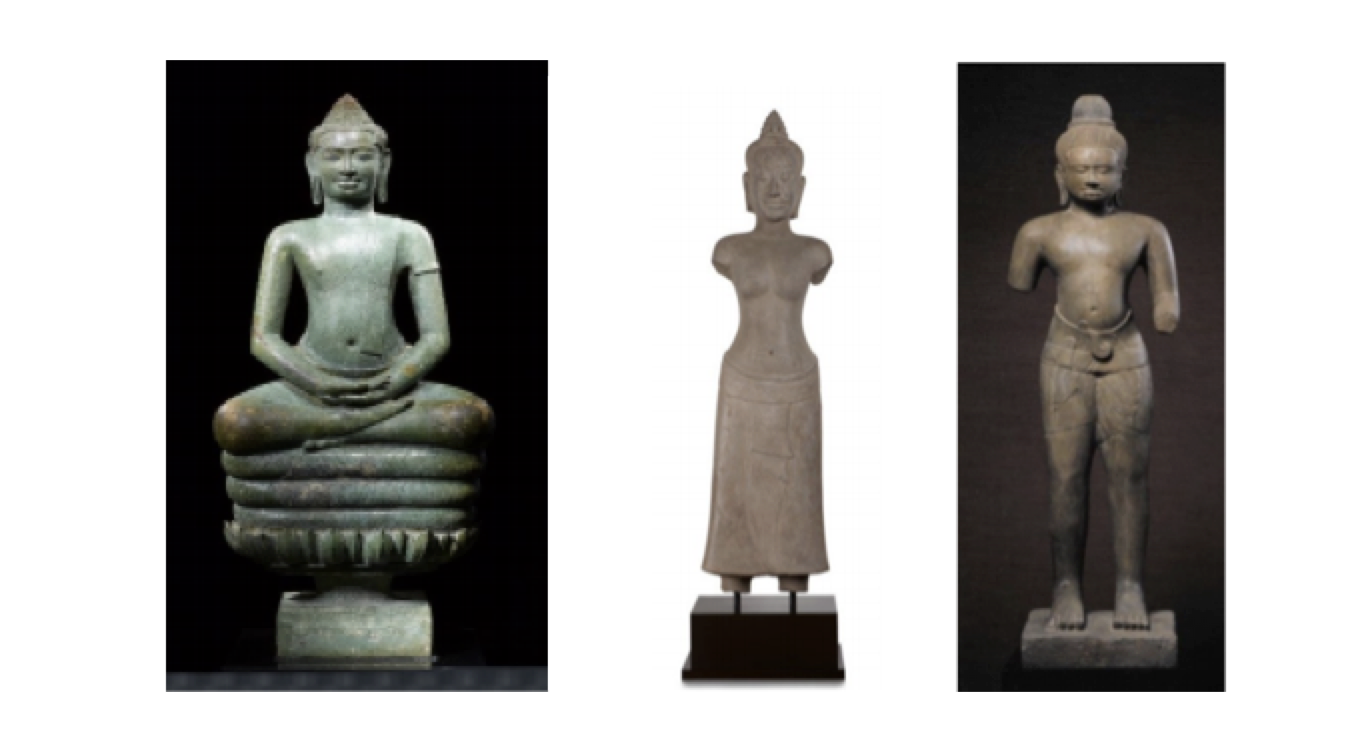 “The repatriation of these 27 stunning relics to the people of Cambodia restores an important link between the nation’s classical Angkor era and its modern customs and beliefs that, for far too long, was disrupted by the greed of stolen antiquities traffickers,” said District Attorney Vance. “Today’s event is a powerful reminder that individuals who plunder and sell culturally significant items are committing crimes not only against a country’s heritage but also its present and future. I want to thank my Office’s Antiquities Trafficking Unit and our partners at Homeland Security Investigations for their relentless efforts that have resulted in nearly 400 treasures being returned to 10 countries over the past year. I look forward to further repatriations in the near future.”

“Homeland Security Investigations is committed to combatting the plundering of cultural heritage and the illicit trafficking of cultural property,” said HSI New York Special Agent in Charge, Peter C. Fitzhugh. “Today, more than two dozen antiquities are being returned to the people of Cambodia; and while the underground market value of these items is in the millions, these pieces are invaluable to the preservation of Cambodian history. HSI New York is proud to have worked this investigation with DANY that led to the ultimate return of these items to their home country, as each artifact is a testimony to the rich cultural heritage of Cambodia.”

“This ceremony is a tribute to the cooperation between our two countries on preventing the looting and trafficking of Khmer artifacts,” said W. Patrick Murphy, U.S. Ambassador to Cambodia. “The United States is proud to play a role in securing the cultural heritage of the Cambodian people.”

“The win-win policy of the Royal Government that has brought peace to Cambodia is a strong foundation for the preservation of the nation’s culture,” said H.E. Dr. Phoeurng Sackona, Minister of Culture and Fine Arts. “The repatriation provides evidence that even during the difficult circumstances of the COVID-19 pandemic, Cambodia remains committed to finding and bringing back our ancestors’ souls that departed their motherland over a number of years, including during a period of war. Cambodia sincerely thanks and praises the Manhattan District Attorney’s Office, HSI and all relevant authorities such as Cambodia’s Ministry of Foreign Affairs and International Cooperation and the US Embassy in Cambodia. The Minister also thanks other individuals and private institutions, including Museums Partner, that have provided support for this important accomplishment, including the transportation of these invaluable statues back to Cambodia for the benefit of the Cambodian people and the world.”

The three non-Kapoor pieces being returned to Cambodia resulted from the investigation of WIENER, who was charged in December 2016 with Criminal Possession of Stolen Property in the First Degree, Criminal Possession of Stolen Property in the Second Degree, and Conspiracy in the Fourth Degree. Between at least 1999 and 2016, WIENER allegedly utilized her New York-based business, Nancy Wiener Gallery, to buy, smuggle, launder, and sell millions of dollars’ worth of antiquities stolen from Afghanistan, Cambodia, China, India, Pakistan, and Thailand.

The items repatriated to Cambodia today included several Angkorian Buddhist statues and Hindu statues such as a bronze meditating Buddha on a Naga, a statue of Shiva, and a Buddhist sandstone sculpture of Prajnaparamita.

As of today’s ceremony, the D.A.’s Office has returned 390 antiquities to 10 nations since August 2020, including, in recent months, three objects to Nepal, a pair of statutes to Sri Lanka, 13 artifacts to Thailand, and 33 relics to Afghanistan. Earlier this week, the D.A.’s Office repatriated 12 treasures to China in a ceremony at the Consulate General of China in New York.

To date, the D.A.’s first-of-its-kind Antiquities Trafficking Unit has recovered several thousand stolen antiquities collectively valued at more than $175 million. Many hundreds of these priceless artifacts have been returned to their rightful owners and repatriated to their countries of origin, including a total of 390 objects to 10 nations since August 2020. Many hundreds more are ready to be repatriated as soon as the relevant countries are able to receive them amid the pandemic. But more than a thousand must be held awaiting criminal proceedings against the traffickers. The items already returned include a pair of statues of Buddha to Sri Lanka; an Egyptian limestone stele dating back to664 B.C.E, 45 antiquities dating back to the 2ndCentury to Pakistan; a gold coffin stolen from Egypt in the aftermath of the Egyptian Revolution in 2011; three marble Lebanese statues; a Roman mosaic excavated from the Ships of Nemi; an Etruscan relic stolen from the site of a historic necropolis known as the “City of the Dead”; a marble sarcophagus fragment; a Buddhist sculpture stolen from an archaeological dig site; a pair of 12th century Indian statues; a collection of 8th Century B.C.E. bronze statues; and a set of ancient Greek coins, among others.

District Attorney Vance thanked HSI New York and Minister Sackona for their assistance with the matter.