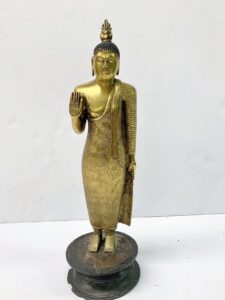 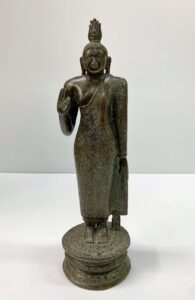 Manhattan District Attorney Cy Vance, Jr. today announced the return of a pair of antique statues of Buddha valued at approximately $66,000 to the people of Sri Lanka. The pair of statues were seized pursuant to the D.A.’s Office’s investigation of SUBHASH KAPOOR. The statutes date back to the 18th Century C.E. and measure approximately 14 inches in height. The antiquities were returned during a repatriation ceremony attended by Permanent Representative or Sri Lanka to the UN, Ambassador Mohan Pieris and U.S. Homeland Security Investigations (“HSI”) Deputy Special Agent-in-Charge Erik Rosenblatt.

“This remarkable pair was part of the collection of thousands of looted and stolen antiquities that my Office’s Antiquities Trafficking Unit and our partners at Homeland Security Investigations seized from Subhash Kapoor,” said District Attorney Vance. “Mr. Kapoor and his co-conspirators allegedly trafficked millions of dollars’ worth of ancient relics with abandon for many years. We have filed charges and extradition paperwork to ensure Mr. Kapoor will face justice for these crimes of culture. While we await his return to Manhattan, we are incredibly pleased to be able to repatriate these beautiful pieces to their rightful owners – the people of Sri Lanka.”

“Preserving the world’s cultural heritage is and will continue to be a priority for Homeland Security Investigations.  The pieces repatriated today have a significant monetary value, but these pieces are invaluable to the people of Sri Lanka,” said Homeland Security Investigations New York Special Agent-in-Charge Peter C. Fitzhugh. “It is an honor for HSI and our law enforcement partners to collaborate with our fellow nations to return artifacts to their rightful home.”

“We are grateful for the tireless work of the Manhattan District Attorney Cyrus Vance Jr, his staff, the members of the Antiquities Trafficking Unit led by Assistant District Attorney Matthew Bogdanos and officers of the Homeland Security Investigations for recovering and restoring for the first time in the US, two historically valuable artifacts of the Lord Buddha dating to the 18th Century, as part of Sri Lanka’s rich religious and cultural heritage,” said Ambassador Mohan Pieris.

For many years, the Manhattan D.A.’s Antiquities Trafficking Unit, along with law enforcement partners at HSI, has been investigating KAPOOR and his co-conspirators for the illegal looting, exportation, and sale of ancient art from Sri Lanka, India, Pakistan, Afghanistan, Cambodia, Thailand, Nepal, Indonesia, and other nations. KAPOOR and his co-defendants generally smuggled looted antiquities into Manhattan and sold the pieces through KAPOOR’S Madison Avenue-based gallery, Art of the Past. From 2011 to 2020, the D.A.’s Office and HSI recovered more than 2,500 items trafficked by KAPOOR and his network. The total value of the pieces recovered exceeds $143 million.

The D.A.’s Office first issued an arrest warrant for KAPOOR in 2012. In July 2019, a complaint and series of arrest warrants for KAPOOR and seven co-defendants were filed and an indictment was filed in October 2019. In July 2020, the D.A’s Office filed extradition paperwork for KAPOOR, who is currently in prison in India pending the completion of his ongoing trial in Tamil Nadu.

With the exception of RICHARD SALMON, all of the co-defendants named on KAPOOR’S complaint are still at large. In October 2020, SALMON plead guilty to Conspiracy in the Fifth Degree and Scheme to Defraud in The Second Degree and was sentenced to a conditional discharge and community service.

Prior to today’s ceremony, the D.A.’s Office has returned four other pieces to India that were seized pursuant to the KAPOOR investigation.

To date, the D.A.’s first-of-its-kind Antiquities Trafficking Unit has recovered several thousand stolen antiquities collectively valued at more than $175 million.  Many hundreds of these priceless artifacts have been returned to their rightful owners and repatriated to their countries of origin. Many hundreds more are ready to be repatriated as soon as the relevant countries are able to receive them amid the pandemic. But more than a thousand must be held awaiting criminal proceedings against the traffickers. The items already returned include an Egyptian limestone stele dating back to 664 B.C.E, 45 antiquities dating back to the 2nd Century to Pakistan; a gold coffin stolen from Egypt in the aftermath of the Egyptian Revolution in 2011; three marble Lebanese statues; a Roman mosaic excavated from the Ships of Nemi; an Etruscan relic stolen from the site of a historic necropolis known as the “City of the Dead”; a marble sarcophagus fragment; a Buddhist sculpture stolen from an archaeological dig site; a pair of 12th century Indian statues; a collection of 8th Century B.C.E. bronze statues; and a set of ancient Greek coins, among others.

District Attorney Vance thanked HSI New York and Sri Lanka’s Permanent Mission to the United Nations for their assistance with the matter.