Approximately $450,000 in Bribes Made in Connection with More Than 100 Residential and Commercial Properties in Manhattan, Brooklyn, and Queens

The nearly two-year-long investigation, initiated by DOI and the Manhattan District Attorney’s Office’s Rackets Bureau in 2013, began as an inquiry into the bribery of a single DOB inspector. DOI, the District Attorney’s Office, and the NYPD utilized court-authorized wiretapping; analysis of DOB, HPD, financial, and phone records; and surveillance over the course of the investigation. The investigation revealed evidence of approximately $450,000 worth of alleged bribes in numerous, distinct schemes between 16 DOB and HPD employees and 22 property managers and owners, six expeditors, two contractors, and one engineer. Indictments filed in Kings County Supreme Court will be handled by Manhattan prosecutors, pursuant to a cross-designation authorized by Brooklyn District Attorney Ken Thompson.

“Bribery schemes compromised two important City agencies and fair competition in our robust housing and real estate development markets,” said District Attorney Vance. “Today’s cases demonstrate that the same surging demand that drives the pace of development can inspire the taking of shortcuts, and the taking of bribes. Working proactively with our partners at DOI and the NYPD, we are rooting out corruption at all levels, and bringing those who abuse their positions of power to justice.”

“Our investigation revealed a widespread network of corruption in the construction industry and among the City workers charged with keeping that industry safe,” said DOI Commissioner Mark G. Peters. “We found that these 16 City employees, including several senior supervisory staff, took bribes to clear code violations including some that presented real safety threats. Today’s arrests shows that the City and law enforcement have zero tolerance for criminal conduct that undermines the City’s mandate to protect its citizens.”

“Today’s arrests and indictments show that we have zero tolerance for corruption and fraud within our city agencies,” said Police Commissioner William J. Bratton. “These building employees held important and trusted positions, but they chose to allegedly circumvent the system and violate the public’s trust to gain a profit. I want to sincerely thank the NYPD’s Organized Crime Investigation Division, the NYC Department of Investigation and the prosecutors in the Manhattan District Attorney’s Office for aggressively pursuing this case and holding these individuals responsible for their criminal actions.”

“I would like to commend DA Vance and his staff for conducting an investigation to expose this extensive and unacceptable betrayal of the public trust by city government employees,” said Brooklyn District Attorney Ken Thompson. “My office will continue to work closely with the Manhattan DA’s Office to ensure that justice is done in this case, and I pledge to continue to work closely with our law enforcement partners to root out public corruption, including corruption caused by those who try to use their money to gain an unfair advantage.” 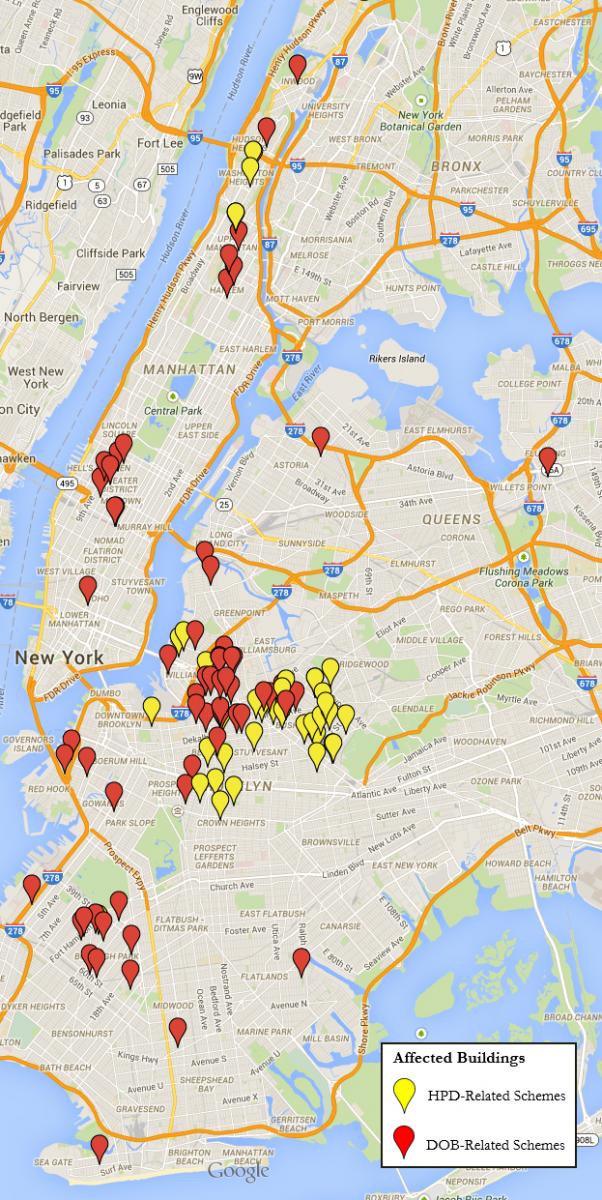 According to court documents and statements made on the record in court, over the course of several years, 11 DOB employees, ranging in roles from clerks to chiefs, allegedly accepted bribes in Manhattan and Brooklyn in excess of $400,000. These DOB employees are charged with accepting monetary payments ranging from $200 to $3,000, and other benefits from property managers and expeditors (filing representatives registered by the DOB to act as middlemen between the Department and contractors, homeowners, and managing agents). In exchange, the DOB employees allegedly cleared complaints, Stop Work Orders, and violations, and expedited DOB inspections, enabling expeditors to bypass proper channels and deal directly with high-level DOB employees.

In exchange, WEISZER is alleged to have paid the Chief of Development and his wife, JANELLE DALY, bribes in the form of approximately $200,000 for home mortgage payments, a Nissan Rogue SUV, a GMC Terrain SUV, and a Royal Caribbean cruise, as well as cash for airline tickets, home renovations, and other personal expenses. WEISZER is similarly alleged to have paid Inspector MUJKO more than $70,000 in cash bribes for signing-off on WEISZER’s necessary inspections, in addition to allegedly paying $2,000 to $3,000 at a time in cash to clerks ELAINE CUTCHIN and TAMARAH ALLEN, who allowed him to cut past people waiting in line at DOB’s Brooklyn office without showing the required credentials.

After he stopped working with the Chief of Development, WEISZER is alleged to have developed a new scheme in June 2014 involving VERONICA VELEZ, a client manager at the New York City Department of Small Business Services (“SBS”). WEISZER is charged with bribing VELEZ to route MUJKO to his properties, including those that fell outside of SBS’s mission, like residential buildings and synagogues, by promising to pay rent on her apartment. In turn, WEISZER then allegedly bribed MUJKO to perform favorable inspections on his properties.

Further, according to court documents and statements made on the record in court, between May and August 2014, defendants LUIS SOTO, a Brooklyn HPD Housing Inspector, and OLIVER ORTIZ, a Manhattan HPD Associate Inspector in a supervisory role, dismissed HPD violations and falsified HPD records in exchange for bribes from nine property owners, managers, and an expeditor. In total, SOTO and ORTIZ are alleged to have fraudulently dismissed 778 HPD violations from 24 properties in Brooklyn in exchange for more than $41,000 in bribes.

SOTO is alleged to have negotiated and accepted cash bribes ranging from $1,000 to $2,500 per property in exchange for removing violations on the interested parties’ properties. As part of their alleged scheme, ORTIZ is charged with creating false entries in HPD’s internal computer system, the Borough Office Support System (“BOSS”), in order to fraudulently document inspections that never occurred, and approve the final dismissal of violations, even though none of the related properties were actually inspected by SOTO during the course of this scheme.

In one such scheme, between June 2014 and August 2014, defendant ABRAHAM MERTZ, a Brooklyn property manager, is charged with paying SOTO more than $20,000 in bribes to remove 476 violations at 13 separate properties in the Bushwick, Williamsburg, and Bedford-Stuyvesant neighborhoods of Brooklyn. SOTO then allegedly paid ORTIZ to falsify records in HPD’s BOSS system. The dismissed violations include:

In a similar scheme, between July 18, 2014, and August 8, 2014, ROBERT CADOCH, another Brooklyn property manager, is charged with paying SOTO $6,000 in bribes to remove 96 violations at three separate properties in Bedford-Stuyvesant. ORTIZ was in turn paid by SOTO to falsify records in HPD’s BOSS system. The dismissed violations include:

ORTIZ and SOTO are charged with accepting more than $41,000 in bribes to remove hundreds of other similar violations at dozens of properties owned or managed by SHULEM SCHWARTZ, JOEL WALDMAN, MORDECHAI KATZ, ISSAC ROSENBERG, ROBERT CADOCH, MOSES LEFKOWITZ, SANTOS MUNIZ, and ALEKSANDER ZIVKOVIC. At least one of these properties received a violation for lead-based paint.

District Attorney Vance also thanked the Brooklyn District Attorney’s Office, U.S. Immigration and Customs Enforcement’s (ICE), and the Office of the Special Narcotics Prosecutor, as well as the New Jersey and Pennsylvania State Police, for their assistance.

[1] The charges contained in the indictments are merely allegations, and the defendants are presumed innocent unless and until proven guilty. All factual recitations are derived from documents filed in court and statements made on the record in court.