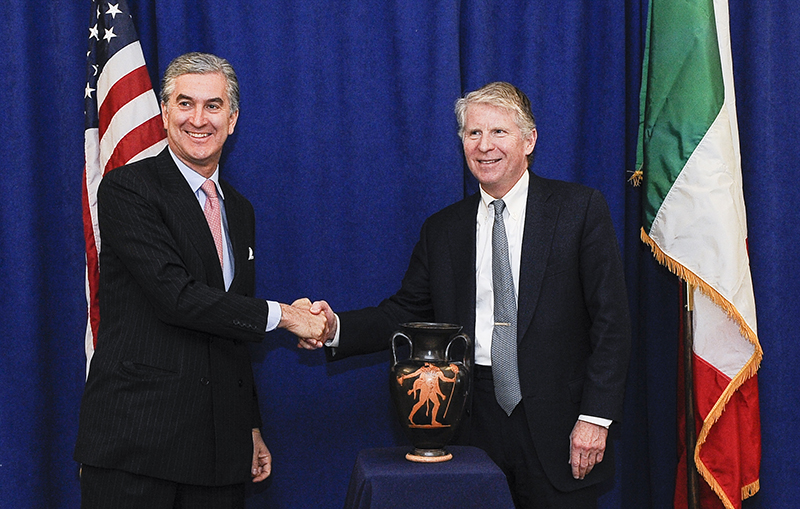 “When looters overrun historic sites, mine sacred spaces for prized relics, and peddle stolen property for top dollar, they do so with the implicit endorsement of all those who knowingly trade in stolen antiquities,” said District Attorney Vance. “Placing profit above provenance is unacceptable, particularly on the part of those with the means and expertise to recognize signs of trafficking. I encourage individuals, gallery owners, art collectors, and academics to report potential thefts to my Office and our partners in law enforcement.”

Min. Plen. Francesco Genuardi, Consul General of Italy in New York, said: “On behalf of the Italian Republic, the Consulate General wishes to extend its heartfelt thanks and congratulations to the District Attorney of Manhattan, Cyrus R. Vance, Jr., and his office, as well as to Ms. Debra Parker, Deputy Special Agent-in-Charge of Homeland Security Investigations in New York, for their contribution to the achievement of another significant result in the fight against international smuggling of antique artifacts.

“Today, a marvelous Etruscan vessel, dated around 470 B.C. and stolen from Italy in the nineties, finally returns to Italy and I am very proud to accept it as part of our cultural and artistic heritage.

“As agreed upon with the Italian Ministry of Cultural Heritage and Tourism, the Etruscan vessel will be at first exhibited at the Consulate General of Italy in New York where the Italian and Italian-American community of New York could appreciate its beauty during our many public events. In a few months, it will be returned to Italy and permanently displayed in one of the museums belonging to the ‘Polo Museale del Lazio’ with a special mention of the decisive contribution of the Manhattan District Attorney’s Office for its repatriation.

“The artistic expression of every country is part of our global human heritage. Art, culture, and tradition should be defended from illegal trafficking and preserved at international level. Illegal smuggling of artwork affects not only a country, which is deprived of its own treasures, but all of us, since artworks represent our values, our history, our tradition and our culture. Protecting those treasures is a priority for every country and it represents a way to keep them alive throughout the years.

“This repatriation ceremony represents a tremendous result in the framework of the significant strengthening of the collaboration between Italy and the United States, led on the Italian side by the Italian Embassy in D.C. It is indeed not the first time that American and Italian authorities are involved in this kind of partnership aimed at recovering of stolen artworks.

“The Consulate General is therefore very thankful to the District Attorney’s office and Homeland Security Investigations office for recovering this important vessel and for their strong commitment towards law enforcement and international cooperation.”

Angel M. Melendez, Special Agent-in-Charge of HSI New York, said: “The investigative efforts set forth by the Manhattan District Attorney’s Office, the Consul General of Italy in New York, and our Cultural Property, Art and Antiquities unit unraveled the mystery of this relic stolen from the historic site of the ancient Necropolis more than two decades ago. The return of this vase is another instance of solid international partnerships that result in the identification and recovery of historic, stolen works of art.”

In February, the Manhattan District Attorney’s Office seized the vessel from a gallery in Midtown Manhattan pursuant to a search warrant and as part of an ongoing joint investigation with partners in international law enforcement. 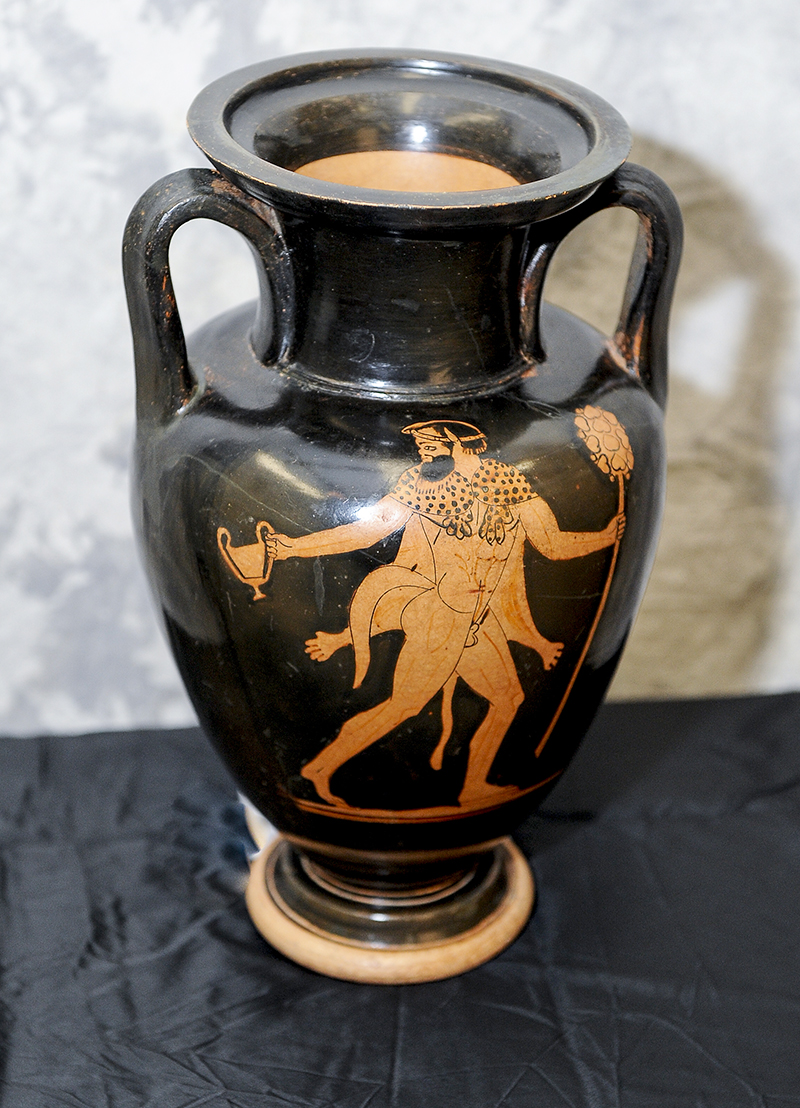 The dual-handled vessel dates back to approximately 470 B.C. and was stolen in the mid-1990s from Cerveteri, a present-day municipality located to the north of Rome, Italy, and the historic site of an ancient Etruscan necropolis. The value of the vessel, which depicts a nude satyr and draped youth, is estimated at more than $250,000. Once presented with evidence of theft, the item was forfeited willingly by the Manhattan-based art gallery where it was advertised and displayed.

Also in February, the Manhattan District Attorney’s Office returned an ancient marble sarcophagus fragment to the Hellenic Republic after the recovering the relic from the same gallery in Midtown Manhattan, where it was displayed as a centerpiece. The item, which was stolen from Greece in the early 1990s, was smuggled abroad and trafficked through Europe before landing in New York.

Over the past few years, the Manhattan District Attorney’s Office has recovered and repatriated numerous items forfeited as part of criminal investigations and prosecutions:

Assistant District Attorney Matthew Bogdanos, Senior Trial Counsel, handled the recovery of the Etruscan amphora. The recovery was made possible by the efforts of Dr. Christos Tsirogiannis, Affiliate Researcher at the Scottish Centre of Crime and Justice Research, University of Glasgow, and lecturer for the Association for Research into Crimes Against Art (“ARCA”) in Italy.

District Attorney Vance also thanked HSI New York and the Consulate General of Italy in New York for their assistance with the matter.