We’re holding people accountable for carrying guns. Gun violence spiked across the country during the pandemic, including here in Manhattan, and we’re meeting the moment by zeroing in on drivers of violence with our gun prosecutions. We also meet daily with local, state, and federal law enforcement agencies through the Gun Violence Strategic Partnership to share information and focus resources on the most prolific drivers of violence. 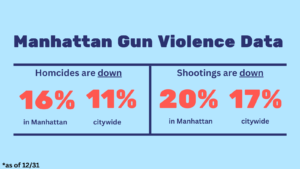 Almost every gun used in violent crime in Manhattan was trafficked here illegally from a state with weak gun laws. D.A. Bragg increased resources for gun trafficking enforcement, working closely with the NYPD and our federal partners. We’ll continue to target those who flood our neighborhoods with deadline weapons.

Tackling the Proliferation of Ghost Guns

D.A. Bragg is leading the fight against the new plague of “ghost guns,” firearms that are assembled from untraceable parts that can be ordered online. In partnership with the NYPD, we are increasing enforcement efforts, using wiretaps and undercover operations to make our city safe.

Our ultimate goal is to prevent gun violence from happening in the first place by supporting and investing in community-based organizations doing the boots-on-the-ground work. Our Community Partnerships Unit also offers Gun Violence Prevention presentations to reduce gun violence and strengthen community bonds.

SPOTLIGHT: Discouraging young people from carrying guns is key to tackling gun violence. D.A. Bragg’s Gun Violence Prevention Community Initiative provided funding to 10 community-based organizations to incentivize youth and young adults who are at high risk of committing or falling victim to gun violence to participate in meaningful programming. Funding was awarded to organizations that employed a credible messenger model or similar approach and had a demonstrated track record of engaging young people at high risk. 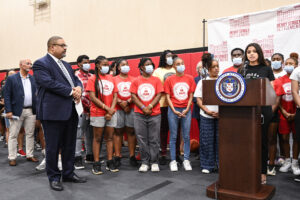 New York State received a setback in getting guns off our streets when, in New York State Rifle & Pistol Association, Inc. v. Bruen, the United States Supreme Court overturned an important aspect of our gun licensing law which had been on the books for over 100 years. In response to this decision, we worked closely with the New York State legislature to draft a new gun licensing law, which took effect September 1, 2022. D.A. Bragg has taken the lead in educating New Yorkers about what the decision and the new law means for them, and crucially, fighting to uphold our existing gun laws in our courts.

In early 2023, we filed two amicus briefs in support of essential gun violence prevention laws. The first, NSSF v James, was filed in support of Senator Zellnor Myrie’s legislation to hold members of the gun industry accountable for business practices that drive the trafficking of illegal guns. The second, Antonyuk v Nigrell – which was joined by the Bronx, Brooklyn, and Queens District Attorneys – was submitted in ongoing litigation over the Concealed Carry Improvement Act. “We prosecute gun cases in court every day, and litigation is another important avenue we are utilizing to protect our state’s tough gun laws,” said D.A. Bragg.