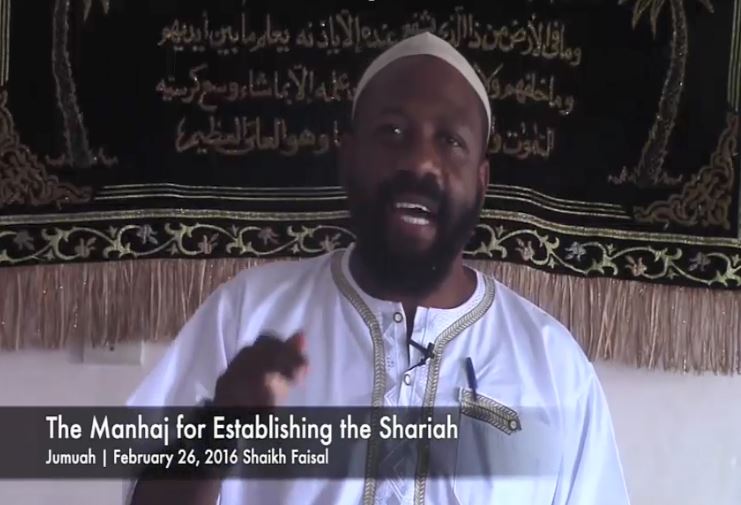 Manhattan District Attorney Cyrus R. Vance, Jr., and New York City Police Commissioner James O’Neill today announced the indictment of TREVOR WILLIAM FORREST, a/k/a “SHAIKH ABDULLAH FAISAL,” a/k/a “SHAIKH FAISAL,” 53, for using his public profile and personal network to recruit and provide support to those seeking to commit acts of violence and terrorism against others. The defendant is charged in a New York State Supreme Court indictment with Soliciting or Providing Support for an Act of Terrorism in the First Degree as a Crime of Terrorism and other charges.[1]

The indictment follows a yearlong investigation by the NYPD Intelligence Bureau and the Manhattan District Attorney’s Office’s Counter Terrorism Program, which was created in June 2015 to identify and pursue investigative leads related to homegrown terror plots, extremist activities, and terror-financing.

“Shaikh Faisal has dedicated his life to terror recruitment,” said District Attorney Vance. “Through his lectures, website, and videos, he incites untold numbers of people around the world to take up the cause of jihad. As is alleged in this case, he provided material support to the Islamic State by facilitating the passage of a self-described ISIS sympathizer from New York to Syria. A charismatic leader, the defendant’s rhetoric has been cited by several convicted or suspected terrorists in New York, London, and beyond. As charged in today’s indictment, the defendant also served as the fulcrum of a recruitment effort that encouraged individuals to carry out acts of terrorism in the name of the Islamic State and connected them with other radical supporters who were willing—or already in the process—of doing the same in countries around the world.”

Police Commissioner James P. O’Neill said: “Shaikh Faisal has used his influence and direction to groom and inspire terrorists who have bombed trains, attempted to blow up airliners, and attack Americans here and abroad. His arrest for his efforts to recruit people for ISIS, a terrorist group that has plotted attacks against New York City, should bring an abrupt end to his global outreach in support of terror groups such as al-Qaida and ISIS.”

According to the indictment and documents filed in court, beginning in December 2016, FAISAL and an undercover NYPD officer based in New York began communicating remotely while the defendant was living in St. James, Jamaica.

Since 2014, FAISAL, who was previously convicted in the U.K. of crimes related to inciting murder and using racially charged, hateful rhetoric in furtherance of terrorist ideologies, has publicly supported a terrorist organization known as the Islamic State, a/k/a “ISIS” or “ISIL”, and called for the establishment of an Islamic caliphate through violent acts encouraged by the defendant’s online lectures and militant propaganda.

During their conversations, which occurred over email, text messages, and video chats, FAISAL encouraged the undercover officer to view his lectures online and began sending this person propagandist reports from an official Islamic State news outlet. After their initial exchanges, the defendant offered to help the undercover officer leave the U.S. and travel to the Middle East to support foreign fighters abroad. FAISAL also offered to connect this individual with contacts, cautioning the undercover officer to be circumspect about explicit references to the plan, employ coded language, and use an encrypted chat tool while communicating with FAISAL and his associates.

The Manhattan District Attorney’s Office has successfully prosecuted terrorists under New York State’s anti-terror laws, which were enacted following the attacks on September 11, 2001.

In March 2014, Jose Pimentel was sentenced to 16 years in state prison for constructing improvised explosive devices to detonate in Manhattan. Pimentel, who viewed FAISAL’s videos, participated in the defendant’s online chat forum, and cited the defendant as one of his primary inspirations, was convicted of Criminal Possession of a Weapon in the First Degree as a Crime of Terrorism.