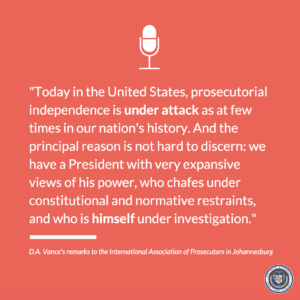 Today in the United States, prosecutorial independence is under attack as at few times in our nation’s history. And the principal reason is not hard to discern: we have a President with very expansive views of his power, who chafes under constitutional and normative restraints, and who is himself under investigation.

Even before President Trump won his party’s nomination, he envisioned harnessing prosecution to his political agenda. Mere mention of his opponent’s name at his political rallies evoked chants of “lock her up!” At a Presidential debate, candidate Donald Trump told Hillary Clinton point-blank that, if he were President, she would be in jail.

Indeed, early in the Trump administration, the President instructed his Attorney General to commence an investigation into the activities of his former opponent – an instruction which he continues to reiterate via Twitter almost every day.

Later, after a Special Counsel was appointed to investigate allegations of Russian meddling in the Presidential election and possible links to the Trump campaign, the President branded the investigation a “witch hunt” and by tweet urged his Attorney General to fire the Special Counsel – another now-daily Presidental refrain.

But none of that has happened. Hillary Clinton is not in jail, the Justice Department has announced no new investigation of her activities, and the Special Counsel continues a vigorous investigation and prosecutions.

Why? What protects the American prosecutor from interference?

So first, a few words of history.

When America declared its independence from Great Britain, it listed among its grievances against the British monarch that the king had “made Judges dependent on his Will alone for the tenure of their offices…” The principle of judicial independence was so crucial that it was among the grievances that led the colonists to war. And when the new American nation adopted its Constitution, it made the judiciary its own separate, coequal branch of government, defined in its own Article of the Constitution, which provided that federal judges were to be appointed for life.

Judges have taken that promise of independence seriously.  When Franklin Roosevelt became President, during the Great Depression, five of those very independent Supreme Court Justices defeated him at every turn, ruling that some of the New Deal economic legislation he had signed into law was unconstitutional. The President, in turn, proposed court packing legislation that would in essence have allowed him to expand the number of justices on the Court and appoint his own majority.

Congress refused to consider the legislation. President Roosevelt died in his fourth term in office, but the result of his attempting to enlarge his power eventually led to the Constitution being amended, not to restrain the Judiciary, but to limit the length of time a President could serve in office to two terms.

And under the heading of everything old becomes new again, coincidentally, just this summer, we learned that the ruling party of Poland has attempted to expand its influence on the judiciary by lowering the retirement age of justices from 70 to 65, which would force out up to 27 of the current 72 Supreme Court justices, and allow that many new appointments by the government.

Judicial independence has been a fundamental principle of American government from its inception.

That was not the case for prosecutorial independence. Prosecutors are not explicitly mentioned in our Declaration of Independence or in our Constitution. And it is not hard to understand why. Prosecution was seen as an executive function, and so independence from the executive branch of government was by no means an obvious principle.

During the 1972 presidential campaign, burglars broke into the headquarters of the Democratic National Committee at the Watergate Hotel in Washington. Crusading journalists, a determined judge, and a special committee of the U.S. Senate uncovered clues that the burglary had been organized by President Richard Nixon’s re-election campaign. A special prosecutor, Archibald Cox, was appointed. He subpoenaed tape recordings President Nixon had secretly made of conversations in his White House Office.

Finally, the third in command at the Department of Justice obeyed the President’s order and fired the Special Prosecutor. The Saturday Night Massacre was complete, but it did Nixon no good. The American Congress and the American people were so outraged by Nixon’s actions – by his interference with prosecutorial independence –

that a new Special Prosecutor was appointed, the taped conversations were turned over, articles of impeachment were drafted, and within a year, Nixon had resigned. All of this was set into motion by the courageous acts – or refusals to act – of two principled prosecutors who refused to carry out orders that they knew were corrupt.

Today we again have a special counsel, in this instance with respect to allegations that the President’s campaign colluded with a foreign government. The special counsel is also explicitly authorized to review “any matters that arose or may arise directly from the investigation,” such as obstruction of justice.

But this time, certain lessons of the Saturday Night Massacre have been heeded. Before he was Attorney General, Mr. Sessions was a member of the Trump campaign. And so in his confirmation hearings to become Attorney General, in order to assure Senators of his own prosecutorial independence, Sessions promised the Senate that he would recuse himself from any future matters relating to the activities of the Trump campaign. He made good on that promise once he was confirmed, recusing himself and resulting in the appointment of Special Counsel Bob Mueller by Deputy Attorney General Rod Rosenstein.

And so, much as in the days of Watergate, today we have a Special Counsel investigating possible crimes committed during President Trump’s campaign in the last election and its aftermath. But when the President calls for the Special Counsel to be fired, his personal lawyers are quick to minimize his remarks, and assure the public that no firing is contemplated. In so doing, they are no doubt remembering the actions of those two principled prosecutors on that Saturday night in October, 45 years ago, and the public’s broad support of those actions. Such examples, more than anything in the statute books, are what define prosecutorial independence.

This tradition will be tested like never before in the months ahead, as not only the Special Counsel, but independent federal and state prosecutors in New York investigate individuals and entities close to the President.

I expect that in the face of these unprecedented attacks on their independence, federal and state prosecutors will continue their work without fear of favor. And gatherings like these reinforce the notion that the entire world is watching to see that we do. So thank you for being here and for centering your conference around this supremely timely topic.

Take immigration, a social issue currently roiling the United States and many of the countries you represent here today. Attorney General Sessions announced in April a “zero-tolerance policy” for immigrants who enter our borders without documentation – ordering federal prosecutors to make immigration enforcement their highest priority, and to bring “the full prosecutorial powers of the Justice Department” against anyone who enters the country without authorization. The following month, he announced exactly what that would mean: that the federal government would detain and prosecute literally every person who crosses the border illegally – a misdemeanor offense – and would separate immigrant children from their parents in furtherance of this policy. A month later, for good measure, the Attorney General ended grants of asylum for immigrants fleeing domestic violence, gang violence, or sex trafficking in their native country.

These policies have quite frankly terrified members of my community, and they’ve united us in opposition as well. New York – the safest big city in America – is a city of immigrants, and we regard undocumented New Yorkers as equal members of our community. These policies threaten to marginalize immigrant New Yorkers to the point where they no longer report crimes or terror plots. And so, local prosecutors like me now have to work twice as hard to assure immigrant New Yorkers that our office is a safe place to report crime without fear of getting deported. We – prosecutors – are now lobbying to restrict federal immigration authorities from trolling our courthouses for undocumented immigrants, so that immigrants can once again feel safe coming to court, and helping us take criminals off our streets.

A conference like this, with representatives from the four corners of the earth, should serve as a reminder that however different our jurisdictions and our laws and our histories, our most important resource is our independence. That independence allows us to listen to our own conscience and do what we believe is right, wherever that leads us. It empowers us to follow only the truth, the law, and our conscience. It empowers us to hold the powerful to account and to spare the powerless from the excesses of our work. And in doing so, we in turn preserve that gift for the lawyers who serve under us – and for the generations of prosecutors who will follow.