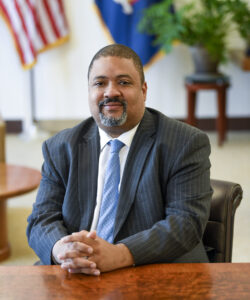 Alvin Bragg is the 37th District Attorney elected in Manhattan. Alvin – a lifelong Manhattanite who served as a state and federal prosecutor – has spent more than two decades fighting to make our communities safer and our criminal justice system fairer.

Abdullah el-Faisal, a Jamaican who was an outspoken supporter of the Islamic State, was the first person to face trial under New York State terror laws passed after Sept. 11.

“This case was about the far reach of crimes committed by Shaikh Faisal and the promotion of terrorism. Faisal aided ISIS as it committed horrific violence against innocent people,” said District Attorney Bragg. “I am proud of the work our prosecutors and analysts have done in collaboration with NYPD to ensure we stay ahead of these threats and ensure greater safety and security for all. We will continue to use the full force of our Counter Terrorism Program.”

D.A. Bragg: Attorney Sentenced to 12 Years in Prison for Sexually Assaulting Three Women After Following Them Into Their Apartment Buildings

“This sentence sends the message that in New York, cold cases do not go forgotten,” said District Attorney Bragg. “DNA evidence coupled with an anonymous tip received years after these horrifying crimes of escalating violence led to Rashaun Kelley’s arrest, and ultimately, to today’s sentencing. I would like to thank the attorneys in my Office for their diligent work on this prosecution and trial, and the NYPD officers who investigated and made this cold case arrest. Most of all, I thank the three survivors for their courage in testifying at trial, and hope today’s prison sentence helps close this chapter in their lives.”

A man was indicted Thursday for allegedly killing two people, including a doctor, and injuring several others during a violent spree in Manhattan.

“Roland Codrington allegedly wreaked havoc across the city in a crime spree that left two dead,” said District Attorney Bragg. “Manhattanites deserve to live their daily lives without the fear of being attacked. My thoughts are with the families and loved ones of the victims.”

Alvin Bragg @ManhattanDA
17 hours ago
Tonight our prayers are with the family and loved ones of Tyre Nichols. Nothing will bring Tyre back or begin to take this unbearable pain away. We mourn tonight by reflecting on his loss and keeping Memphis in our hearts.
View on Twitter

Alvin Bragg @ManhattanDA
1 day ago
Manhattanites deserve to live their daily lives without the fear of being attacked. Yesterday we announced murder charges against a man for allegedly killing two people and injuring two others during a violent spree in Manhattan. Read more in @PIX11News: https://t.co/oEooXUeWps
View on Twitter
0
9

Abdullah el-Faisal, a Jamaican who was an outspoken supporter of the Islamic State, was the first person to face trial under New York State terror laws passed after Sept. 11.
View on Facebook