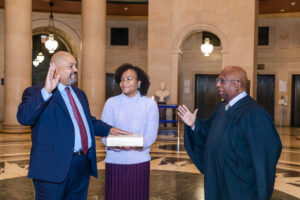 Alvin L. Bragg, Jr. was officially sworn in as District Attorney of New York County (Manhattan). Only the fourth person to be elected to this office in the last 80 years, he made history as the first Black Manhattan DA.  Bragg was sworn in in a private ceremony by the Clerk of New York County, the Honorable Milton Tingling. The community Inauguration ceremony has been rescheduled for Sunday March 6th.

“I am honored by the trust placed in me, motivated by the challenge in front of us, and ready to work together—to make our communities safer, our city more just, and to deliver one standard of justice for all,” said DA Bragg. “I will bring new leadership and a new perspective to this office, informed by my lived experiences: having been wrongly stopped at gunpoint by the police three times; had a semi-automatic weapon pointed at my head, a homicide victim on my doorstep, and just recently had to walk through a crime scene – the aftermath of a shooting on my block– to get into my home with my family; and had a close relative return from incarceration and solitary confinement and stay with my family as he tried to get back on his feet.

“I will govern tirelessly from the perspective of the communities most impacted by the justice system. Together we will make the Manhattan DA’s Office a leader on reforms that make our communities safer: ending racial disparities and mass incarcerations; getting justice for survivors of sexual assault and stopping the flow of guns onto our streets; investing in reentry programs and expanding treatment for mental health and substance use disorder. My administration will address the humanitarian crisis at Rikers, hold police accountable, free the wrongly convicted, and deliver justice for all.

“I love this city, this borough, and its people, that gave me the chance to succeed. I know the road to reform will not be easy, but I promise that I will never stop working to achieve the change that New York’s criminal justice system so desperately needs.

“This has been a long journey that started in the same place I’ve lived my whole life, the village of Harlem. And today, that 15-year old boy who was stopped at gunpoint by the police is the Manhattan District Attorney.”

Alvin Bragg was overwhelmingly elected Manhattan District Attorney, becoming only the fourth person elected to this office in 80 years. A son of Central Harlem, Alvin has spent the better part of two decades standing up to the powerful and fighting to get justice – serving as Chief Deputy Attorney General in New York State, the first Chief of a special unit that investigated police-involved killings, an Assistant U.S. Attorney in the Southern District of New York, a civil rights attorney and a Visiting Professor of Law and Co-Director of the Racial Justice Project at New York Law School, where he represented the family of Eric Garner in a case against the mayor seeking key details about Mr. Garner’s killing.