Fourteen Antiquities Seized from Michael Steinhardt, Two from an Ongoing Investigation, and 12 Coins Seized from Arnold Peter Weiss All Returned at a Repatriation Ceremony Held at the Turkish House

Manhattan District Attorney Alvin Bragg today announced the return of 28 antiquities valued collectively at approximately $4.6 million to the people of Turkey. In December 2021, the Manhattan D.A.’s Office concluded a multi-year, multi-national criminal investigation into MICHAEL STEINHARDT, one of the world’s largest ancient art collectors, seizing 180 stolen antiquities valued at $70 million and imposing a first-of-its-kind lifetime ban on acquiring antiquities. Fourteen of the objects returned were seized from STEINHARDT’s collection, two others were seized as part of another ongoing investigation, and 12 coins were seized during the prosecution of ARNOLD PETER WEISS in 2012. All the antiquities were returned during a repatriation ceremony attended by Turkey’s Consul General Reyhan Özgür and U.S. Homeland Security Investigations (“HSI”) Assistant Special Agent-in-Charge, Michael Alfonso. The ceremony was held at The Turkish House, which houses both the UN mission and the Consulate. Today’s event was the third repatriation ceremony held to return antiquities from STEINHARDT’s seized collection.

“Manhattan is home to countless art museums, galleries, and antique stores – there’s no shortage of beautiful art around every corner,” said District Attorney Bragg. “But, what so many in the art world fail to acknowledge is that stolen artifacts should not be collectible property for sale to the highest bidder: they’re evidence of thefts and looting committed around the world. Collectors and admirers must do their part to ensure items have been lawfully acquired. And, we at the Manhattan DA’s Office are committed to ensuring that those peddling in stolen and looted antiquities are put to a stop.”

Mr. Reyhan Özgür, Consul General of the Republic of Turkey in New York, said: “We would like to express our gratitude to the Office of the Manhattan District Attorney and Department of Homeland Security for their efforts regarding the recovery and return the 28 Antiquities to the Republic of Türkiye. Officials of the Combatting Illicit Trafficking Department at Ministry of Culture and Tourism of Türkiye are proud of being part of the investigation process. We appreciate dedication and hard work of all American and Turkish officials These antiquities are priceless for Turkish people. They symbolise our rich and vast cultural heritage which is based on many civilizations. Now, they are being returned to their rightful owners. Illicit trafficking of cultural property can be prevented through coordination at the international level. We believe that cooperation between related Turkish authorities and the Office of District Attorney will yield more fruitful results in the coming period.”

HSI New York Acting Special Agent-in-Charge, Ricky J. Patel, said: “HSI is proud to be a part of this grand repatriation of more than two dozen priceless artifacts to the government of Turkey.  With fourteen of these items from the collection of billionaire Michael Steinhardt and rare coins from prominent surgeon and collector Andrew-Peter Weiss, this repatriation is the result of multiple transnational investigations.  The continued efforts of HSI New York’s Cultural Property, Arts and Antiquities Group and the Manhattan District Attorney’s office is a testament to the importance of preserving cultural history from around the world and ensuring antiquities find their way home.”

According to filed documents, STEINHARDT purchased “The Stag’s Head Rhyton,” which depicts a finely wrought stag’s head in the form of a ceremonial vessel for libations, from The Merrin Gallery for $2.6 million in November 1991. The item, which dates to 400 B.C.E., first appeared without provenance on the international art market after rampant looting in Milas, Turkey. In March 1993, STEINHARDT loaned the Stag’s Head Rhyton to the Metropolitan Museum of Art, where it remained until the D.A.’s Office applied for and received a warrant to seize it. Today, the Stag’s Head Rhyton is valued at $3.5 million.

Along with the Stag’s Head Rhyton, the Manhattan D.A.’s Office returned 13 other antiquities seized from Steinhardt to the people of Turkey:

On January 3, 2012, pursuant to a joint investigation with the District Attorney’s Office, agents from HSI and HSI Attaché Rome arrested ARNOLD PETER WEISS, at the Waldorf Astoria hotel in New York City. At the time of his arrest, WEISS, a Rhode Island resident, believed himself to be in possession of two stolen dekadrachma from Agrigento, Sicily.

On July 3, 2012, WEISS pleaded guilty in New York State Supreme Court to three counts of Attempted Criminal Possession of Stolen Property in the Fourth Degree for the possession of three coins the defendant believed to be stolen dekadrachma and tetradrachm from the Sicilian cities of Agrigento and Catania.

As part of his plea agreement and sentence, WEISS agreed to forfeit 23 coins in his possession, pay a criminal fine, perform 70 hours of community service, and author an article for the American Numismatic Society Magazine detailing the dangers of collecting unprovenanced coins.

Twelve of the coins, with a collective value of $58,000, from WEISS’ collection were repatriated to Turkey as part of today’s ceremony. 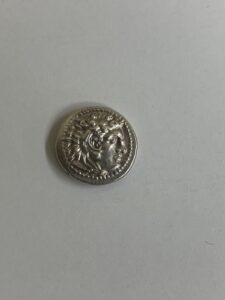 Two additional antiquities, valued at $6,000, that were seized as part of a separate ongoing investigation, “Large Marble Head from a Kilia” one and two, were also returned to Turkey.

District Attorney Bragg thanked HSI New York, the Turkish Consulate General in New York and  Zeynep Boz of the Combatting Illicit Trafficking Department at Turkey’s Ministry of Culture and Tourism for their assistance with the matter.