Repatriated Antiquities Date Back to 7000 B.C.E and Include Gold Masks, Carved Ivory Head and Death Masks

Antiquities Repatriated by D.A. Bragg This Year Valued at Over $30 Million 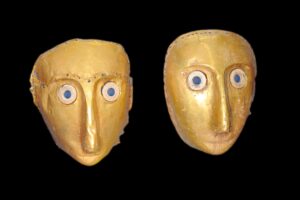 Manhattan District Attorney Alvin L. Bragg, Jr., today announced the repatriation of 39 antiquities, valued collectively at more than $5 million, to the people of Israel. In December 2021, the Manhattan D.A.’s Office concluded a multi-year, multi-national criminal investigation into MICHAEL STEINHARDT, one of the world’s largest ancient art collectors, seizing 180 stolen antiquities valued at $70 million and imposing a first-of-its-kind lifetime ban on acquiring antiquities. All of the antiquities were seized from STEINHARDT’S collection, and were repatriated during a ceremony attended by Dr. Eitan Klein, Deputy Director of the Theft Prevention Unit within the Israel Antiquities Authority (IAA) and U.S. Homeland Security Investigations (“HSI”) Acting Deputy Special Agent-in-Charge Mike Alfonso.

“These rare and beautiful artifacts, which are thousands of years old, have been kept from the public because of illegal looting and trafficking,” said District Attorney Bragg. “My office is proud to once again return historic antiquities to where they rightfully belong. In just the first few months of 2022 my office has repatriated artifacts totaling over $30 million in value. We will continue to aggressively root out bad actors who loot countries of these historical marvels, and I thank my office’s Antiquities Trafficking Unit and law enforcement partners for their outstanding work.”

“We would like to express our gratitude to the Office of the Manhattan District Attorney and Department of Homeland Security for their efforts regarding the recovery and return the 39 Antiquities to the State of Israel,” said Dr. Eitan Klein, Deputy Director of the Theft Prevention Unit within the Israel Antiquities Authority. “The Israel Antiquities Authority and the Israeli Antiquities Theft Prevention Unit are proud of being part of the investigation. These antiquities are priceless for the State of Israel and its people. They symbolise our rich and vast cultural heritage. Now, they are being returned to their rightful owners. Illicit trafficking and looting of cultural property can be prevented through coordination at the international level. We believe that cooperation between the State of Israel and the United States of America will yield more fruitful results in the coming period.”

Homeland Security Investigations (HSI) New York Acting Special Agent-in-Charge Ricky J. Patel said: “With every grand repatriation comes the satisfaction of knowing another piece of history has been returned to its home country.  Each pilfered artifact tells its own story with each line or mark retelling its journey through history like words on a page.  It is with great pleasure that HSI New York’s Cultural Property, Arts and Antiquities group, together with our partners at the Manhattan District Attorney’s Office, is able to share the part of the story that involves the journey home for more than two dozen artifacts to the Government of Israel.  Although the combined value of these treasures are in the millions, the cultural significance of their return to their rightful home cannot be quantified.”

Of the 39 objects that are to be repatriated to Israel, 28 were turned over to Israeli authorities today. Three have already been transferred to Israel and eight have not yet been located, but will be returned as soon as they are found.

According to filed documents, STEINHARDT purchased 28 of the items from Gil Chaya, an Israeli antiquities dealer who, with his then-wife, would buy illegal antiquities directly from looters. Files seized from STEINHARDT illustrate the extent of this practice. For example, the seized material contains numerous exchanges between the Chaya’s and looters, who they directed to look for a missing part of antiquities lost during looting. After receiving the freshly looted material, Chaya would also arrange for the antiquities to be cleaned and restored, frequently doing it himself. On one occasion, Gil Chaya cleaned a dirty antiquity in a New York City hotel bathtub before bringing it to STEINHARDT’S apartment. 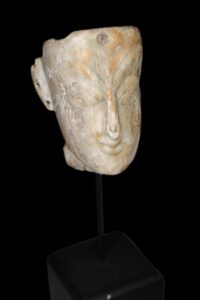 Other antiquities repatriated to the people of Israel includes: 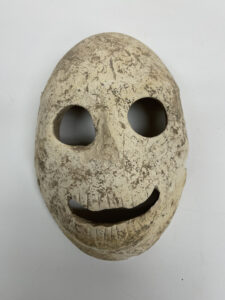