Manhattan District Attorney Alvin L. Bragg, Jr., today announced the indictment of ROBERT TAYLOR, 35, for operating an illegal Bitcoin ATM business that he marketed towards individuals engaged in criminal activity. TAYLOR operated Bitcoin kiosks in at least 46 locations in New York City, mostly in laundromats, as well as locations in New Jersey and Miami. Between 2017 and 2018, TAYLOR converted more than $5.6 million of his customers’ cash into Bitcoin while charging a fee of between 10% and 20%. TAYLOR is charged in a New York State Supreme Court indictment with multiple counts of Operating an Unlicensed Money Transmission Business, Criminal Tax Fraud in the Third Degree, and Offering a False Instrument for Filing in the First Degree. [1]

“Robert Taylor allegedly went to great lengths to keep his Bitcoin kiosk business as secret as possible to attract a clientele that would pay top dollar for anonymity,” said District Attorney Bragg. “As the use of cryptocurrencies like Bitcoin proliferate, they continue to attract a wide-range of bad actors who are hoping to evade law enforcement. My Office will continue to root out these schemes – we will not allow digital currencies to become safe havens for illegal activity.”

As alleged in court documents, TAYLOR attempted to keep his business completely anonymous despite his extensive network of ATMs. The only identifying information contained on the kiosks concerning their ownership was a “Snapchat” icon, which linked to an anonymous Snapchat account that only contained information about a pre-paid “burner” phone and a “protonmail.com” email account, a Swiss-based encrypted email service. The Snapchat account told customers not to disclose the location of the kiosks, telling one customer not to “tell other bitcoin companies about our machines. We need to stay hidden.”

According to court documents, TAYLOR’s customers were willing to pay fees ranging from 10% to 20% for the promise of anonymity. Unlike licensed Bitcoin ATMs and cryptocurrency exchanges, his kiosks did not require customers to provide any identification or other “know your customer” information prior to making deposits. TAYLOR advertised the anonymity of his machines on his Snapchat account, telling one customer that “we never ask for ID or have a camera that takes a pic of your face.” He also shared an advertising video showing a man from the torso down (so his face is not visible) spreading out a large stack of U.S. currency. The man says he only buys Bitcoin “in the laundromats; these racks only go into the machine with no ID and no camera.” 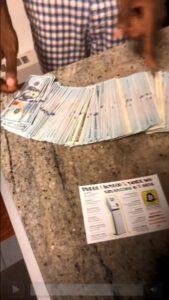 Customers were discouraged from using other bitcoin companies unless “you like having your ID and pic taken.” When one customer complained about his high fees, the Snapchat account replied, “Bro we gotta maintain everyone’s privacy. It’s worth the money.”

Surveillance and records obtained during the investigation revealed that TAYLOR’s business model attracted clients involved in criminal activity. One of the first individuals whom law enforcement observed using one of TAYLOR’s kiosks was driving a stolen U-Haul vehicle. Other customers had recent criminal records, often related to drug sales or credit card theft.

During the course of the investigation, search warrants were executed at TAYLOR’s Manhattan penthouse apartment and more than 20 different locations that housed his Bitcoin kiosks. Among other evidence, a sketch of two young men installing a Bitcoin kiosk in a laundromat hung in TAYLOR’s apartment.

In total, the search warrants resulted in the recovery of $250,000 in cash from TAYLOR’s apartment, as well as 20 Bitcoin ATMs containing $44,000 in cash. Forensic analysis of the kiosks indicated that more than $5.6 million in cash was deposited into TAYLOR’s kiosks between September 2017 and November 2018, generating more than $590,000 in fees, approximately $160,000 of which was deposited into TAYLOR’S personal bank accounts. Despite this, TAYLOR only claimed income of approximately $3,000 on his 2017 tax returns, and a loss of $140,000 on his 2018 tax returns, among other false representations.

TAYLOR and his businesses did not have a money transmission license from the New York State Department of Financial Services (“DFS”) or the U.S. Department of the Treasury, Financial Crimes Enforcement Network, or a virtual currency business license from DFS. Under DFS regulations, an individual operating a Bitcoin kiosk business must have a license to engage in “Virtual Currency Business Activity,” commonly called a BitLicense.