Manhattan District Attorney Alvin L. Bragg, Jr., today announced the sentencing of SAMUEL FISHER, 33, to 3 1/2 years in prison for illegally possessing numerous loaded firearms in an Upper East Side apartment, including a modified semi-automatic AR-15 style assault rifle, a “ghost gun” pistol, a shotgun, as well as 11 pre-loaded high-capacity magazines. FISHER, a QAnon conspiracy theorist who participated in the January 6th Capitol insurrection in Washington D.C., previously pleaded guilty to one count of Criminal Possession of a Weapon in the Second Degree.

“Samuel Fisher is a dangerous conspiracy theorist who participated in one of the gravest attacks on our democracy,” said District Attorney Bragg. “Not only did he threaten to commit violence against his fellow citizens, he had the potential to follow through with his arsenal of advanced weaponry and ammunition. Today’s sentencing makes clear that we will hold accountable those who possess illegal firearms and high-capacity magazines in our city. I thank our talented attorneys for their hard work delivering justice in this incredibly important case.”

As stated during the defendant’s guilty plea and in documents filed in court, FISHER utilized the alias “Brad Holiday” on his Facebook and YouTube accounts and on a personal website, where he posted photos of himself with firearms. In one instance, FISHER posted a photo on Facebook of himself holding weapons with the caption, “Can’t wait to bring a liberal back to this freedom palace.” 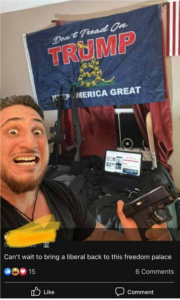 Evidence uncovered during the investigation showed that FISHER also posted about his belief that the 2020 election was stolen and espoused QAnon conspiracy theories. On December 15, 2021, just weeks before the January 6th insurrection attempt, FISHER told a Facebook friend, in reference to the Stop the Steal rally, “get a firearm and go lol, its 1776 time dawg.” On January 6, 2021, FISHER published a blog titled, “January 6, 2021 Will Be the Most Historically Important Day of Our Lives,” writing about the need to “stand up to the evils of this Government… and remove them physically.” FISHER also listed possible outcomes for January 6th, including “Trump has an Ace card up his sleeve. He plays it. The Deep State is arrested and hanged on the White House lawn for High Treason. We rebuild America with a government for the people by the people,” and “Trump fails. Biden gets installed… Patriot show up in the millions with guns. They execute all the treasonous members of government and rebuild.”

After the insurrection, FISHER told a friend “I was there . . . it was awesome” …“it was dangerous and violent” and, “in all seriousness and get ready . . . get in shape and see if you can find someone that knows medical/veteran w/ combat experience.”

Two weeks after the insurrection, a search warrant was executed on FISHER’S apartment and vehicle, where the weapons and ammunition were recovered.

D.A. Bragg thanked the FBI’s Joint Terrorism Task Force – which consists of investigators and analysts from the FBI, the NYPD, and over 50 other federal, state, and local agencies – especially JTFF members Special Agent Katherine Angulo and Detective Dominick Vasaturo.