Manhattan District Attorney Alvin L. Bragg, Jr., announced the return of antiquities to the People of Iraq that were looted from the Iraq Museum in 2003. The pieces were smuggled into the United States, where they were purchased through various galleries and online auctions by a private collector between 2004-2009. The antiquities were returned during a repatriation ceremony attended by Iraq’s Charge D’Affaires Dr. Salwan Sinjar and U.S. Homeland Security Investigations (“HSI”) Assistant Special Agent in Charge Tom Acocella.

“These stunningly preserved artifacts are just a few of the many antiquities looted from the Iraq Museum. Thanks to the thoroughness of our investigators and prosecutors, we discovered that these pieces were for sale online without the proper documentation. We are pleased that they are finally returning home to the museum where they rightfully belong,” said District Attorney Bragg.

“I’m grateful for the work by the Manhattan District Attorney’s Office for its efforts to repatriate these precious, historic antiquities to Iraq,” said Dr.Salwan Sinjari, Iraqi Chargé d’Affairs to the United States. “These pieces belong to Iraq—and belong in Iraq—and now they will help the Iraqi people better understand and appreciate our own history and culture with this connection to the past. This is another example of the longstanding cooperation, friendship, and partnership between Iraq and United States.”

“Homeland Security Investigations is proud to stand with our partners from the Manhattan District Attorney’s Office and the Republic of Iraq to return these ancient cylinder and stamp seals. These items were looted by thieves taking advantage of the confusion of war to turn a profit with total disregard to their cultural value,” said Ivan J. Arvelo, Special Agent in Charge of Homeland Security Investigations in New York. “These artifacts date from as far back as 2700 B.C.E. and were a critical part of everyday life in the ancient world. Now, they will return to their rightful home.”

The pieces returned include four cylinder seals and three stamp seals dating to between the Mesopotamian (2700-2500 B.C.E.) and the Neo-Babylonian (612-539 B.C.E.) periods. These seals were an important part of daily life and are engraved with figurative scenes. The carved illustrations on these seven seals depict images of gods, human figures, animals, and other scenes of worship. Each unique seal served as a personal signature to guarantee authenticity of either an individual or a business, and appear today almost exactly as they would have looked to the ancient people who used them.

In March of 2021, one of the stamp seals was listed for sale in an online auction, leading this Office to begin an investigation into its origin and provenance. Our investigation revealed that the consignor of this stamp seal was in possession of six additional seals that were all purchased shortly after the looting of the Iraq Museum and lacked any documentation confirming that they had entered the art market prior to 2003. 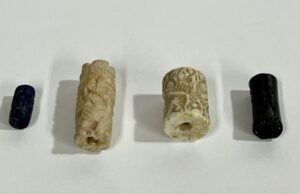