Manhattan District Attorney Alvin L. Bragg, Jr. today announced the indictment of THOMAS BLACKALLER SPIEKER, JR., 42, for operating a global money laundering business that enabled at least 7 clients, who engaged in a wide-range of criminal activity, to use Bitcoin anonymously to hide and obscure their illegal proceeds. Between January 2018 and August 2021, SPIEKER converted more than $2.3 million into Bitcoin and more than $380,000 worth of Bitcoin into U.S. dollars, using a rotating set of accomplices including DUSTIN SITES, 33, to open bank and cryptocurrency exchange accounts to launder criminal proceeds.

Many of SPIEKER’s clients are also charged for criminal activity uncovered by the Manhattan D.A.’s Office’s investigation, including ZASHAN KHAN, 30, and COSMA SIEKIERSKI, 25, who are charged with operating an illegal drug marketplace on the dark web that manufactured and sold MDMA, ketamine, and counterfeit Xanax to all 50 states; and ANDERSON LAROC, 33, who is charged with a “SIM-swapping” identity theft scheme that targeted 30 victims across the U.S.

“As alleged, this sprawling web of international money laundering helped drug traffickers, an organized crime ring, and scammers hide their criminal activity and transmit their proceeds around the globe,” said District Attorney Bragg. “This case shows us how new technologies like cryptocurrency can become key drivers of a wide-range of criminal activity that can easily span across the globe, but the indictment today makes clear that my Office has the tools and expertise to uncover and prosecute these schemes in any form that they take. As technology evolves, so does our work, and alongside our partners, we will continue to dismantle these complex crime rings.”

“It is alleged that the defendant charged today openly bragged about laundering illicit proceeds for a rolodex of crooks involved in a variety of unscrupulous activity ranging from dark web drug dealing to identity theft and other online scams,” said Homeland Security Investigations (HSI) New York Acting Special Agent in Charge Ricky J. Patel.  “While Bitcoin and other cryptocurrencies are quickly emerging as alternatives to traditional monetary payments, transnational criminal organizations and malicious actors are evolving to utilize these methods of payment to launder dirty money in perceived anonymity.  Today’s arrests demonstrate HSI’s commitment to work with its partners and unravel the most sophisticated of cyber schemes and bring to justice those that manipulate technology for illicit purposes.”

“So-called drug peddlers believe they can hide behind the anonymity of the ‘dark web’ to distribute illicit drugs and reap the benefits of their proceeds; but make no mistake—their crimes will be uncovered and brought to light by law enforcement, sparing no resource to protect the public from criminal activity,” said United States Postal Inspection Service Inspector in Charge Daniel B. Brubaker.

According to the indictment and documents filed in court, SPIEKER provided money laundering services for individuals seeking anonymous cash-to-Bitcoin (or Bitcoin-to-cash) conversion beginning in 2014. SPIEKER conducted numerous Google searches for “bitcoin money laundering” and researched articles about people convicted of laundering Bitcoin, including prior cases brought by the Manhattan District Attorney’s Office. In a 2018 Facebook post, SPIEKER stated that his services were for those who wanted to “STAY COMPLETELY OFF THE RADAR.” SPIEKER conducted his business knowing that his customers were engaged in criminality. In one instance, he bragged to a friend about how much money he was making laundering funds for a “skittish k[etamine] dealer.” In another message, he noted that “85%” of his clientele was “running CC [Credit Card] hustles.”

SPIEKER primarily used “proxies” to open the bank and cryptocurrency exchange accounts needed to facilitate his transfers. Between March 30, 2018, and June 30, 2020, SPIEKER and three of his proxies, including SITES, opened 28 bank accounts and eight cryptocurrency exchange accounts. They met with clients and gave them cash in exchange for Bitcoin, or vice-versa, for a fee of 4%-12%.

As alleged, SPIEKER also laundered more than $380,000 for KHAN and SIEKIERSKI, who are charged with manufacturing and selling MDMA, ketamine, and counterfeit Xanax through their dark web vendor OVO_Sweatshop (“OVO”), which took its moniker and logo from the rapper Drake’s “October’s Very Own” clothing line. 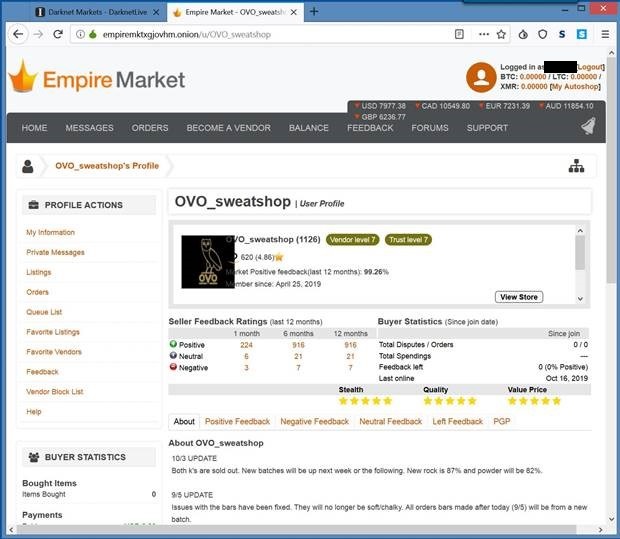 Together, they shipped more than 3,300 packages of drugs to all 50 states by dropping them into mailboxes in Brooklyn and Manhattan. Undercover Manhattan D.A. investigators purchased controlled substances from OVO, including MDMA and Ketamine, on nine separate occasions. To run their operation, KHAN and SIEKIERSKI paid $42,000 for postage alone, and ordered more than 60 pounds of pharmaceutical pill mix powder, five small scales, more than 15,000 individual plastic bags, many of which are designated “smell proof,” in 56 purchases, a vacuum sealer, more than 1000 feet of vacuum sealer bag rolls, a label printer, approximately 7480 shipping labels in seven purchases, and approximately 4050 envelopes. 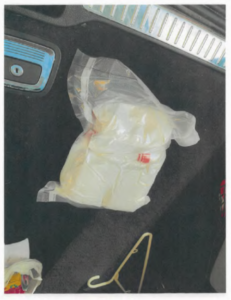 In November 2020, KHAN and SIEKIERSKI stopped shipping packages under the OVO moniker, and Rochester residents JOHN HUMPHREY and FIDELLO PALERMO took over. Every few weeks, when they ran out of product, HUMPHREY and PALERMO drove to Brooklyn to pick up Ketamine. On their final trip to Brooklyn on June 21, 2021, PALERMO and HUMPHREY were stopped and a search warrant was executed on their vehicle. The trunk contained three large boxes filled with the same padded shipping envelopes that OVO used to ship liquid ketamine, 1.7 kilograms of powder and crystalline ketamine, and 140 clear vials of liquid ketamine, packaged identically to those sold by OVO.

“SIM swapping” refers to a scam in which a thief transfers a victim’s phone number to a phone owned by the thief. Once the phone number has been transferred to the thief’s phone, that person can then receive or place calls and send text messages using the stolen number. He or she can then circumvent text-based two-factor authentication security measures and intercept text messages containing security codes needed to reset passwords and access the victim’s online accounts.

As alleged, LAROC stole approximately $300,000 in an international SIM-swapping scheme with a co-conspirator located in Canada, who used the name “Big.” LAROC purchased SIM cards at the instruction of Big, who then transferred the victims’ phone numbers to the SIM cards. LAROC then provided two-factor authentication codes to Big, who used the codes to access the victim’s bank accounts and to order new debit cards, which were then shipped to addresses where LAROC could pick up the cards. When LAROC received the stolen debit cards, he drained the cash from the victims’ bank accounts by: making fraudulent PayPal charges; fraudulent purchases at fictitious businesses created by LAROC; withdrawing cash; and purchasing USPS money orders. Through this scheme, LAROC stole the personal identifying information of more than 30 individuals located across the United States, and made nearly $300,000 in fraudulent charges, including more than $77,000 from a Manhattan victim.

As detailed in documents filed in court, SPIEKER laundered $620,000 for what he described as his “whale client,” a member of an Eastern European organized crime syndicate. The “whale client” arranged for SPIEKER to travel to various locations in the United States, including Toledo, OH, Cincinnati, OH, Detroit, MI, Orlando, FL, Jacksonville, FL, Tampa, FL, Fort Lauderdale, FL, Charlotte, NC, and Atlanta, GA, often paying for SPIEKER’s travel with unauthorized transfers from compromised bank accounts. SPIEKER met an individual who gave him up to $40,000 in cash at a time. SPIEKER then sent Bitcoin to addresses controlled by the “whale client,” took an Amtrak train or bus back to New York with the cash, and converted it into Bitcoin. Part of the cash SPIEKER received from the “whale client” was generated from online fraud committed by hacking an “eBay” account.

SPIEKER also laundered more than $267,000 for the operator of a Nigeria-based romance scam who used the moniker “Mark Kindly.” One of Kindly’s victims was a nurse he met on a New York dating site. He pretended to own an elevator repair company in New Jersey that also did jobs overseas, and convinced her to send him money under a series of false pretenses – including to pay off people who were supposedly holding him in a Dubai prison.

D.A. Bragg thanked HSI New York, including Rick J. Patel, Acting Special Agent in Charge of HSI and Special Agent Robert Dunn; as well as USPIS, including Postal Inspectors Hamid Beltre and Diana Chau, and Inspector-in-Charge Daniel Brubaker; the NYPD, including Det. Brian Kusterer and Captain Eng; and the Amtrak Police Department, including Detective Adam Peterkin, for their valuable assistance with the investigation.

[1] The charge contained in the indictment is merely an allegation, and the defendants are presumed innocent unless and until proven guilty. All factual recitations are derived from documents filed in court and statements made on the record in court.