Manhattan District Attorney Alvin L. Bragg, Jr., and New York City Police Department Commissioner Keechant L. Sewell today announced the indictment of JOSE RIVERA, 47, for manufacturing multiple ghost guns, including assault weapons, in his Lower East Side Manhattan apartment. In total, RIVERA purchased at least 55 ghost gun parts worth over $7,000, including the “Ghost Gunner 3,” a fully-automated machine that can be used to manufacture ghost guns with the touch of a button.

“The allegations in this case once again make clear how easy it is for anyone to assemble a semi-automatic weapon in their own home,” said District Attorney Bragg. “Thanks to the work of our prosecutors and the hardworking detectives at the NYPD, we have prevented these firearms from hitting our streets and causing harm to New Yorkers. We must continue to enforce our strong gun laws in order to stop the flow of weapons into our city, whether they are from the iron or the polymer pipeline.”

“Ghost guns are the fastest-growing public-safety threat in our city and our nation,” said NYPD Commissioner Keechant L. Sewell. “Today’s charges reflect the promise we made to all the people we serve: that the NYPD and our law enforcement partners will continue seizing all manner of illegal firearms and arresting anyone who makes, possesses, or uses them. Our job is to keep people safe, and we vow to do everything possible to fulfill that mission. I thank and commend all of the members of the NYPD’s Major Case Field Intelligence Team, the New York State Police, the Pennsylvania Office of the Attorney General, and the Manhattan District Attorney’s Office for their hard work on this important case.”

New York State Police First Deputy Superintendent Steven A. Nigrelli said, “Once again, strong law enforcement partnerships have disrupted another illegal gun manufacturing operation. The indictment of Jose Rivera will not only keep dangerous weapons off our streets but will also disrupt the cycle of criminal activities that they produce. We will continue to make it a priority to find and dismantle these illicit endeavors to make New York state a safer place.” 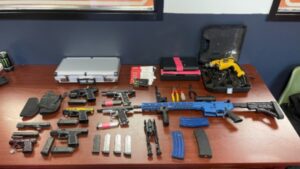 According to court documents and statements made on the record in court, between October 2016 and May 2022, RIVERA purchased at least 55 ghost gun components, many of which were sent to Pennsylvania because they are illegal under the New York SAFE Act.

On September 22, 2022, the NYPD and New York State Police executed a search warrant at RIVERA’s apartment on the Lower East Side and recovered six fully assembled ghost guns, three of which were loaded with high-capacity magazines. RIVERA made two of those guns into assault weapons, including an AR-15 style rifle. Approximately 200 rounds of ammunition and five major components were also recovered. Some of the firearms appeared to have been manufactured using the Ghost Gunner-3 machine from raw blocks of aluminum.

Two of the firearms were easily accessible to the two and three-year-old children living in the apartment, and were not locked or safely stored.

RIVERA had a prior felony conviction and was not allowed to possess any legal firearms.

The Manhattan District Attorney’s Office, in partnership with the NYPD and other law enforcement partners, established the Ghost Guns Initiative in 2020 to address the proliferation of ghost guns in New York City. To date, the Ghost Guns Initiative has prosecuted cases involving the seizure of over 79 ghost gun parts, 28 fully assembled ghost guns, 23 serialized firearms, 420 high-capacity magazines, 45 silencers, and other gear including scopes and rapid-fire modification devices.