Between March 2020 to March 2022, LOYOLA purchased the gun parts and high-capacity magazines from 12 different online retailers. The process of buying ghost gun parts from different retailers has been dubbed the “polymer pipeline.” The magazines recovered could collectively hold more than 8,600 bullets. LOYOLA sent multiple shipments of high-capacity magazines to an address in Pennsylvania because New York’s SAFE Act prohibited them for being sent directly to the state, and on one day traveled to the shipment location on the same date as the delivery.

“It is far too easy for anyone to buy the components needed to assemble a ghost gun. In just a few clicks, gun frames, receivers and high-capacity magazines can be delivered through the mail. While changing technology has enabled the rise of ghost guns, this case also illustrates how the iron pipeline contributes to the gun violence epidemic – New York’s strict laws initially kept these magazines out of our state, but Rene Loyola eventually took advantage of lax regulations elsewhere,” said District Attorney Bragg. We will continue to work closely with our law enforcement partners to find and prosecute those who are in possession of these illegal weapons.”

District Attorney Gonzalez said, “This defendant allegedly acquired a massive arsenal of gun parts that could easily have ended up as illegal ghost guns on the streets of our communities. Recovering these receivers, frames and magazines is important as we continue to fight to curtail the gun violence plaguing our city. I thank D.A. Bragg and the NYPD for their collaboration.”

“Our work in this case shows, once again, that the NYPD and its law enforcement partners will never stop doing their part to fight against the proliferation of illegal ghost guns that are flowing into our city in increasing numbers,” said Police Commissioner Keechant L. Sewell. “These guns shoot real bullets. They threaten New Yorkers and our way of life. But our intelligence-driven focus on interrupting the supply chains for these guns and component parts is intensifying thanks to our strong partnerships. The NYPD, our Intelligence Bureau Major Case team, and the offices of the Manhattan and Brooklyn District Attorneys and their prosecutors remain relentless in pursuing these important investigations and ensuring safety for all.” 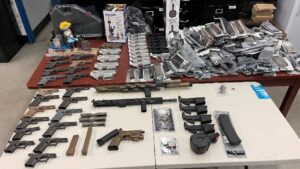 On April 20, 2022, the NYPD executed search warrants at Loyola’s residence in Brooklyn and storage facility unit in Manhattan and uncovered the weapons and gear. Rapid-fire modification devices and other power tools were also recovered.

The Manhattan District Attorney’s Office, in partnership with the NYPD and other law enforcement partners, established the Ghost Guns Initiative in 2020 to address the proliferation of ghost guns in New York City.  To date, the Ghost Guns Initiative has prosecuted cases involving the seizure of over 70 ghost gun parts, 20 fully assembled ghost guns, 23 serialized firearms, 412 high-capacity magazines, 45 silencers, and other gear including scopes and rapid-fire modification devices.