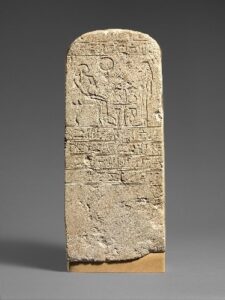 Pictured: “Stela of the Singer”

Manhattan District Attorney Alvin L. Bragg, Jr., today announced the return of 16 antiquities valued at over $4 million to the people of Egypt. Nine of the pieces were the result of the Office’s multi-year, multi-national criminal investigation into MICHAEL STEINHARDT, one of the world’s largest ancient art collectors, which also resulted in seizing 180 stolen antiquities valued at $70 million and imposing a first-of-its-kind lifetime ban on acquiring antiquities. Five of the pieces were seized from the Metropolitan Museum of Art pursuant to an investigation into the “Dib-Simonian” trafficking network. An additional piece from the Met was seized pursuant to an investigation into trafficker GEORGES LOTFI, the subject of an international arrest warrant issued by the Office last month. The final piece was seized pursuant to a separate ongoing investigation. All the antiquities were returned during a repatriation ceremony attended by Egypt’s Consul General Howaida Essam Mohamed, and U.S. Homeland Security Investigations (“HSI”) New York Acting Special Agent in Charge Ricky J. Patel.

“Today’s repatriation shows the breadth and prevalence of antiquities trafficking networks, but thanks to the work of our dedicated prosecutors and analysts, we have made tremendous progress in cracking down on this illegal activity,” said District Attorney Bragg. “We will not allow our borough to be used by dealers and traffickers to turn a profit off these stolen artifacts.”

Egypt’s Consul General Howaida Essam Mohamed said, “Our cooperation with the New York District Attorney’s Office has been eventful and fruitful to say the least during the last few years. It is safe to say that we can open an entire museum solely based on the artifacts repatriated via the support and efforts of the District Attorney of New York, and for that we are eternally grateful.”

“Today’s repatriation marks another victory in what has been a multi-year, international investigation into antiquities trafficking out of Egypt. Egypt’s rich history has long attracted looters and smugglers looking to profit from ancient artifacts taken heedlessly from their home without regard to the cultural history and the priceless value to the Egyptian people.  HSI New York and our colleagues at the Manhattan District Attorney’s Office have worked tirelessly with our international partners in Egypt and beyond to disrupt and dismantle the smuggling networks to recover these items and return them to the people of Egypt.  Our work continues, but today we are proud to stand with our partners to return these incredible pieces,” said Homeland Security Investigations (HSI) New York Acting Special Agent in Charge Ricky J. Patel.

The five pieces from the Dib-Simonian trafficking network – and seized from the Met – are collectively valued at $3.1 million. They were looted from archaeological sites in Egypt, smuggled through Germany or the Netherlands to France, and sold by the Paris-based Pierre Bergé & Associés to the Met. The information developed and shared by the Manhattan DA’s office with law-enforcement agencies around the world related to this investigation has led to the indictment or arrest of nine individuals in France, including the former Louvre Director Jean-Luc Martinez.

Two of the antiquities repatriated today include: