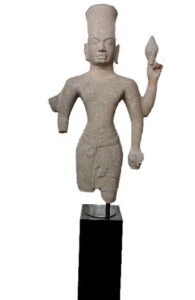 Manhattan District Attorney Alvin L. Bragg, Jr., today announced the return of The Standing Sandstone Vishnu, part of a 7th Century temple, to the people of Cambodia. In the early 1990s, the piece was broken and looted from the Eastern Cambodia temple at the direction of DORIS WIENER, a well-known antiquities trafficker. WIENER and a co-conspirator arranged for the piece to be restored, and was eventually smuggled into Manhattan in 1995 through Thailand. After it arrived in Manhattan, WEINER then sold The Standing Sandstone Vishnu to a private collector. It was returned during a repatriation ceremony with Cambodia attended by Cambodian Ambassador to the United States Keo Chhea and U.S. Homeland Security Investigations (“HSI”) Acting Assistant Special Agent in Charge Thomas Acocella.

“This antiquity was callously ripped away from an ancient temple so it could be sold for profit,” said District Attorney Bragg. “After it was illegally circulating on the art market and in a private collection for years, our Antiquities Trafficking Unit, in collaboration with our law enforcement partners, are finally returning this piece home.”

“My government is grateful for the excellent partnership we have developed with the United States government to return priceless antiquities to the Cambodian people. I want to specifically praise the Manhattan District Attorney’s Office and the Department of Homeland Security for their diligence and dedication to enforcing the law and doing what is right. The artifacts that have been repatriated—and others that I am sure will be repatriated in the future—are a vital part of our cultural legacy and our sense of nationhood. They were looted from places where they had been situated in peace for centuries, and they belong in Cambodia,” said Cambodian Ambassador to the United States Keo Chhea.

“Today we are proud to return the Standing Sandstone Vishnu to its rightful home, ensuring the cultural history of Cambodia no longer be pillaged with impunity.  This piece was stolen from Cambodia and smuggled into New York for profit by a known trafficker.  Homeland Security Investigations is committed to applying our unique investigative authorities and working alongside our partners at the Manhattan District Attorney’s Office to track down lost pieces like this and ensuring their return to their rightful owners – the people of Cambodia,” said Homeland Security Investigations (HSI) New York Special Agent in Charge Ivan J. Arvelo.

Beginning in the 1960s, WIENER dealt and trafficked in Southeast Asian antiquities, which she sold through her gallery in New York County. WIENER also sold antiquities with her daughter, NANCY WIENER, until Doris’s death in 2011. In 2016, the Manhattan District Attorney’s Office arrested NANCY WIENER, who was ultimately convicted and sentenced in 2021.

If you have information about stolen or trafficked antiquities, please contact 212-335-9323.