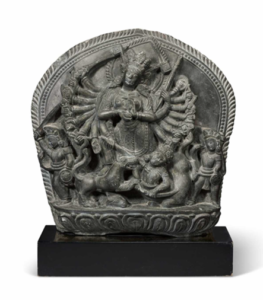 Manhattan District Attorney Alvin L. Bragg, Jr., today announced the return of the Durga Stele, a 14th century antiquity, to the people of Nepal. For centuries the piece was venerated in a shrine in the Kathmandu Valley until it was stolen in the 1960s. It resurfaced on the New York art market in 2022 and then was seized by the Antiquities Trafficking Unit (“ATU”). The Durga Stele was returned during a repatriation ceremony attended by Nepal’s Acting Consul General, Bishnu Gautam, and U.S. Homeland Security Investigations (“HSI”) New York Acting Deputy Special Agent in Charge Mike Alfonso.

“A single piece stolen from any country is one too many,” said District Attorney Bragg. “The historical, artistic, and cultural values attached to the Durga Stele are immeasurable, and I am pleased it is being returned to the people of Nepal”

Homeland Security Investigations (HSI) New York Acting Special Agent in Charge Ricky J. Patel said, “HSI is proud to be a part of this grand repatriation where a piece of history will be returned to its home country. The Black Stone Stele of Durga was looted from a temple in the Kathmandu Valley in Nepal but will be returned today to its rightful home so its history can be shared with future Nepali generations. The relentless efforts of HSI New York’s Cultural Property, Art and Antiquities Group and the Manhattan District Attorney’s Office is vital to disrupting the illegal trafficking of antiquities and ensuring these priceless artifacts find their way home.”

The Durga Stele, valued on the art market at approximately $18,000, was used in Hindu ceremonial rituals and depicts the goddess Durga. The piece surfaced with numerous Nepali statues smuggled by dealer and trafficker Doris Wiener during the 1960s before being sold to a private collector. When the piece was sold to the private collector it still had ritual pigment – typically a mixture of sandalwood and turmeric – that would have been applied during religious ceremonies.

The repatriation of the Durga Stele arose from the Office’s investigation into Nancy Weiner, the daughter of Doris Weiner, who was convicted in September 2021 for her role in trafficking and selling millions of dollars’ worth of stolen antiquities in New York County.