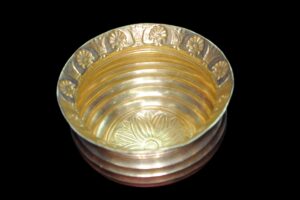 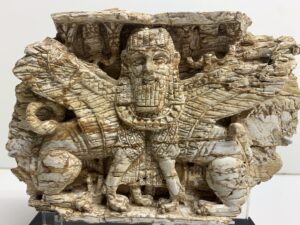 Pictured: “The Gold Bowl” and “The Ivory Plaque”

Manhattan District Attorney Alvin Bragg today announced the return of five antiquities valued collectively at approximately $688,500 to the people of Iraq. In December 2021, the Manhattan D.A.’s Office concluded a multi-year, multi-national criminal investigation into MICHAEL STEINHARDT, one of the world’s largest ancient art collectors, seizing 180 stolen antiquities valued at $70 million and imposing a first-of-its-kind lifetime ban on acquiring antiquities. Two of the objects returned today, “The Gold Bowl” and “The Ivory Plaque” were seized from STEINHARDT’s collection, three others were seized as part of another ongoing investigation. Theses antiquities were returned during a repatriation ceremony attended by Iraq’s Ambassador to the United States, Fareed Yasseen, and U.S. Homeland Security Investigations (“HSI”) Deputy Special Agent-in-Charge Erik Rosenblatt. Today’s event was the second repatriation ceremony held to return antiquities from STEINHARDT’s seized collection.

“Art is a window into the past, and particularly with pieces of this age, it’s often the only opportunity we have to study civilizations long-gone,” said District Attorney Bragg. “These illegally trafficked relics shouldn’t be kept in the mansion of a billionaire, thousands of miles away from their homeland. They should be on display in a museum or university in their country of origin, where the people of that nation can view and appreciate the glimpse into the lives of their ancestors. I’m honored to help make that possible today for the people of Iraq and committed to ensuring that stolen and looted antiquities trafficked in Manhattan are returned to their homelands.”

Ambassador Fareed Yasseen, Iraq’s envoy to the United States said: “I’m grateful to the Manhattan District Attorney and his Office for their ongoing and successful efforts to combat the smuggling of antiquities. In so doing, they have been able to repatriate these precious and historically significant antiquities to Iraq. These pieces are part of the heritage of the Iraqi people and so belong in Iraq, where they will be displayed in public museums to help the Iraqi people better understand and appreciate our own history and culture with this connection to the past. This is another very tangible example of the longstanding cooperation and friendship between the United States and Iraq.”

Homeland Security Investigations (HSI) New York Acting Special Agent-in-Charge Ricky J. Patel said: “HSI York’s Cultural Property, Arts and Antiquities Group, working with the Manhattan District Attorney’s office, repatriated five artifacts to the government of Iraq, two of which are related to the activities of billionaire art collector, Michael Steinhardt.  These treasures date back to the seventh century B.C. and eighth century B.C. and are now being returned to their rightful home. This grand repatriation represents the culmination of two transnational investigations that spanned multiple years and required tremendous collaboration and teamwork between HSI, its international partners, and the Manhattan District Attorney’s Office.”

According to filed documents, STEINHARDT purchased “The Gold Bowl,” which was looted from Nimrud, Iraq, with no prior provenance for $150,000 in July 2020. Beginning in 2015, objects from Nimrud were trafficked when the Islamic State in Iraq and the Levant (ISIL) targeted cultural heritage from Nimrud, Hatra, and Khorsabad, particularly ancient objects made of gold or precious metal. The Gold Bowl, which is crafted from gold with a scalloped flower design, first surfaced on the international art market in October 2019, when a Customs and Border Patrol officer notified the D.A.’s Office that SVYATOSLAV KONKIN was on a flight from Hong Kong to Newark, New Jersey, hand-carrying the relic for STEINHARDT. Today, the Gold Bowl is valued at $200,000.

STEINHARDT purchased the “The Ivory Plaque,” which depicts a human headed winged sphinx, in September 2010, for $400,000. The Ivory Plaque once decorated the royal furniture from the period of King Sargon I (721-725 B.C.E.) in Nimrud. During the early 1990s extensive looting occurred in this area in northern Iraq. The Ivory Plaque first surfaced on the international art market in November 1994. Today the Ivory Plaque is valued at $450,000.

The Manhattan D.A.’s Office also returned other antiquities, which were seized pursuant to another ongoing investigation, to the people of Iraq:

District Attorney Bragg thanked HSI New York and the Embassy for the Republic of Iraq in D.C. for their assistance with the matter.