Manhattan District Attorney Alvin L. Bragg, Jr., today announced the sentencing of CHESTER ANDERSON, 48, to nine years in state prison for serving as the ringleader of a major dark web drug trafficking scheme. ANDERSON and his co-conspirators operated storefronts on the dark web that sold and shipped hundreds of thousands of Xanax tablets and other controlled substances to buyers across the country and laundering more than $2 million in cryptocurrency.

“Chester Anderson profited by operating in the shadows of the dark web to sell illicit drugs,” said Manhattan D.A. Alvin Bragg. “Our office will continue to utilize our unparalleled cybercrime expertise and investigative skills to hold accountable those who think they can use cryptocurrency to facilitate dangerous illegal activity.” 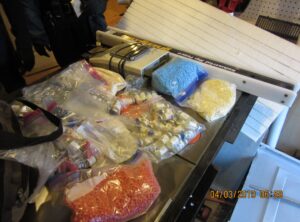 As admitted in the defendant’s guilty plea, ANDERSON and his co-conspirators operated two dark web storefronts and laundered approximately $2.3 million in proceeds by using the cryptocurrency they received as payment to load pre-paid debit cards. They collectively withdrew more than $1 million from ATMs in Manhattan and New Jersey.

Following a series of undercover purchases made in cryptocurrency of 10,000 Xanax tablets, in addition to ketamine and GHB, court-authorized search warrants were executed on New Jersey properties and vehicles associated with ANDERSON and his co-conspirators. During the course of the investigation, Manhattan D.A. investigators seized and recovered:

Through a shell company, Next Level Research and Development, ANDERSON and a co-conspirator purchased more than 1,000 kilograms of microcrystalline cellulose, the primary ingredient used to manufacture pharmaceutical tablets. He also used a co-conspirator’s Asbury Park, N.J., cellphone repair store, The Wireless Spot, to purchase a pill press, a powder mixer and “punch dies” used to imprint “Xanax” labels. 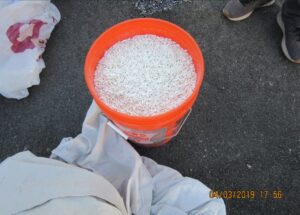