The Manhattan D.A.’s Office is committed to enhancing transparency in criminal justice. In addition to the regular reports we share on our website, we are now offering a more detailed look at our office’s cases, defendant demographics, and signature initiatives like ending the prosecution of marijuana smoking. Stay tuned for additional statistics and information, including downloadable data sets.

The Manhattan District Attorney’s Office has one of the largest caseloads in the United States. In 2018, the Manhattan D.A.’s Office screened 55,380 cases,[1] comprising 9,995 felonies, 44,033 misdemeanors, and 1,195 violations and/or infractions.[2] The D.A.’s Office declined to prosecute 4,191 of these cases (7.6%). While still among the largest in the nation, the Office’s caseload has decreased by over 48% since 2009, a year in which 107,208 cases were screened. This phenomenon reflects both the overall reduction in arrests across the city, as well as recent policy initiatives by District Attorney Cyrus R. Vance, Jr. to: 1) end the criminal prosecution of certain low-level offenses, and 2) divert individuals into social services in lieu of arraignment and prosecution. 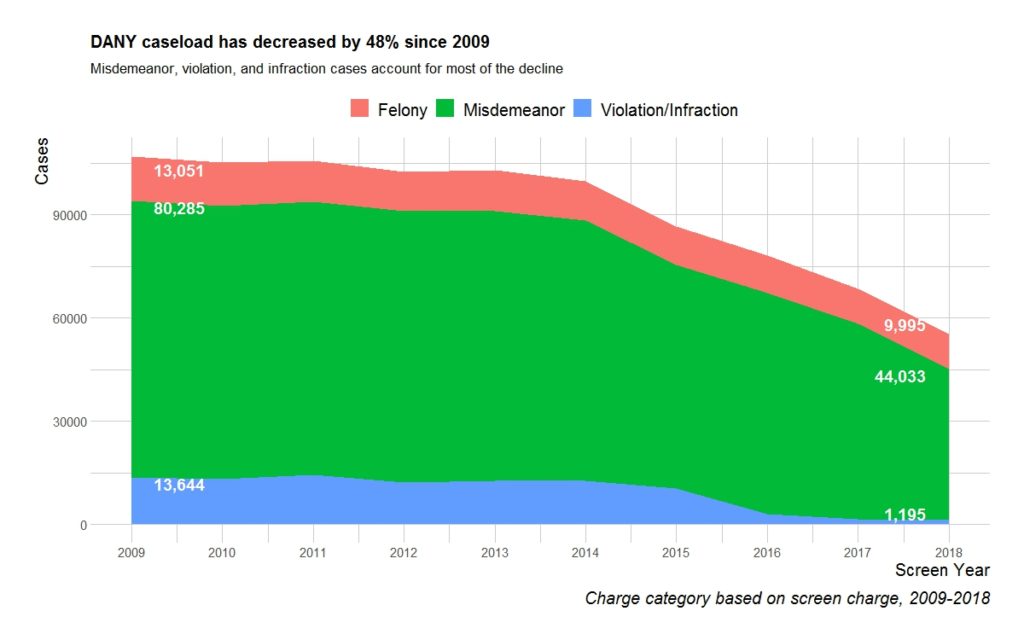 Arraignments at a Glance

Charges at a Glance 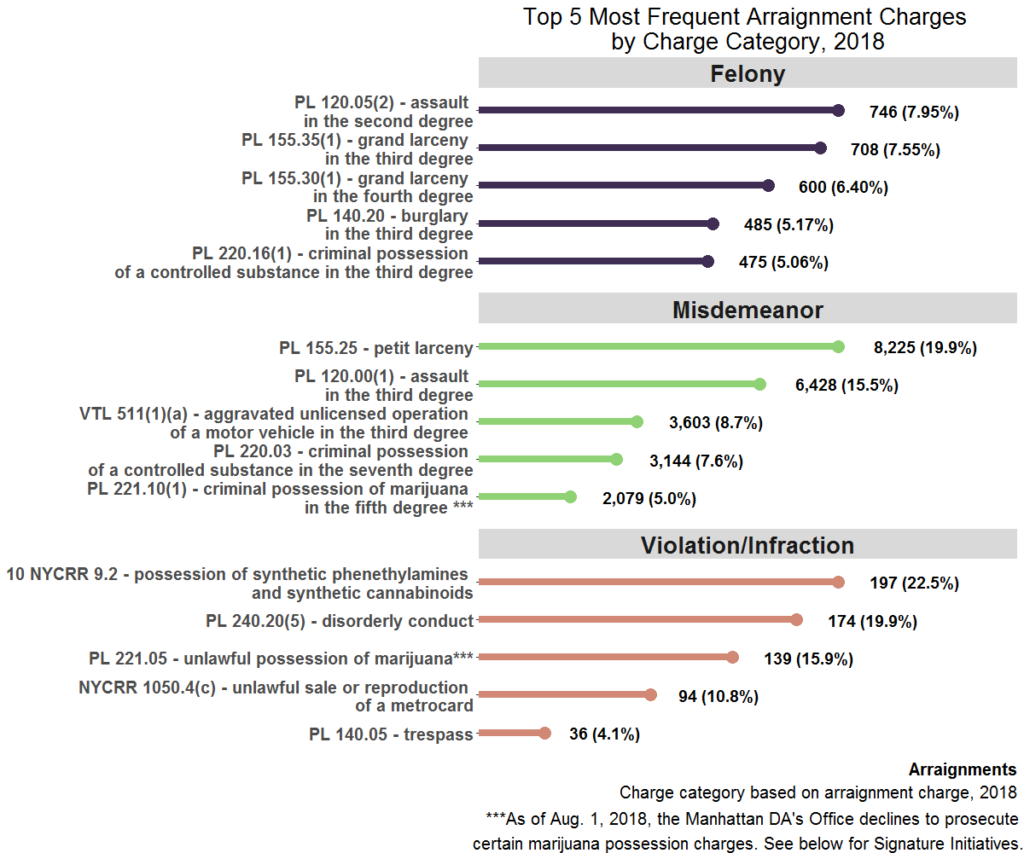 Approximately 42% of misdemeanor cases and 84% of violations/infractions are disposed of at Criminal Court arraignment. Less than 1% of felony cases are disposed of at arraignment. Sixty percent of cases resolved at arraignment do not result in a criminal conviction, including an Adjournment in Contemplation of Dismissal (ACD), which is a dismissal of all charges following a period (typically 6 months) of being arrest free. More than one-third plea to a misdemeanor. 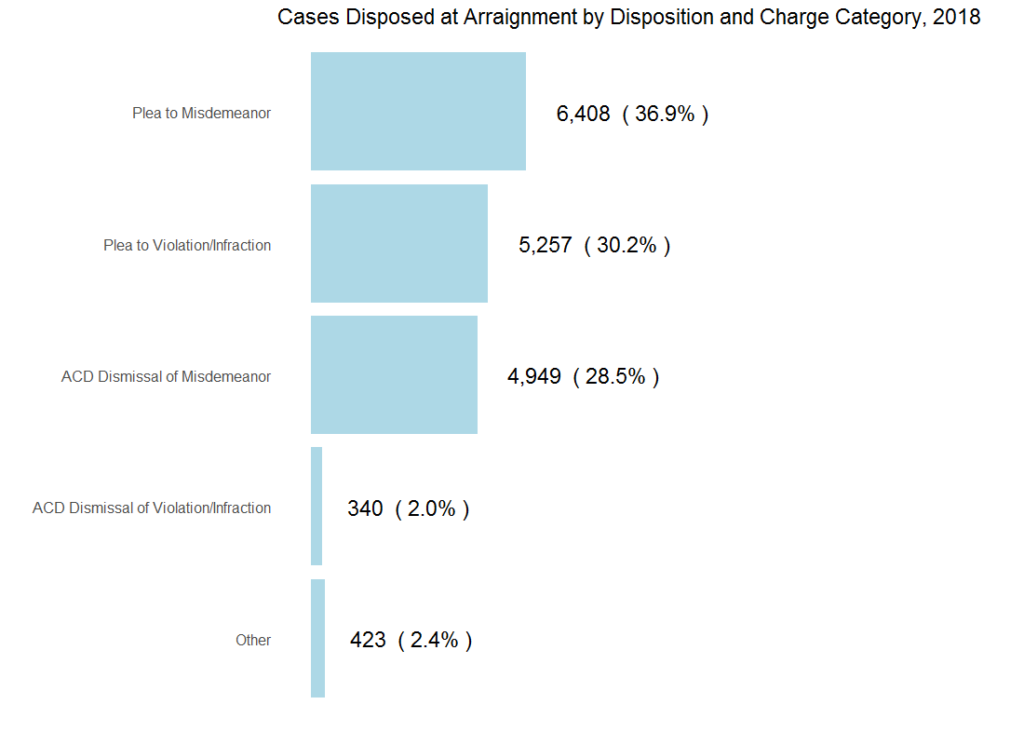 In 2018, for the remaining 58% of misdemeanor cases and 99% of felony cases that continued after Criminal Court arraignment, defendants were either: 1) released on their own recognizance (ROR) with the requirement that they return to court at a future date, 2) released with conditions such as enrollment in Supervised Release, 3) had bail set on their case, or 4) remanded into custody.

In roughly 71% of cases that continued after arraignment, defendants were either released on their own recognizance or enrolled in Supervised Release. In 87% of misdemeanor cases, defendants were released on their own recognizance, while 10% had bail set (see “Signature Initiatives” for more information on the Office’s Misdemeanor Bail Guidelines).

[1] Cases reflect the number of arrests screened through the Office’s Early Case Assessment Bureau (ECAB), and do not include non-arrest indictments and other non-arrest cases. 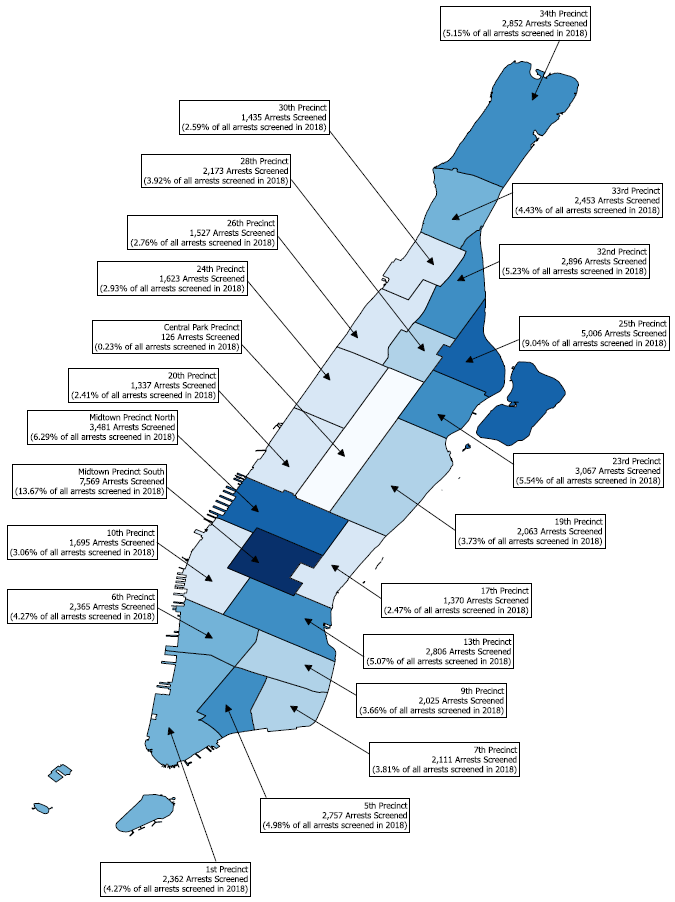 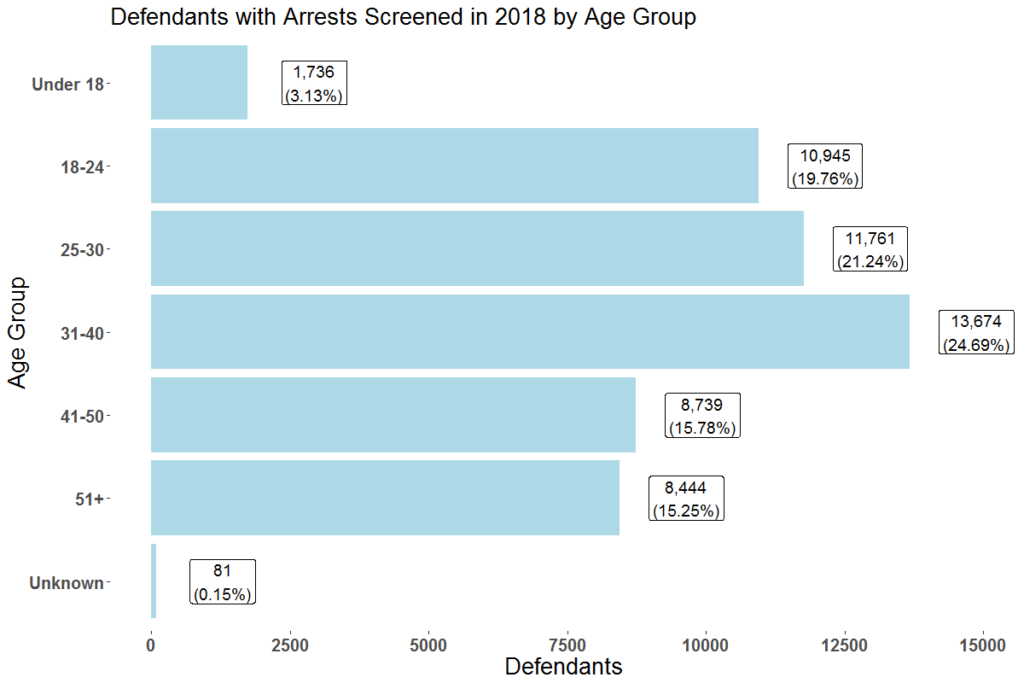 Eighty percent of defendants with arrests screened in 2018 were male, while the remaining 20% were female. 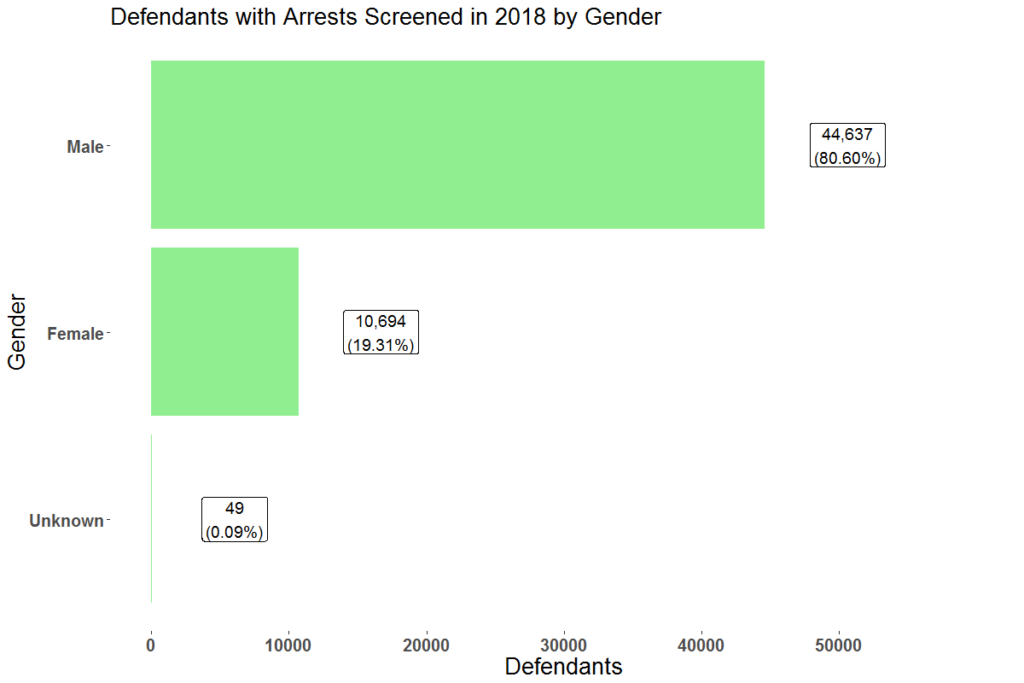 Fifty-six percent of defendants with arrests screened in 2018 were Black, 34% were Hispanic, and 14% were White (non-Hispanic).[2] 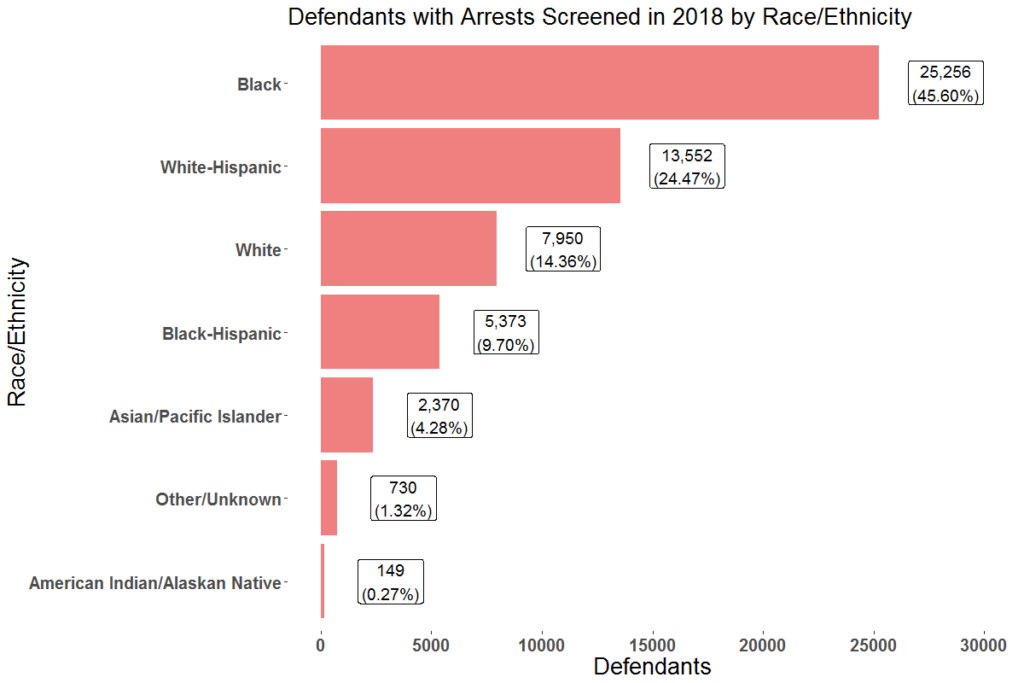 [2] Race and ethnicity data are based upon information recorded by the NYPD at the time of arrest.

The New York City Department of Correction (DOC) oversees individuals who are: 1) detained while awaiting trial, or 2) convicted of a crime and sentenced to one year or less in jail.

On December 31, 2018, there were 1,981 defendants held in DOC custody on a Manhattan case. Defendants in over 87% of these cases were detained pre-trial, while 13% were sentenced to a year or less in jail.

The number of pretrial detentions has steadily decreased in recent years, reflecting the falling crime rates across New York City, changes in bail practices and the expansion of alternatives to detention. From 2014 to 2018, the number of cases resulting in pre-trial detention fell by 23% and the number of jail sentences decreased by 41%. 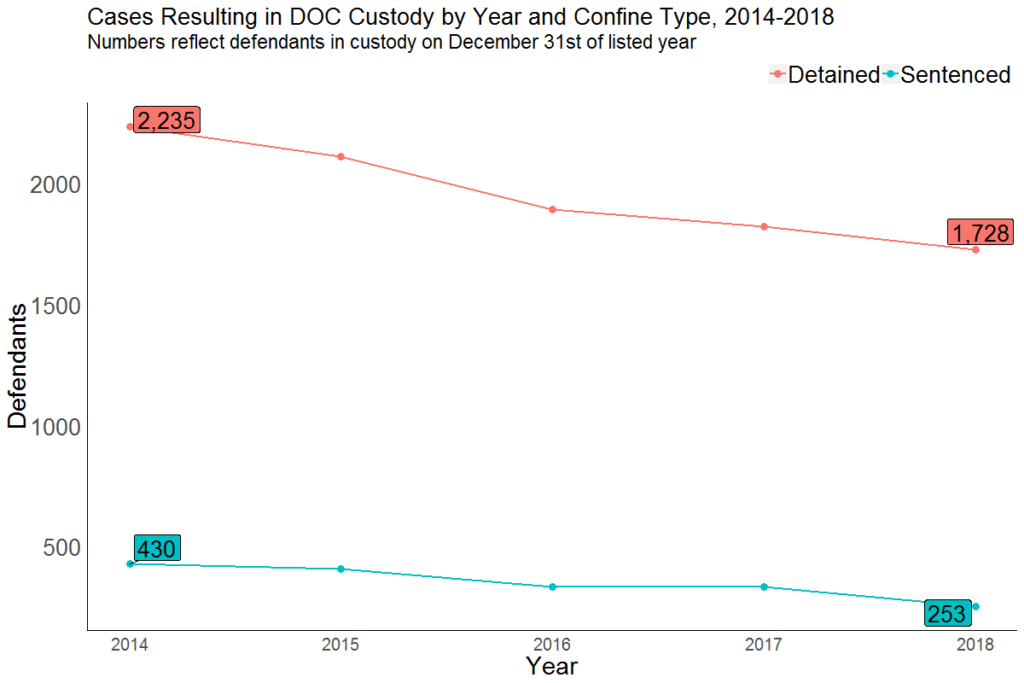 Cases are “disposed” when:

Dispositions at a Glance

In total, there were: 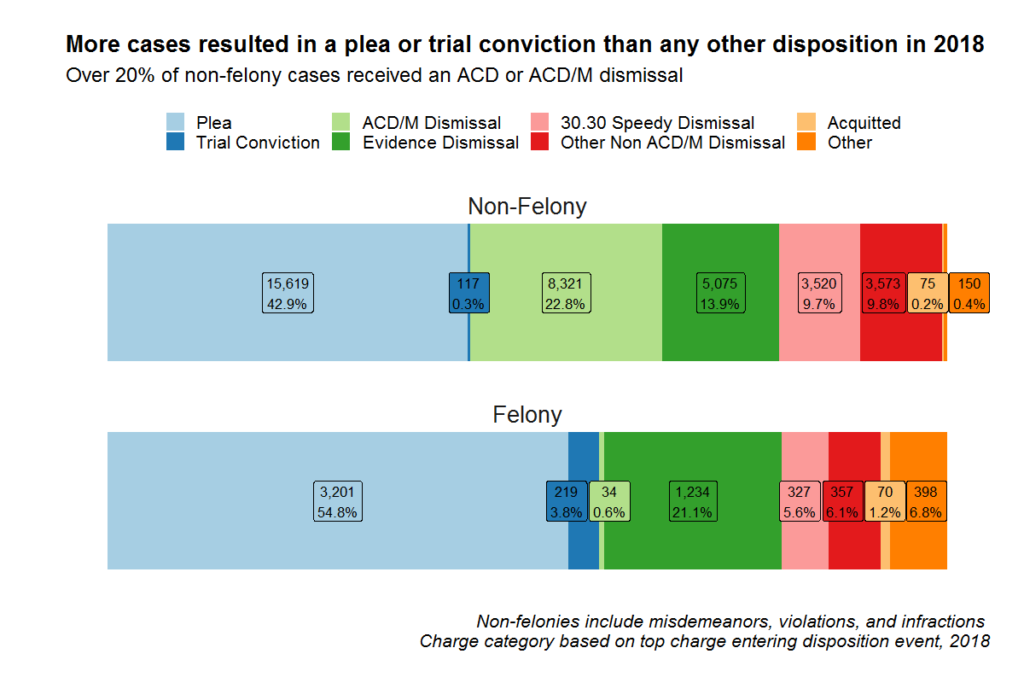 Sentences at a Glance

In 2018, 2,353 (76%) felony cases that resulted in a sentence were sentenced to a prison or jail term. Misdemeanor and violation/infraction cases are less likely to result in a jail sentence, and multiple programs and community service alternatives are available to the court in conjunction with non-jail sentences. 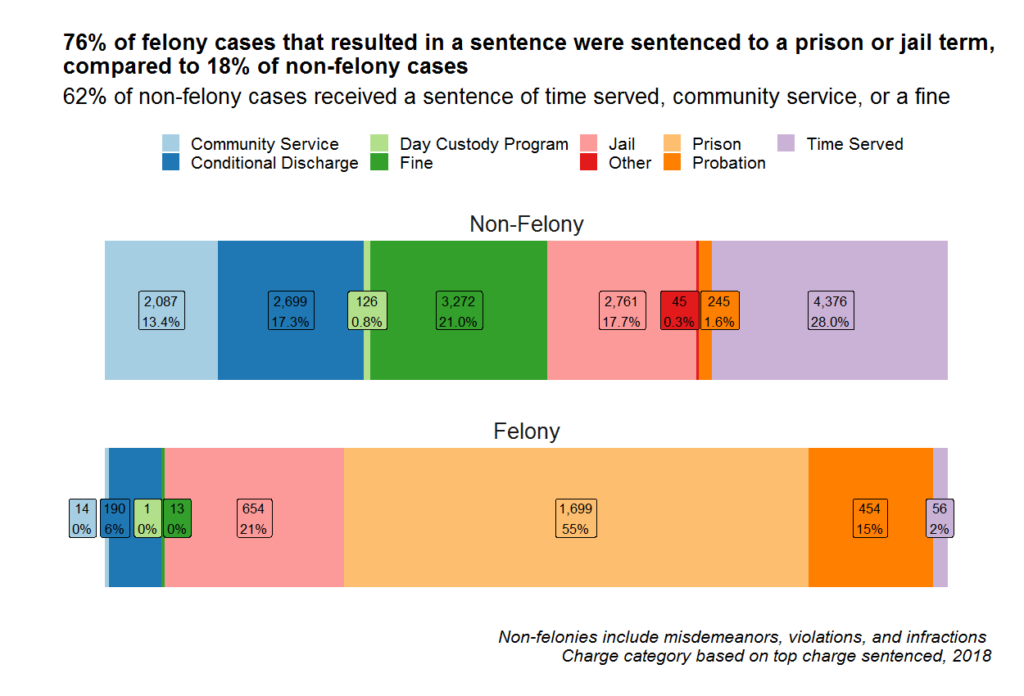 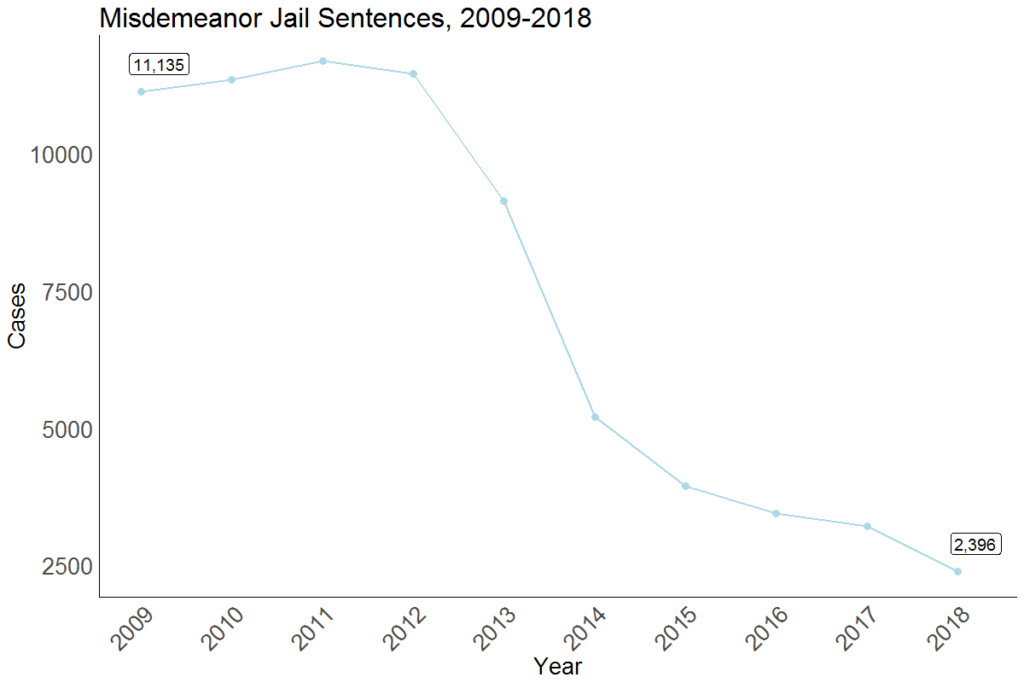 [1] An ACD/M is the dismissal of a marijuana possession case following a period (typically 3 months) of being arrest free.

[3] Charges in this category reference the charge at the start of trial.

In 2015, the Office began working with the NYPD and community-based organizations to implement numerous pre-arraignment diversion programs. Following an arrest, eligible individuals:

Upon successful completion of the program, the Manhattan D.A.’s Office declines to prosecute the case without the individual having to ever step foot in a courtroom.

Project Reset is the largest pre-arraignment diversion program, with 1,773 referrals in 2018. The Office developed Project Reset in 2015 to better serve 16- and 17-year olds charged with low-level misdemeanors, such as shoplifting and trespassing. Given the program’s success, the Office expanded Project Reset to adults of all ages in 2018. 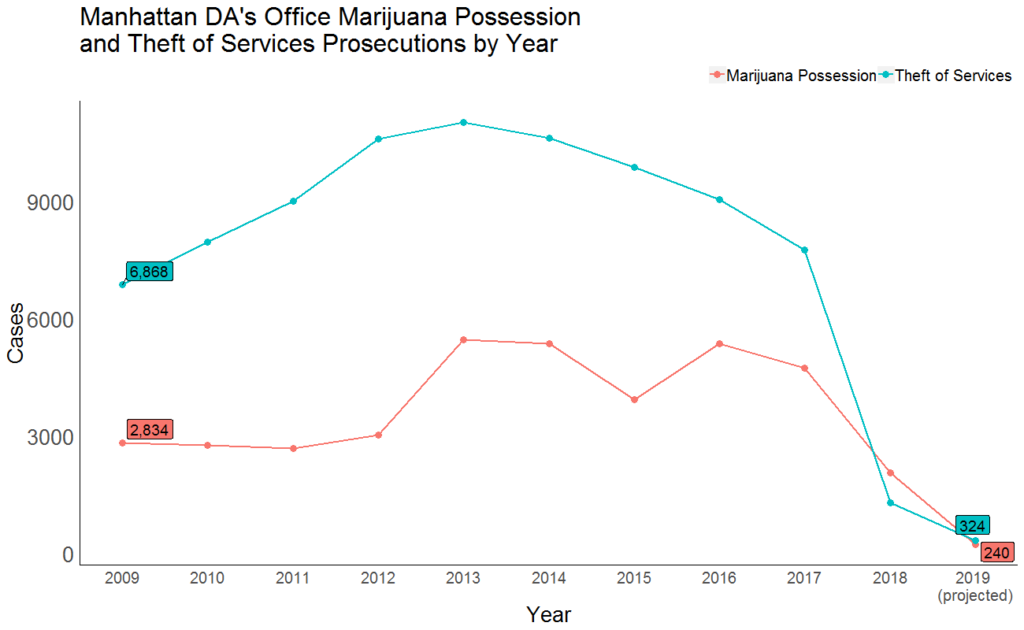